'The Right Way to Make Jams'

In 1993 Ben was browsing through a charity book shop in Bristol with our friend Bob - they were at the Methodist Conference that year, which is why he can put a date to the memory after all these years. I don't know what Bob was looking for, but Ben found this very dated little book, which seemed worth the asking price... 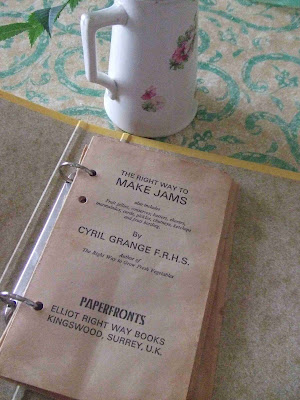 And Ben was off! 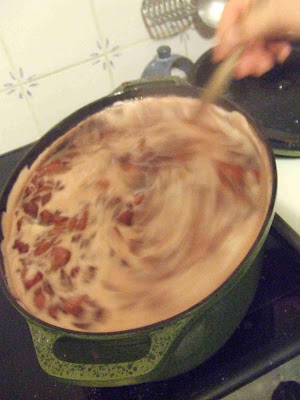 He'd made a few jams beforehand, but always to a generic recipe. This book, first published in 1974, promised more - specific recipes and also advice on how to get it right! 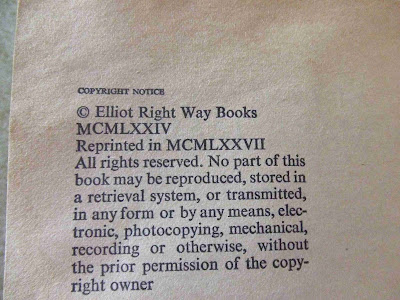 About three years ago the book fell apart, but it's so valuable to Ben that I took it to bits, punched holes in its pages and put it into a little ring binder for him. I wish I'd kept the broken old cover now - it was orange with line drawings on it - very '70s. 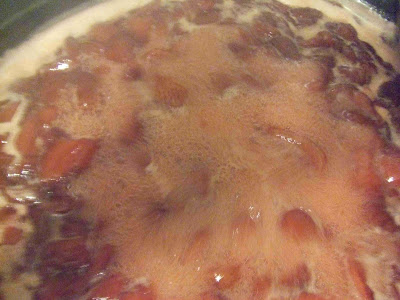 The author is a man, and I think Ben likes that. We've nicknamed this chap Colonel Cyril Grange, although we have no evidence he was in the army except for his very clipped and insistent style. He's a bit of an old bossy boots, but he does know his stuff. 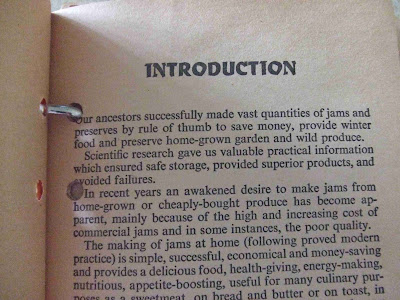 And here are the first fruits of the book this spring! 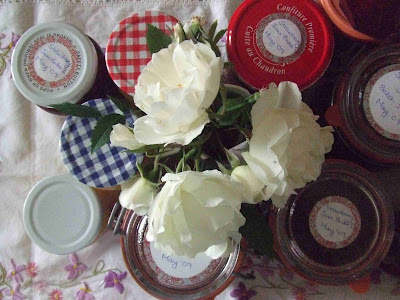 This is the kind of thing Ben finds useful - lots of 'what's right, what's wrong' info, so that you actually understand the process of jam making. 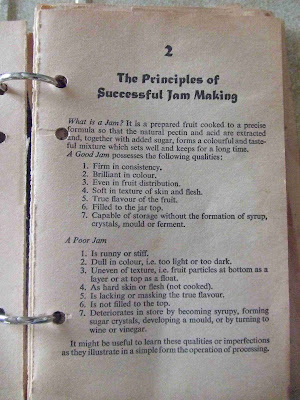 And here is my cute guy himself, with IPOD but without apron this time - instead his T-shirt nicely matches the cherries he's been picking from a friend's tree! (They went off to the Chelsea Flower Show, lucky things, and invited us in to pick their cherries.) 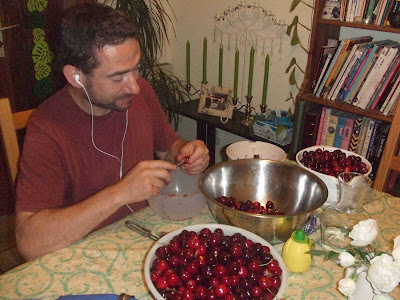 Ben picked mountains of them! We didn't go with him, as Son 1 was having a bit of an iffy day, probably due to the quantity of strawberries he'd consumed in the previous 48 hours... 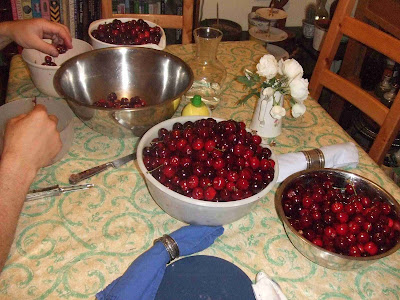 Raja, the faithful hound, lay at his feet as he stoned the cherries, wating for any that fell... 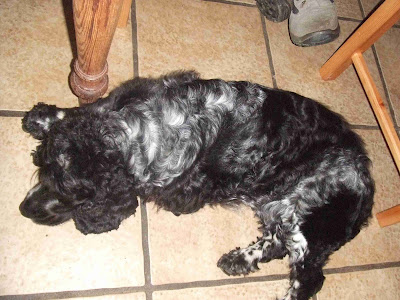 But not many did! 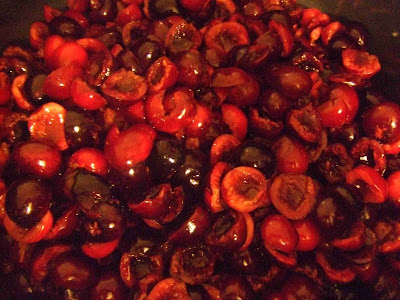 In the kitchen, scary amounts of sugar awaited the fruit... 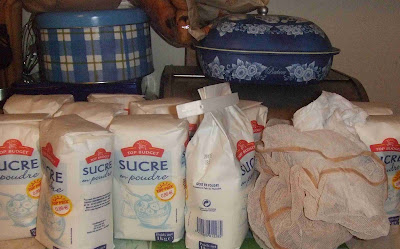 Many of the cherries we pick don't go into jam, because they bottle so nicely. It's a taste of early summer all year round. 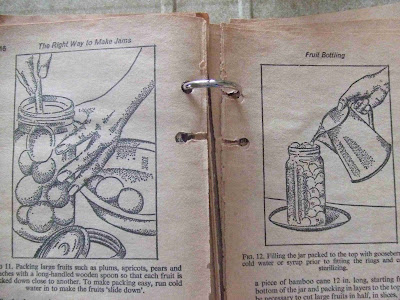 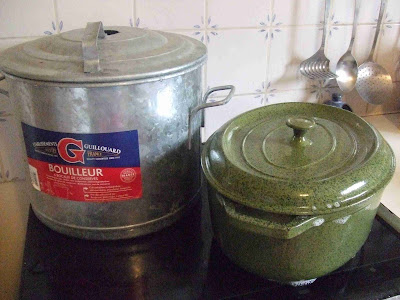 And some were saved for eating now! We taught the boys 'Tinker, tailor, soldier, sailor', and then Son 2 asked, 'Can you make that great cherry pudding tomorrow?' Yes, indeed, this was not Son 'I can make myself sick on seasonal fruit' 1, but Son 'You'll have to force me to eat anthing that's not a banana' 2, asking for a fruit pudding! There was much excitement, and I got out the recipe book to check if he meant this one, which he did. 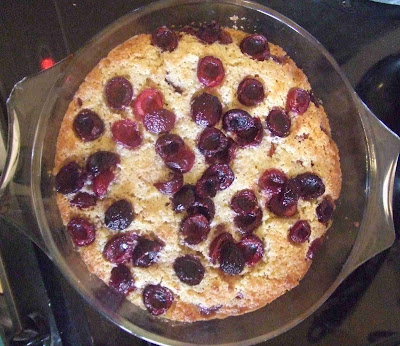 For you:
Cherry Layer Pudding

Cook 3oz (75g) of the sugar and the white wine together, to make a syrup. Add the cherries and poach for a few minutes until the syrup is coloured and flavoured. Drain the cherries, reserving the syrup.
Preheat the oven. Cream together the butter and the remaining sugar. Beat the egg yolks and add with the cinnamon. Stir in the breadcrumbs and the milk. Lastly, beat the egg whites until stiff and fold into the mixture as lightly and swiftly as possible. Layer this mixture with the cherries in a greased, shallow pie dish (starting with a cherry layer), and bake in the preheated oven for half an hour. Turn out, and serve with the reheated syrup and some cream.
I don't normally turn it out - that can cause disasters and there's no point in spoiling a perfect pudding! 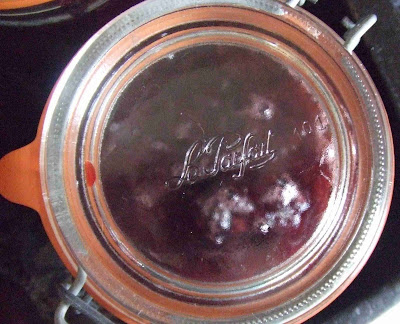 'Le Parfait' weekend, or, as Pa Larkin would translate it, 'perfik'!

You are all invited to my blog Garden Party - see the post below for all the details!
Posted by Floss at 11:42 AM

Floss, Thanks for a great post and the pudding recipe. I believe Phil would like that cookbook. He likes to know the why's and how's, the processes...etc. His favorite chef on foodnetwork is Alton Brown, he uses various methods to teach the viewer the cooking process, history of food being cooked, why you should and shouldn't use certain ingredients...etc. I think your hubby would also like Alton.

Thats a VERY yummy looking cherry layer pudding! Thank you so much for the recipe, we'll have to give that one a go very soon. Just thinking about it makes me drool. And what a fabulous little jam making book, thats well worth preserving ( oh good grief, preserving, hahaha ) any way you can.

That all looks so yummy! I wish I could sit in the kitchen with a cup of tea and help! What a delight that would be! Luv~Betty G~

Oh Floss I just love cherries and will be trying your recipe for cherry layer pudding My goodness how many did you get from the neighbours.... Wonderful x

That's one fabulous man you have there! He picked all those cherries on his own then spent the rest of the day in the kitchen making jam!! I can only imagine how good your house smelt that glorious day. Oh yum! Lucky you, fresh jam on toast, nothing like it.

Mmmmmm. That looks wonderful. Cherries are only just arriving here, but gooseberries are waiting for me in the garden.
Have you discovered the French sugar especially for jam making? It's good.

OOPS! Ben's just read through this post and pointed out that I ommitted the quantity of cherries from my recipe! I've put it in now, but if you did copy it before, my apologies. You need 550g of pitted cherries. How embarassing!

Dear Floss :) thank you for another lovely family weekend post, those cherries look gorgeous and yummy as well! Here the cherries just stopped blossoming and are very small and green, so I'm a bit jealous you already can make jams there - already in spring! The recipe book is really cool by the way ;)

About the trees... it is really cool you showed them to your son - kids always have most unexpected perceptions of things ;)I'm glad the first one looks as if it even can be 'lived in' :) In terms of the second one - when I worked on it I tried to make it more 'alive' than the one representing Suprematism, that's why you can see the warmer colours, more natural ones as well (more of green on the tree & the sun is more colourful as well, warmer background)and I guess there is a bit more shape and movement in this work, it is the direction which is different from the first one. I guess I tried to express less restriction and more freedom, form and colour here in contrast to the first one.

Hello Floss
I LOVE your post as it transports me right back to my Aunt & Grandmother's kitchen in Belgium. They made a lot of jam and fresh fruit based recipes. Seeing your photos reminds me of the scent going through the house as the jam is simmering...BLISS! You really are making the most of living out there! Enjoy it.
Isabelle x

Oh wow Floss, how cute is your Ben? I love that photo, and the one of Raja waiting patiently under the table. Very cocker spaniel. I love the whole process of jam making, I really loved making quince jelly this year. It's funny how our season's are back the front isn't it? We are having wild winter weather here and there you are picking yummy summery fruit. Thanks for the recipe, it looks delicious x

Hi Floss,
First of all, Ben does still look cute without his apron! :).....A very long time ago...when I was studying Home Economics as an undergrad....I received a prize for my plum preserves....but that was the last time I attempted to make any sort of jam....I do love to eat jam though and your cherry jam looks delicious! I hope you have a wonderful day!
Take care, Laura

How lovely for a man to take so much pride in such a hobby. I myself had a bit of an addiction to jam making a few years ago!!! It's just so magical how the fruit becomes something so different that can be enjoyed many months later!

Great recipe. I will be trying my hands at jam making again this year, lets hope it does turn into jam and not boiled sweets again! lol. xxxx

The Queen of Fifty Cents said...

Looks like our husbands could be pals--mine made mountains of kumquat marmalade last fall from fruit we picked at the home of some people I'd met because they were having a garage sale. Of course!

You asked a good question over on my blog, what the heck am I talking about with the door prizes?

I work with children's librarians, and I have a drawing for a variety prizes at the beginning of our monthly meetings. Encourages everyone to be on time!

That looks so good! You are fortunate he likes to make all that good stuff. :)
Glenda

Your pudding looks FABULOUS! And what a dedicated worker your husband is... that is such a time consuming job! My hubby does alot of cooking, too. He is pretty good at cleaning up (I'd say about 85%)!

My Mom's cat's name is Rajah!