Yesterday was Ascension Day, a national holiday in France. Because Ascension is always a Thursday, people often work the Thursday and take the Friday off instead, but the children had Wednesday in school in order to take both Thursday and Friday off - a very long weekend! Today is called the 'pont d'Ascension' - the 'Ascension bridge', taking us to the weekend. Ben worked yesterday and has the day off today, so yesterday it was just me and the boys, following some directions off the internet to a small village nearby which was having a bank holiday Vide Greniers. We parked the car here: 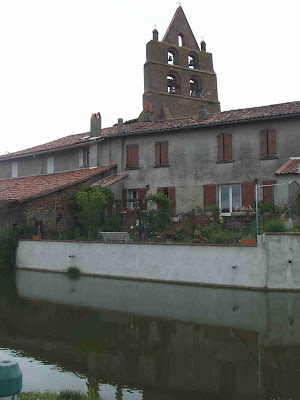 Yes, this village is one of the ones which has its own moat! 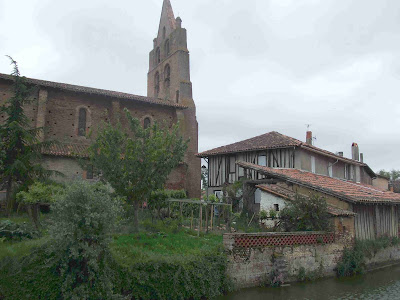 The boys and I had never been there before, but we loved it, and took loads of photos. The houses are built linked together, inside the moat and encircling the church and the village green. It would have been quite an effective defence - maybe against the English! 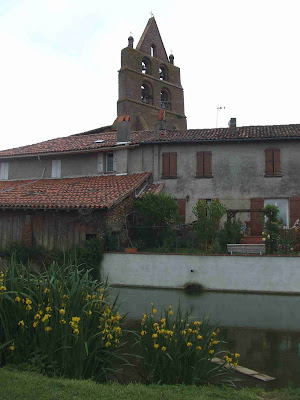 Circling up past the end of the moat, we found the Vide Greniers on the defended and tree-lined village green. Very picturesque. 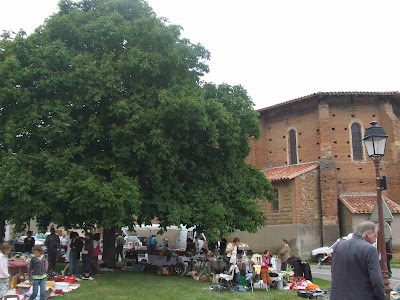 Son 1 bought some additions to his domino toppling kit. Son 2 found absolutely nothing to interest him, so asked to play the 2 Euro Challenge. 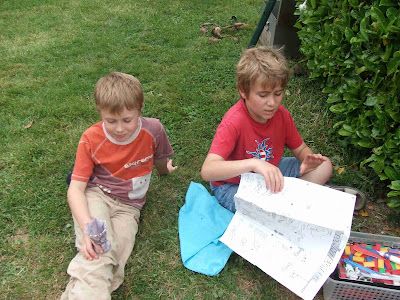 He bought this marbled, pressed glass vase. I don't particularly go for this kind of style, but I think it's rather a good buy, all the same. 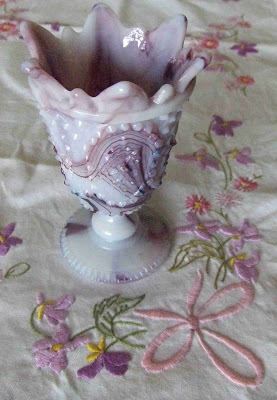 We're going to do some internet research together to find out more about its origins (and to find out if 2 euros was a good price). 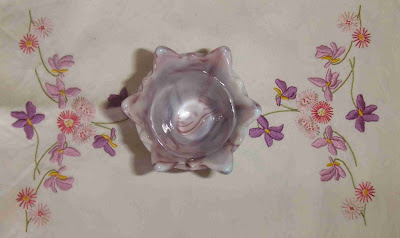 I found relatively little - this blue and white china clip-top jar for the kitchen, 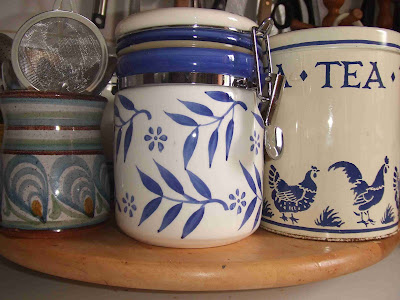 and a sweet little vintage tin for my cloth buttons. 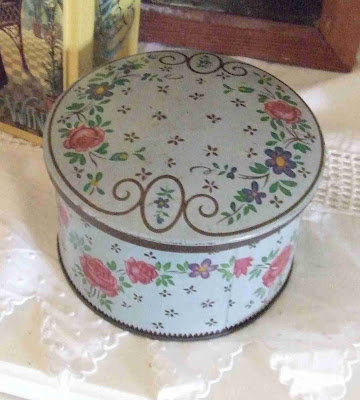 This is the current display of button tins and boxes.

They're on a little vintage lace and embroidery runner I bought in Veti Relais a few months ago. 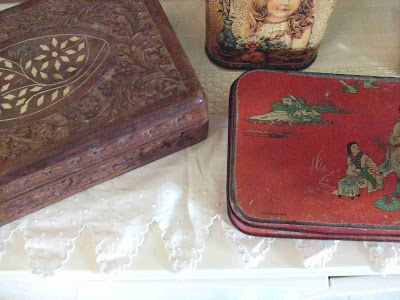 Out in the garden, things got a bit crazy as Son 2's shoes (bought for my sister's wedding last summer) were retired, broken, but I couldn't bear to throw them out... 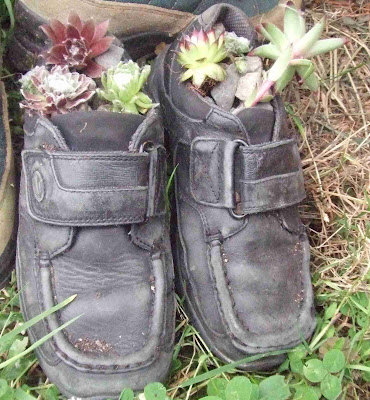 This footwear-as-planter thing is getting out of hand, methinks. The plants should live, Olga - the big boots on the left were planted up a year ago and the sempervivums are thriving. The clue is in the name - most plants wouldn't like to live like this, but sempervivums ('always alives') love to grow in stony, exposed places - the only thing they can't stand is poor drainage. The boots and shoes will rot and fall apart in the end, but it's good to give them a bit more use before they do. 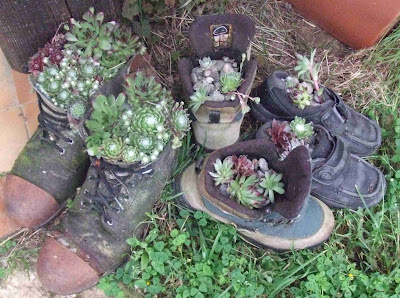 The sempervivums which were on the window ledge have made way for some summer bulbs, which are just coming into beautiful flower. 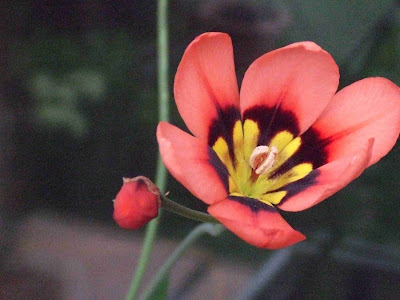 Now, have you noticed that a number of great bloggers are called Sarah? I am going to have to differentiate between my numerous Sarah friends somehow. So, NZ Sarah, of Red Gingham, has involved me in the game she says is: "called 'Desafio'. It's a Spanish word and means 'Challenge' in English. This game is about getting to know each other better. In order to this we must share 7 things about ourselves and then we must send the game to 7 other bloggers. "
Well, in French, this game would be called 'Défi', which shows the close links between French and Spanish, I think! Thanks for the 'défi', Sarah! Here goes on 7 things about me:
I spent my childhood moving around; living in at least three English counties, the United States, and Scotland. My dad was in the Navy!
Ben and I got married when I was 21 and he was 22. Some people wondered if we were too young, but we were sure it was the right thing to do and 19 years on and two sons later we are still sure.
I love chili con carne but almost never cook it any more - somehow our French lifestyle doesn't seem to include it!
I studied Archaeology at University, but am now a trained dyselxia teacher.
I tried knitting a blanket square at Guides once and it turned into a hexagonal doughnut. I think knitting has too much to do with maths for me.
I'm a Christian and my heroes are those who live their faith more than they talk about it.
I am half Welsh, quarter English, and quarter Irish, and my parents now live in Scotland. 'So Breetish' as the French would say.
That's enough about me - these are the 7 people to whom I pass on the 'Challenge':
Josie-Mary
Ashley
Juanita
Fleur
Lululiz
Jackie
Glenda
Have fun, ladies! If you happen to have done the challenge before, just give us a link to your previous answers if you don't want to think up another seven. 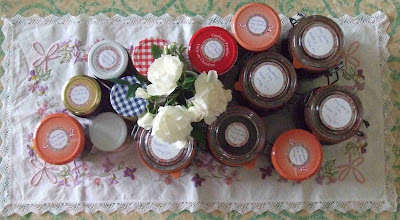 Tomorrow: more of the 'cute guy in the apron' and his jam-making!
Posted by Floss at 2:36 PM

Haha, yes! We are all looking forward to hearing more about 'cute guy in apron's jam-making. Ben sounds like an excellent cook, with all those vegetable recipes you've been handing me via my "vegetable query" posts :)

Phew, when I read on your comment on my blog that you had set me a challenge, I was, errmm, a little concerned, lolol. What a relief that it is something I can do...... I think. Now, do I do it on here in the comment box, or do I do it on my blog??? Sigh, I am so blogging challenged.

As to your son's two Euro challenge, I love it! It is such a pretty colour, and I think " the boy done good ", lol. It looks a bit like milk glass. Oh, and I love your new tin, sooo pretty.

You do seem to find so many vide greniers! I love the blue and white clip top jar, what a find!

By the way, I am totally agreeing with Son 2's pick of that pressed glass vase. And I'm sure you know why...

I love your pictures of the Vide Greniers. The 2 euros game is great the boys seem to have got some great finds.
Love the moated village isnt it just beautiful x

The planted shoes are a great idea. I always feel sad when I have to throw out the school shoes and that seems to be more often than not! I could end up having a whole garden of plant filled shoes!

Floss ~ Thanks for the challenge! I will have a little think about my 7 things and post about it sometime next week. I too have also noticed that there are lots of Sarah's in blogland, in fact I posted about it in my blog under the title Something about Sarah! I hope you have a lovely weekend :O)

Your blogs are a delight! So many lovely images, great ideas (like the planted boots) and a little armchair trip to France. Thank you:)

Well done Floss! I enjoyed finding out a little more about you and your interesting life. I love the blue container and the button tin you found. Actually I have some lovely things I bought at a sale yesterday. I will be blogging about them this week. Have a good day!

Hi Floss :) The shoes to the left made me believe it is possible to grow plants in old shoes :)! They look great - as if they are going to explode with those beautiful plants and also as if they are naturally filled with them - I think it will also happen soon to the other shoes you filled with plants this spring.

You know - I tried to follow your example today going to an 'antique market' (what they call it here in Poland) and do you know what I found? There was plenty of beautiful old pieces of furniture and decorations, BUT the lady selling stuff informed me that everything was brought from the Netherlands - so you can guess about the prices... and I didn't buy anything - it simply wasn't worth it... Lucky you living in France among all that vintage luxury ;)!Cheers

Great finds - really like the jar. Thanks for sharing your trip - what a quaint town.
I made a note to take the challenge - probabley my next post. :) Will also check out your Birthday party more. I am posting on the run today as I am playing catch up.
Glenda