Well, actually, it was the Rentrée, rather than is, but better late than never! We've been busy but I finally have the delightful chance to offer one of my readers this beautiful French magazine in a giveaway: 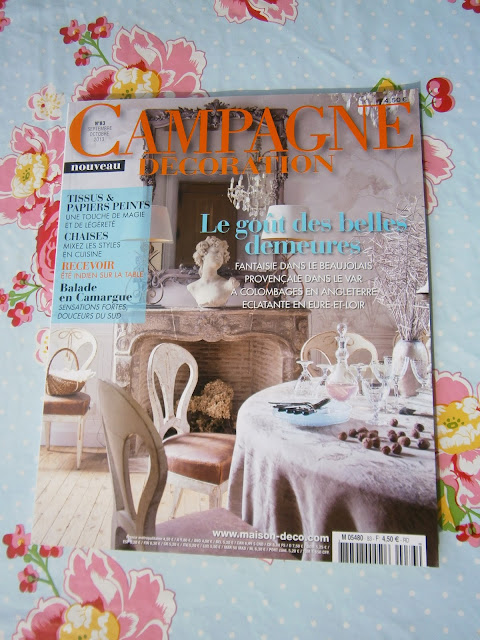 It's up for grabs because my kind local friend picked up a copy of Country Living for me when she was in the UK, so now I don't need to offer Campagne Décoration as an exchange (see post below). Therefore it's my now traditional C'est la Rentrée gift for one of you.

To enter, you don't have to be a follower or anything, although you are welcome to follow if you don't already! Just leave me a comment here to have a chance to win. - I'll post anywhere in the world. If you'd like to share any of your Rentrée Resolutions with us in the comment, feel free, but it's not essential.

Rentrée Resolutions are traditional in France, where Back to School means a really positive New Start for adults too - resolutions made in the sunshine and after a good rest tend to be a lot more active than the ones we make in the New Year! Ben and I have particular resolutions this year based on the fact that he's living away during the week while he studies for an MBA in Lyon.

So my Rentrée Resolutions this year are to keep up the good work on the exercise front but to add some further healthy penny-pinchers to our already wholesome, thrifty ways. (Lol- I can't say the word 'wholesome' seriously, you understand. It's just too, well, wholesome!) Here goes:

We have resolved to buy one bottle of wine for the weekend to share between the two of us - no alcohol to be consumed alone when the other one isn't there! When Ben announced his side of this resolution I felt miserable, and that worried me. I should be able to cope with evenings without a glass of wine. And indeed I can...

Take a packed lunch every day, instead of giving in to the occasional panic trip to a boulangerie - if you had access to lovely French bakers I bet you'd be happy to pop into them at lunch time too, so this is a harder one!

Make 'portion' desserts at home instead of buying yoghurts and cakes. I think this should be the subject of my next blog post!

So, please enter my giveaway and do tell if you have any resolutions - best of luck it all!
Posted by Floss at 10:38 AM 11 comments:

Oops! My dad gave me some birthday money to update my Country Living subscription, and I did it too late! I am now having withdrawal symptoms thinking about that lovely October issue which will NOT be landing in my post box... Would anyone in the UK be prepared to post me that edition, in exchange for this? 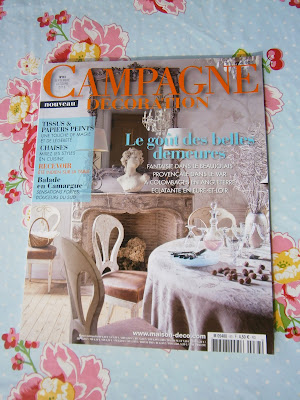 Lululiz and I think that it's one of the nicest country decor magazines in France. Please form an orderly queue if you would like it!
Posted by Floss at 10:30 AM 6 comments: 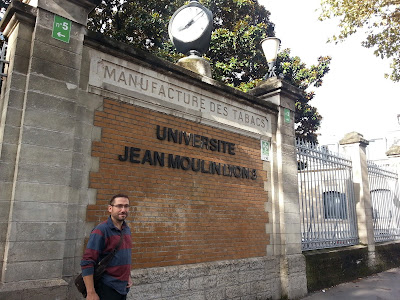 Ben's lectures in Lyon start today! He's taking a break from work (partly funded by them) to do an MBA. He's really fallen on his feet for accommodation, as a new colleague owns a flat near the university which he can't currently live in - so Ben is his paying guest! It's a whole lot nicer than a student flat, I can tell you... He's coming home every weekend, but the boys and I do hope to pop up there every now and then, to get to know another part of France. We will keep you posted!
Posted by Floss at 10:30 AM 3 comments:

Our mantelpiece is rather calm at the moment (for me) but it seems to draw people to study the various images... 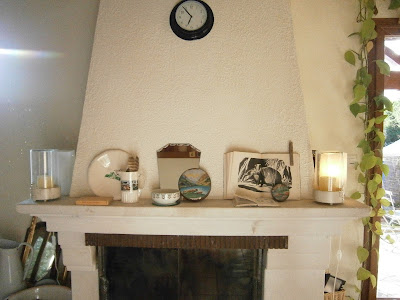 I asked Son 2 the other day: "Are you OK? Are you LISTENING to me?" (classic mother question...) He replied vaguely: "Yes, but I'm just looking at those badgers..." 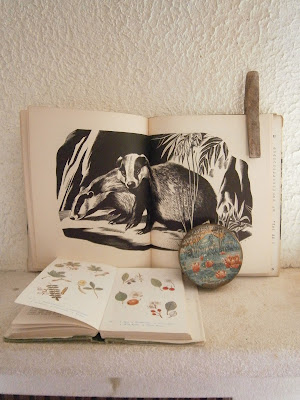 Well yes, I think they are worth gazing at too! They're from an English book of nature through the months. 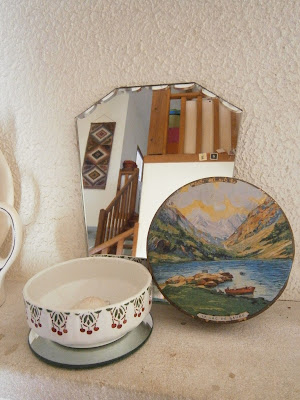 This French dressing-table mirror is my latest find, from the charity shop. It's sitting with a few other favourite French discoveries. 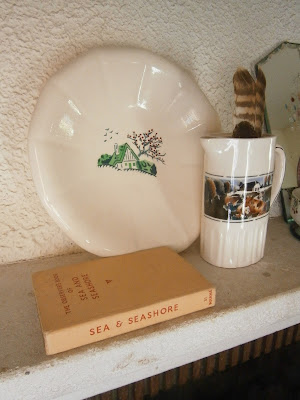 The little jug is also a September find - it has cows in a field on it. I guess I've grouped together various countryside scenes, French and English, and am rather pleased with the results. The large feather in the jug comes from a Spanish bird - Son 1 picked it up in the Picos de Europa last month. 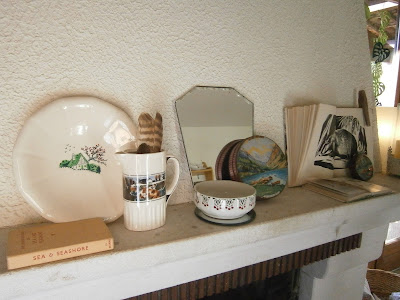 Hmm, a peaceful, countryside display. Just what we need for la rentrée!
Posted by Floss at 5:31 PM 9 comments:

As it's la Rentrée (back to school), I thought I'd just give you the run-down of the current residents of our home! 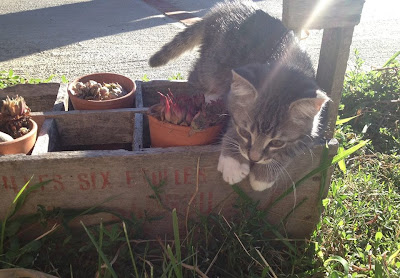 Youngest first: Wilson the kitten arrived approximately four hours before we left on our Spanish holiday. He mewed and mewed in our neighbours' empty garden (they were already on holiday) until we took pity on him and presented him to our house/garden/animal sitters, who took the adoption of an untrained kitten in their stride! He must have been over 2 months when this photo was taken by them, but we all thought he was younger - he must have been rather malnourished. Lots of kittens get abandoned around here, but young Wilson has landed on his feet - we've already had him vaccinated and chipped, and Raja has adopted him as a playmate! We are all in love with him...

So next up for age must be Son 2's guinea pigs - if I get more time, I will add more photos. His piggies are called Lysandra, Catrina and Hester (well, what else do you call guinea pigs?) and he loves them very much.

The three big hens are next in age - we are getting three eggs a day from them at the moment! Wilson is wary of them...

Then come the two ornamental hens, who were adopted when a friend returned to the USA. One is just a smaller version of our big ones, but China, the white silky bantam, is a sight to behold... they also lay fairly well, but less than the biggies. We eat a lot of omlettes, here!

Chanel the adult cat comes next. He is at least 9 years old and is theoretically an invalid, as he has broken his hip twice. He has calmed down a bit, and we keep him inside a lot, but he still slopes off to visit neighbours, and, I am sure, gets fed by them... Six Dinner Sid! He was most unimpressed when Wilson arrived, particularly as Wilson was missing his mum and tried to get some milk from Chanel!

Raja is a few years older than Chanel. She is Son 1's adopted cocker spaniel, and has changed his life for the better in so many ways. I mentioned 'hen therapy' to Lola Nova a while ago (she agreed it exists) but dog therapy is wonderful, too...

Then comes Son 2 - at 14 he is two years older than Raja! He is in his exam year, the final year of collège. It's all a bit much for a kid who is juggling an enthusiasm for Pokemon with spots and adolescence, but we're confident he'll get through it.

Son 1 is 16 now, and in his second year of lycée. It's a better place than collège. He's specialising in science, with as much history as he can do on the side, but sadly, from his point of view, he still has to read French literature!

There's a really big gap now until you get to the adults in the household. Probably the youngest adult is Achilles the tortoise. I've roughly counted the rings on his shell and he seems to be in his 30s. He's got the wisdom of age, certainly - he gets out of his enclosure and goes for wanders, so now we've written my mobile number on his shell, and we get the occasional phone call from an excited family who've found him chomping through their garden...

And now we come to me, vintage-loving English teacher. You know me!

And finally Ben, who has an adventure of his own starting next week. His work is funding him to do further studies - he'll be off in Lyon during the week for the next nine months, coming home at the weekend to see how his family and other animals are getting on! We're all very pleased that he's got this opportunity (it's to do an MBA) and hope to be reporting on a little bit of life in Lyon, as well as in the Toulouse area, over the coming year.
Posted by Floss at 10:45 PM 8 comments: