St George's Day on the beach! 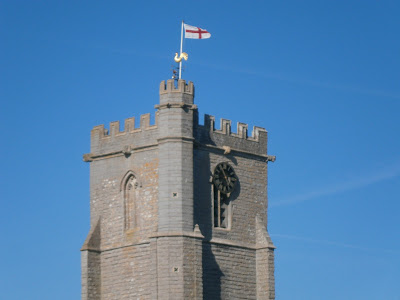 We celebrated in England, for once - Ben is back home but the boys and I are staying with his parents in Somerset. 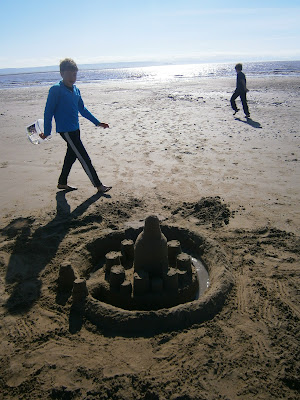 This afternoon the sun was shining and we had a thrilling time making sandcastles on Burnham beach. 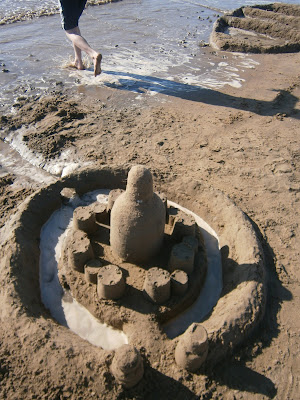 The tide came in and the boys were thrilled and horrified in equal measures to see their moats filling up with water! 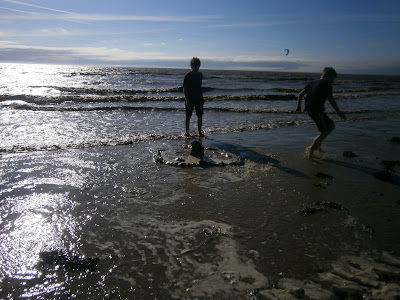 There is nothing like the sea when you live in the centre of southern France...
Posted by Floss at 11:33 PM 5 comments:

A Flurry of Vintage-style Dresses!

I do like vintage, but I haven't worn vintage clothes all that much since the 1980s (when I was a devotee of little white lacy blouses, of course)! 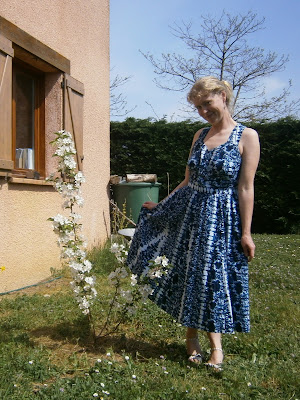 However, I've had an exciting few weeks tracking down vintage and vintage-style dresses in the charity shops and braderies of spring-time France: 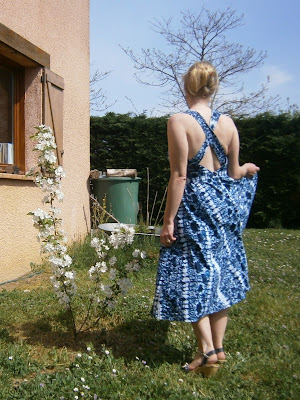 This one is really super - hand made and very new, despite the vintage-style. Don't you think it looks nice with my 6€ sling-backs from the local braderie? Sadly, it seems to have been made for Marilyn Munroe, and I've done some pinning around the top and will have to get stitching and taking in... 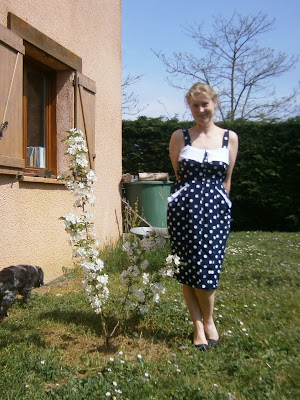 This little cutie seems to have been made for Minnie Mouse - but it fits me very well! 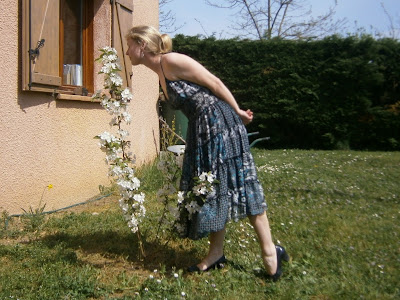 This one isn't really vintage in style, but I do like it and it will come camping with me and appear un-crumpled from a rucksack, which is a huge bonus! 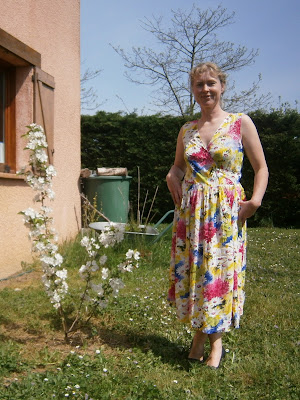 There's a belt on this one which I need to adjust - it looks fine now, but I think it will look nicer once it's belted! It's really the oldest dress - properly vintage, whilst the others are just 'in the style of'.
﻿ 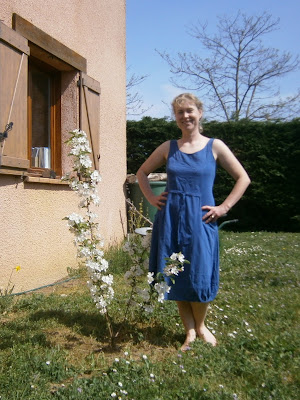 And finally, I did buy one second-hand modern dress, which is going to come in so handy on a daily basis, I can tell you!

Which one is your favourite?

With thanks to Della and Kezzie, whose fashion blog posts made me realise that I surely could manage to put the timer on my camera, but who usually manage to avoid water-containers and wheelbarrows in their own wonderful photos!
Posted by Floss at 9:32 PM 16 comments:

An ABC of my life in France, right here, right now!

A is for animals – I have been thinking a lot about hares recently - I love them. I spotted one in February, went looking in March but didn’t see any, and then sadly found a dead one on the road this weekend. They are all around us here, but almost completely hidden from us. Wonderful, reclusive, animals. 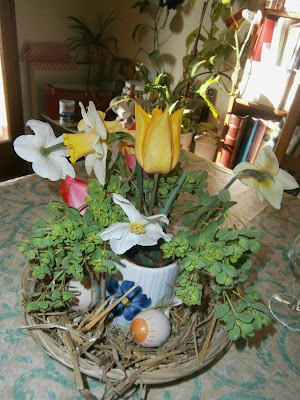 B is for birds – they are singing again, and the hoopoes are back. Last week they were hoo-hoo-ing from the top of tall posts as they looked for their mates. Now they are quieter, so I think they found them!


C is for crutches – Son 2 ended up on them last week, just as Son 1 is reaching a complete recovery after his knee operation…


D is for Downton Abbey – we borrowed the first DVD from work, bought the rest at Christmas, and I have now even made a new local friend (American) as we unite in search of someone in the area who has a copy of the 2012 Christmas special. No spoilers, please (I’ve seen enough on my friends’ blogs, anyway…)


E is for eggs – we have plenty, and the boys seem to be capable of eating as many as the hens produce! I find that I’m buying less meat now that so much of our protein is provided by eggs. 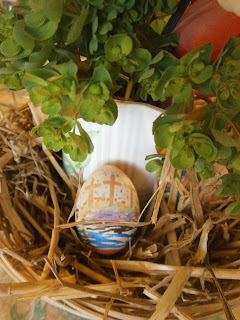 F is for Facebook, which is proving a very convenient way for English speakers in the Toulouse area to keep in touch – my last four pupils have all found me through Facebook!


G is for the garden, which is water-logged but blooming!


H is for the Hunger Games books, which Son 1 talked me into reading over the Easter period – very impressive, and addictive too!


I is for ironing – I taught Son 2 to iron shirts a few weeks ago, as he’s looking for extra pocket money! This is going to be very convenient… 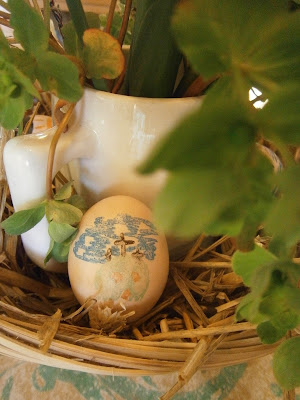 J is for jaune – a yellow packet of licorice sweets which a trainee gave me this morning, because they are traditional to Toulouse!


K is for keeping a record of all the good things that happen – however busy I am, I am glad that I have my gratitude journal for a daily record of the good times, and my blog for a chance to share and keep photos and stories of our life here together in France.


L is for lessons – I am enjoying work with pupils and trainees aged between 4 and 54, so there’s never a dull moment!


M is for Marriage – we’re going to a good friend’s wedding soon, and are so excited for her – more to follow…


N is for nest box – China the funny hen has been shut out of hers, as she is broody again! She goes broody so often that it’s tempting to get her some eggs to hatch one of these days… but then what?


O is for ordinary. This is just ordinary life – same old, same old, you could think – but how pleasant it is to think about all the interesting things that happen in an ordinary life. 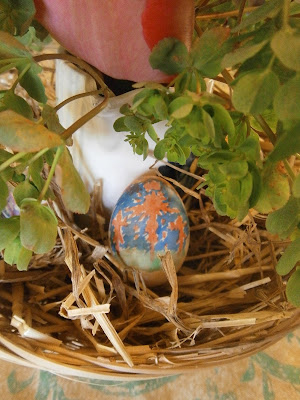 P is for blog posts– I really don’t seem to manage many at the moment, but still enjoy reading those of my friends, and even meeting some new blogging friends - hello to my newer followers!


Q is for Queen Elizabeth II – I have a jubilee tin or two on display in the living room, and realised how very British it all seemed when my new American friend came to visit…


R is for really muddy – that’s our front garden, including the path! It’s forced us to act on something we’ve considered for ages, so we should soon be getting some work done to have a driveway and path put in to the front garden.


S is for the Simnel Cake I made on Easter Day, with the British marzipan left over from Christmas! 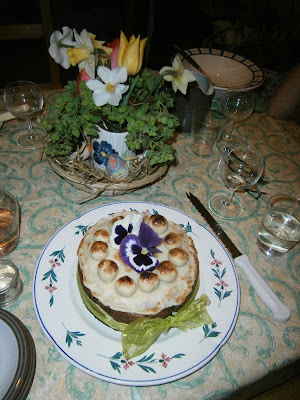 T is for Achilles the tortoise, who is out of hibernation but still seems to think that the days are made for hiding indoors – no summer-time rambles round his enclosure yet!


U is for growing Up! Our boys are growing up like wildfire – even little Son 2 is approaching my height now, and losing some of the puppy fat that has ‘dogged’ him (did you see that, Ang, did you notice it?) for the past few years. And Ben and I are appreciating getting more mature in the good ways, whilst holding on to the fun side of youth, obviously… no point in being TOO grown up!


V is for Vide Greniers, of course! They are starting up again now that the weather is, in theory, more spring-like. We have a lot of weekend projects and not much spare money, but I shall visit a few and shall share my finds with you, friends!


W is for washing machine- ours has broken down again! Fortunately, Intermarché is only 2 minutes away and has a launderette, while we wait for someone to come and sort out the machine for us… 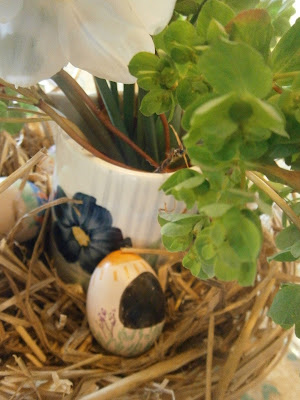 X is for X ray – Son 1 has what might just be a final check-up in June, so hopefully all will be quiet on the leg-bones saga from now on.


Y is for yellow – the daffodils were severely hit by our late snow (not as late as the UK’s I know!) but the yellow tulips are just fantastic this year!


Z is for our local zoo/safari park – just a wonderful place to visit whenever the boys and I are looking for a wander. How nice to have a local tiger family…
Posted by Floss at 2:48 PM 6 comments:

Continuing an Eastery theme, I have learned a bit more about the table service I picked up in a charity shop for the huge sum of 40€! 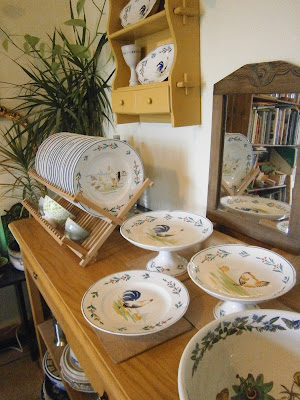 As you can see, this set with stencilled/hand painted hens, chicks and cockerels is quite large - it must have originally been a 12-place setting, with several sizes of lidded bowls, serving plates and fruit/cake stands on pedestals. A few are actually cracked. The platter has been used and used and used again. There are chips on one or two items. But the rest is in super condition, and we are now using the plates every day. 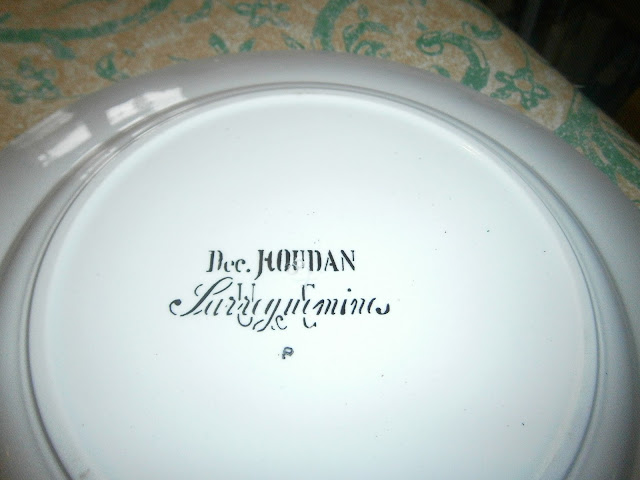 I turned the plates over one evening and started Googling the text on the base of each item. As you can imagine, it wasn't exactly easy given the curly-wurly writing, and the first thing I had to do was type in 'faience', which is the name for this kind of pottery. A great list of the faience manufacturers of France pointed me in the direction of Sarreguemines, which is apparantly what that stencilled writing says! It's one of those towns that kept switching between Germany and France in the nineteenth century, and remember that date, folks, because that's when this pottery mark was used! 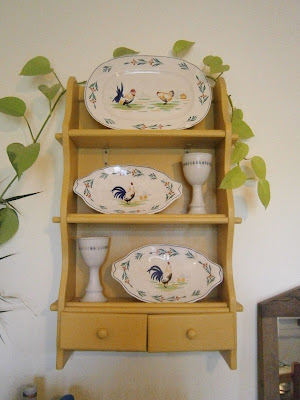 I was pretty certain that the pottery must date from the 1930s-1950s, because nearly everything I buy does, and the design certainly isn't 'Victorian' to my mind - too simple and even faintly modern, I'd have thought. But I guess that it was based on the lovely hand-painted pottery of rural France (from Quimper in Brittany to Martres-Toulouse down here), and that its simplicity doesn't imply a recent date. 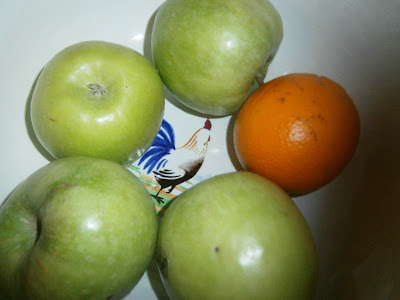 I called Ben to see the results of my research, and we began to get a bit worried, because what if I'd accidentally bought something that is too good to use and to put through the dishwasher? 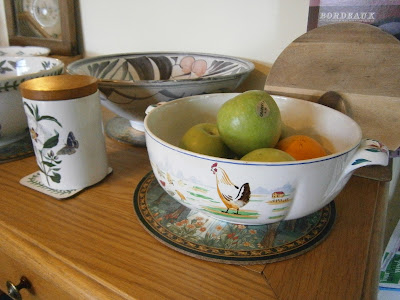 Our final conculsion is that, although the set must add up to being worth quite a bit (a lidded bowl like the one above, whose lid I've put on the shelf above, could be worth about 90€), if we're careful with the big pieces, never use the cracked ones, and stack the plates carefully in the dishwasher, then I just happen to have bought us the best quality but also most useable table service that we will ever own! 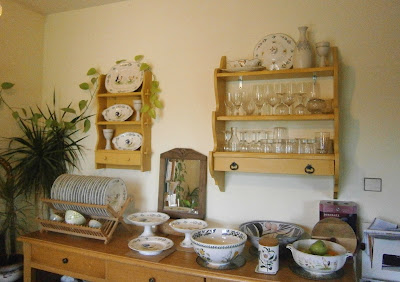 It goes well with the other handpainted, Denby or Portmerion pottery that we have collected over the years, and we have ourselves a collection!
Posted by Floss at 6:48 PM 10 comments: