I've been making various little goodies using vintage and antique machine lace, recently. I began with a collar my mum had passed on to me, and when I'd used it up, I realised I had to get buying. My only lace at home is the exquisite hand made stuff I've collected over the years, and that's not for crafting! You can see two examples in my title header picture. 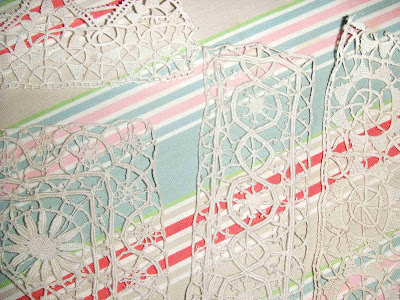 Anyway, I decided to look on my local ebay (ebay.fr), for whatever was acceptable quality and cheap postage. 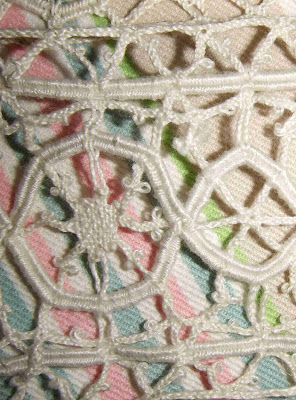 And I discovered a flaw with ebay lace buying: the photos!

OK, this tiny one is just one that I took from the site after the purchace - there was a bigger one originally. But I honestly was unable to tell the style, quality or nature of the lace from the photo. It was just a good bargain and some interesting shapes so I snapped it up. It arrived and turns out to be the hand made needlepoint lace shown in the two photos above! I really like it, and I am going to be able to use it for crafts, but I won't cut it up - far too lovely and hand crafted.

So I am basically reduced to treating ebay as a kind of brantub/lucky dip thing - put on a bid of a euro or two and you have no idea what's going to be sent to you! The collar above turned out to be made of extraordinarily fine tape lace. 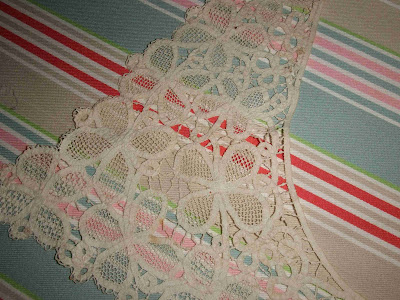 Come on, vendors, I can take a photo of it which shows its quality, so surely you can, too? 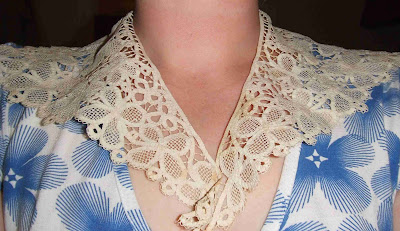 I think they probably don't really value this stuff, or know the difference between hand and mass-produced lace anyway.

But of course I can reap the benefits of that, I hope. This one, which is really pretty, turns out to be of much poorer quality. Various styles of machine lace put together with net. 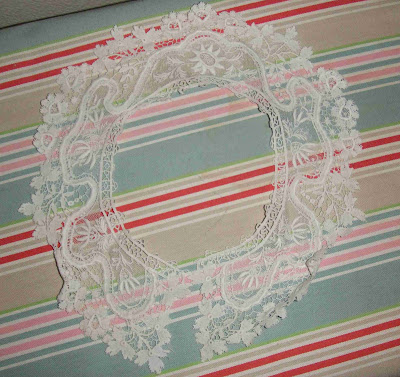 But it does sit very sweetly! 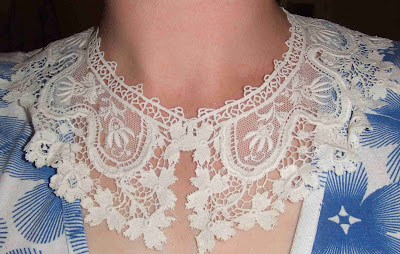 It's one I'll be happy to cut up, though, as I won't be desecrating the work of an earlier craftswoman.
So, what did we do on our sunny Wednesday evening? 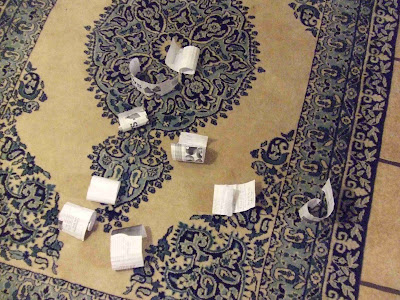 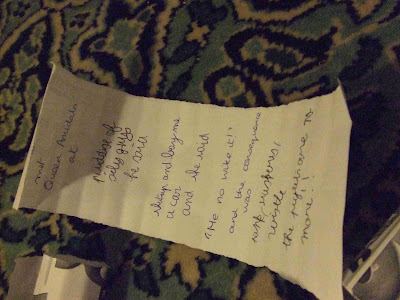 I'm alternating between posting French and Scottish news all this week, in the run up to my 100th post 'Auld Alliance' Giveaway. This is post 97, so it won't be long now...
Posted by Floss at 9:25 AM

You still got yourself a couple of good deals from eBay nevertheless!
Lace is such a statement of femininity, in my humble opinion; to make it, and to wear it. But I must be wrong, because didn't "men in the past" wear lace too? (I see that in ancient portraits.)

How frustrating trying to buy lace! Thanks for your comments on my blog. I think you should give zips ago. They aren't that bad really, maybe don't try curved ones first up :)

How kind of you.Thank you for understanding ours.Welcome to our blog at any time.Bless you forever.

Hi there, I hope you dont mind, but I've added your blog onto my blogroll.
Take a look at the swaps I'm hosting on my blog, you may want go join.
Take Care
Love Melanie xx

Hi Floss, that would be great if you could email a list, I will get them typed up for you.
My email address is

P.S, Remember to include the type's of books you want and the condition your books are in if this is possible.
Thanks Love Melanie xxxxx

Thank you for your comment Floss
I would really be interested to know the name of the mysterious yellow funghi.
You have managed to find some really lovely lace. I think you are quite a canny shopper.
I know what you mean about photographs on ebay.
xx
sumea

How gorgeous vintage lace is, and it's always stunning how much work has gone into it. I really enjoyed looking at those posts.
Hmmm, you may be right about the sauce... I'll see how it goes tonight.
thanks re the slow cooker recipes offer. I'll have to get going with it and see how I do. I'm going to have fun with it.

I found your lovely blog via Posy and thought that I would pop over and say hello:O)

Oh I agree about the jug, no idea why they thought yellow would sell over blue or pink?! I have had a look at your lace and it is lovely, I think anything with about 3 or more things in it can be called a stash!! :D XX

Gosh, it is staggering the amount of work that goes into such beauties. So worth while persevering with Ebay Land.

lovely lace Floss, i managed to get some at the weekend as well so was really pleased.
thanks for your comment on my blog - i listed all of the prices i paid when i put the pictures on the Shabby Chic forum http://www.shabbychiccafe.com/f15/french-fancies-3484/page4.html we picked up a book in a tabac/newsagents called l'agenda des brocantes. it is produced by region and lists 100's of brocantes, would definatly reccomend you try to get a copy for your area. MM xx

You're very brave to cut up your lace. I won't touch my pile of vintage fabric!
Look forward to seeing what you do with it all.
Deb x
PS: I'm happy to swap books with you via Melanie

If you click on the photos you do get a slightly bigger photo.

Really beautiful, Floss! I like your blog very much, so I added the link to my blog - hope you don't mind! ;) By the way if you are interested in lace you might check out Burano lace, which is hand made and is made in a unique way.