The Pilgrim Way to Santiago

In 2011 I found myself by accident on the pilgrim route to Santiago. I snapped this photo of a pilgrim's scallop shell in the little shrine on the back road, which is actually only about 20 minutes' drive from our house. 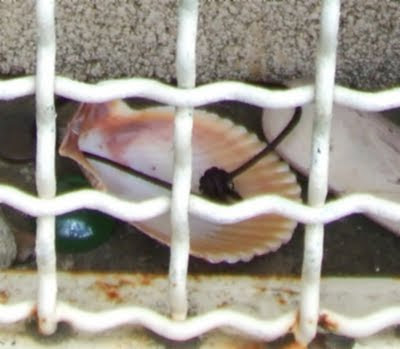 Just over two years later, we headed quite deliberately to the end of the pilgrimage - Santiago de Compostela itself. You can see my photos of the Baroque frontage of the cathedral in my previous post.
Ben and I paid to go up into the museums which take up some of the rooms around the cathedral, and I snapped this photo of pilgrims and tourists together in the square. You can spot the pilgrims because most of them are lying down! They have had to walk at least 100 kilometers to get there, or cycle 200, and most of them had probably done more. You can see a huge pile of rucsacs in the middle of my photo, with a few pilgrims watching them as their fellows head off - maybe into the cathedral, or maybe into the well-stocked city pharmacies, which advertise a great range of foot-care products! 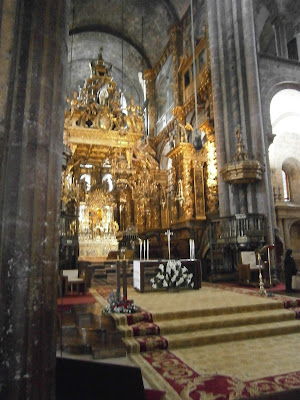 The sense of arrival must be wonderful. The Catholic pilgrims go to confession and mass, and everyone mills around in the cathedral, which has quite a sense of bustle and awe, probably as it has done for the last thousand years. This photo shows you what you can see there: 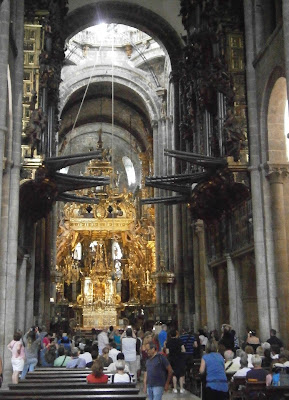 But this photo gives you a much better feel of the place! 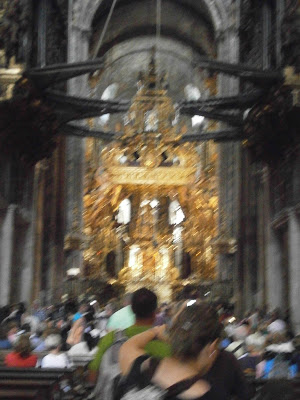 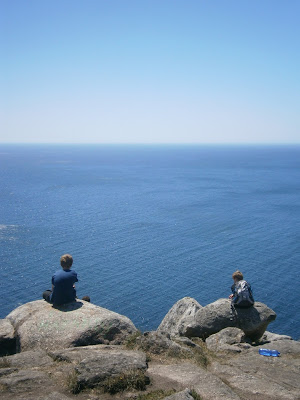 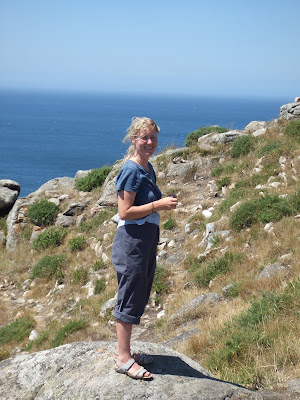 Pilgrims traditionally continued walking until they got to the true end of the road, on the blustery cape of Fisterra, or Finisterre. 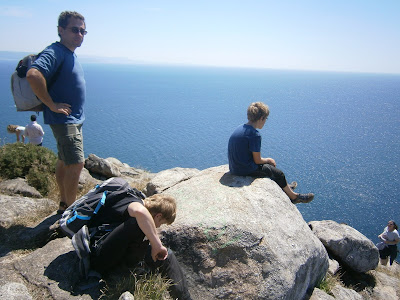 There they burnt their pilgrim clothes - Son 2 is investigating the site of a very recent fire, composed mostly of boots, he informed us. 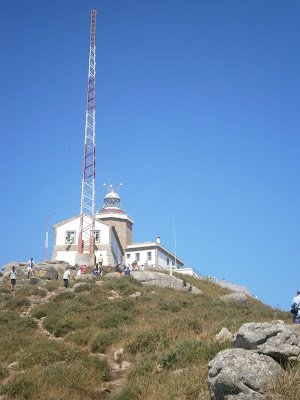 Nowadays, as well as pilgrims and tourists, there is a lighthouse and a radio mast. 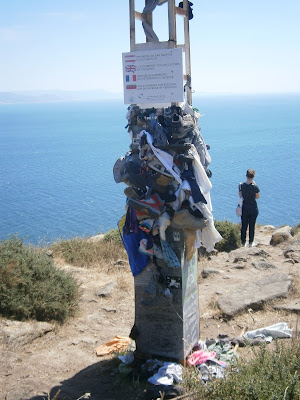 The sign says 'Do not leave clothes on this radio mast' in many pilgrim languages... 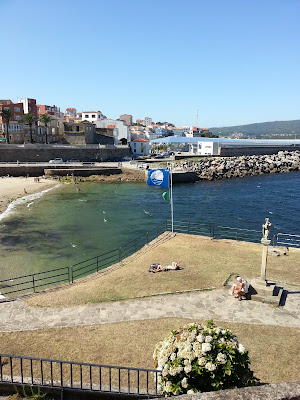 ﻿
The town of Fisterra is just tucked into a bay behind the cape. Here the pilgrims stopped in medieval times to pick up the scallop shell which would show the world that they had completed their holy travels. And here Son 2 dived in the cold, cold waters of the Atlantic and found... 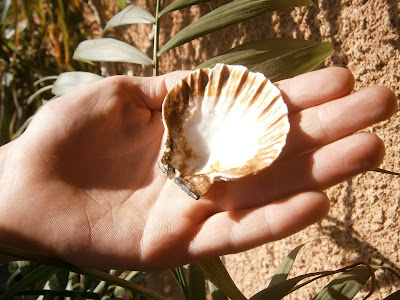 Not surprisingly, our travels around the northern coast of Spain involved visits to some beautiful churches. 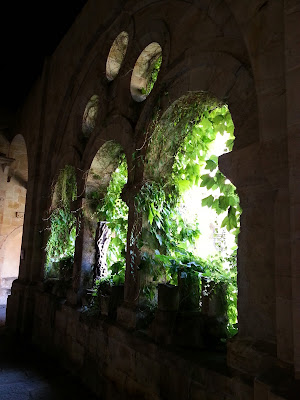 The ivy-draped cloister at Santillana del Mar was one of my favourites. 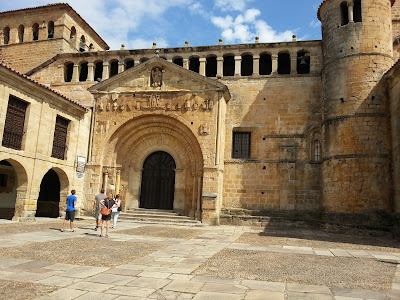 The outside of the church in that medieval town was also beautiful, but didn't quite compare to the Baroque splendour of Santaigo de Compostela in Celtic Galicia: 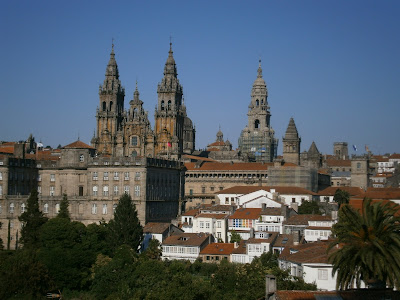 We visited the cathedral by day and returned at midnight, when Celtic music was playing and locals or visitors were dancing in the square: 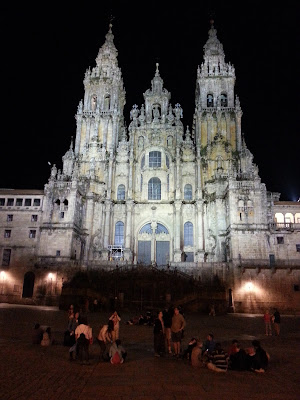 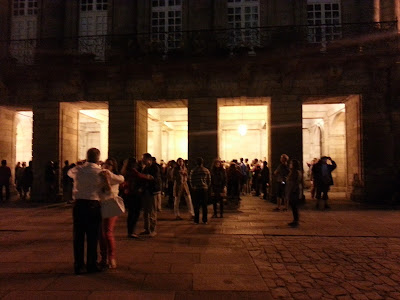 Even on our road-trips between campsites we encountered incredible churches. We parked our car and trailer in front of this edifice when we popped into a small town to find some much-needed toilets! 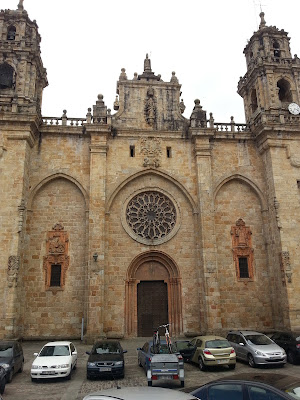 There are plenty of ancient churches in France, but they are seen more as historic monuments in our secular country. We enjoyed spending time in a country where faith seemed at least as important as tourism!
Posted by Floss at 12:00 PM 8 comments:

Coming round the mountain in a vintage skirt!

We did a camping tour of the northern coast of Spain this month - another lovely chance to chill out with the family while visiting some wonderful places. 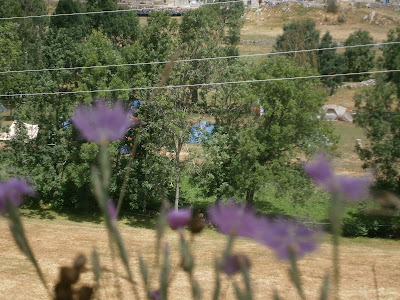 That's our tent, hiding behind the cornflowers, at the bottom of a high valley in the Cordillera Cantabrica. 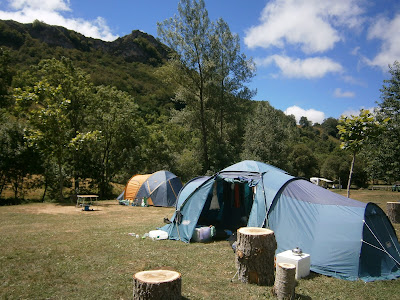 This campsite was our favourite - lots of space and free mountain-goat jumping displays at unexpected times! 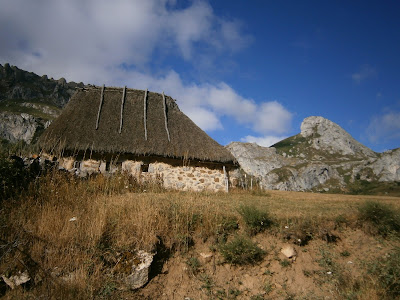 Both at the campsite (available for rent) and higher up in the valley, these herdsmen's huts called brañas are a feature of the area. They are thatched with dried broom! We saw the local cattle and a lot of farmers, out and about making hay. Choughs flew around us as we walked higher up the valley, and we spotted vultures and eagles on the craggy mountains. The bears and wolves kept their distance, though... 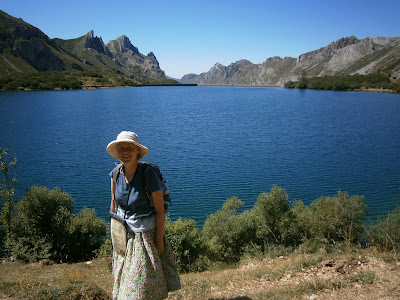 At the high, and rather distant, end of the valley was a beautiful lake. We took a (very quick) dip in it and Ben snapped this rare glimpse of me in this year's walking gear - yes, I was the only walker on that popular route who had combined hiking boots with a vintage floral skirt and a tie-die T-shirt.
Posted by Floss at 4:31 PM 7 comments: