An English Family in France, leading a Minimalist Vintage Life?

We've bought a house! A little north of Lyon, and pretty close to where we're currently renting - we've decided that our move to Lyon is going to be a long-term one. 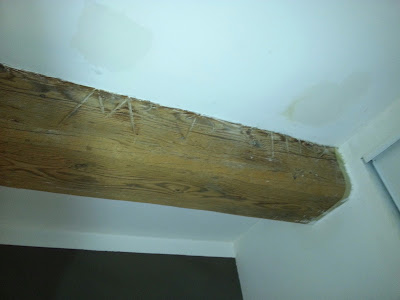 This is the beam in the entrance hall. If anyone can interpret the carved letters and numbers, please let me know - we haven't moved in yet so haven't really had a chance to study them yet.

We move in March. And this is the point about the title of this post - the house is (quite deliberately) smaller than the ones we've lived in since we came to France in 2005. When we moved up to Lyon, despite getting rid of quite a lot of stuff, we still found ourselves opening boxes and asking ourselves, 'Why on earth did we even BRING this with us?'

And as the desire to own a smaller (but characterful) house crept over us, it became clear that we would have less storage space... stands to reason, doesn't it?

As a committed collector and, let's face it, hoarder, someone who sees the wonder in the little handmade fripperies of the past and in fossils and in old newspapers and in fabric-covered boxes and in vintage tins and in... (insert vintage item here) and in not letting things go to waste, I HATED decluttering.

I probably still hate it now, but I have been doing it with a lot of pleasure for almost a year now. Why? Because I'm not decluttering, I'm doing rational minimalism. The 'rational' bit, coined by Joshua Becker of Becoming Minimalist, is important. He points out that minimalism isn't just a style choice, with nothing on the walls and a few items of uncomfortable furniture in the house. It's much more whatever works for you, in terms of holding on to all that is best in your life, and letting go of the rest.

Once I got into this philosophy, Marie Kondo (I know, laugh, 'Only keep it if it sparks joy') also made sense. Her ideas are only funny if you take them out of context. In fact, her books are about setting yourself free of the guilt you get when you let things go. I think guilt was a big factor in my keeping things. I thought, 'This is good, so I must keep it'. The other factor is that Ben and I wanted to raise money for the local refugee charity, ActForRef, so we had one Vide Grenier stand, which turned into four Vide Grenier stands, and one table at the local Brocante/Flea Market. Other people donated stuff too, and with our sales plus theirs, we made around 1000€ last year for ActForRef. When you see people loving your stuff, when you know they're going to really appreciate it, and when they give your chosen charity good money for it, it's not so pressing to keep hold of it.

The rewards of making money to help refugees are instant. The rewards of having less stuff at home took a while to filter through, but suddenly, I realised that I was taking considerably less time to do the housework, and in general the house was tidier with no real effort. This is new in my life! And it's a real reward.

In preparation for the move I'm running one more round of The Minimalism Game, an idea I picked up on last May. I've played it so far with friends from Mums Space France, a group on Facebook. This month I've set up a group on Facebook which anyone can join - and at least one blogging friend is already a member! If you are on Facebook and would like to join the group, either to play or to be nosy, you are very welcome. The group is called Minimalism Game, February 2017. Click on the name to find it - maybe I'll see some of you there!