At Christmas they eat lychees on the island of Réunion ! 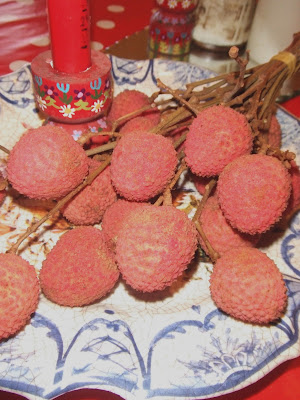 Our neighbours spent many years living on Réunion, and now their younger son has returned there. They received a parcel of lychees this week and Nellie called me over the fence to come and partake of the bounty.


I’ve never had fresh lychees before, and they are great. I had to take a photo quickly… there’s no way they’ll last until Christmas here!


We’ve had some wonderful neighbours over the years. A kind reader might suggest that this is because we deserve them, but actually I wonder if playing the piano at midnight, having the odd scream at or between children and running a farm-style front garden truly make us good neighbours… but over the years, we’ve known real friendship and kindness from those who’ve lived next door to us.


In Cumbria, we had Dave and Maggie, a young middle-aged couple who sorted us out in all our ‘first house’ disasters – Dave found us an old bath when we did up our bathroom, and Maggie taught us about the folk music of the fells. In North Tyneside we had a succession of young women living in the flat below us, who put up with Ben practicing his trumpet at night and invited us round for curious food and sociable parties. In Harrogate our neighbours honoured us by chopping down the high hedge that they’d planted because they didn’t like the previous owners of our house! We shared the cherries from our tree with them on the only year it actually produced – they couldn’t believe they’d been living next to a cherry tree all these years.


On moving to France, we met with real kindness. The neighbours of our rental house spoke some English, and had real fun initiating us into cassoulet and all the wonders of living in this part of France. Serge and Nellie, our Réunionaise/French neighbours here, are sweet and generous. It took both families a while to work out how to be cross-cultural neighbours – in France people don’t talk to their neighbours much, I’m constantly assured, and when we did weird things like inviting all the locals to a bonfire party we were accepted but considered rather odd! So sometimes Serge and Nellie don’t talk to me for weeks or months, and I have to remember that they aren’t shunning me, but just behaving normally for France. But at other times they give us food (and indeed, we give them food too) and they have taken to giving us leftovers for the hens, which is just fantastic! They’ve set up a little table by their fence and I sometimes find a bowl of rice or a pot of shredded lettuce on it in the morning. What a very nice way to live with your neighbours.
PS The internet connection is back! What a relief...
Posted by Floss at 12:56 PM

Sounds like you live such a magical life. I don't have good neighbors nor am I one, mainly because of our topography here in Virginia. Each home is placed on a side of a mountain. I'd have to yell to the top of my lungs to get any neighbor to hear me let alone see me! Still, what fun it would be to find interesting items on a table next to the fence as you do..

I don't have good neighbours too :(
Lychees are nowadays very common in our supermarkets,you can easily find them into those fabulous fruits hampers people give for Xmas or New Years's Eve.
x

Like you, we have been blessed with wonderfully good neighbours down the years. Such friends are a gift

ps havent there been some Great 'Pauses' already this year??!!

Our French neighbours are lovely ( a collection French, Dutch, Brazilian,Welsh and English, if truth be known) The French families were full of admiration when we invited everyone round soon after we moved in..... it has cemented some good friendships. Jx

I haven't had fresh Lychees in years, lucky you!
I loved reading about your neighbors. We have some wonderful ones now. We share freshly baked goodies, I pass on my daughter's hand-me-downs to the younger neighbor girls, we help each other when heavy things need moving. All in all, the 3 houses close to us are filled with great people who have become good friends. We are thinking of moving next year and it will be hard to say goodbye to our street and good neighbors!

We are lucky we are part of a close of just 9 houses and the neighbours are all lovely.

It didn't used to be that way - the previous owner of our house caused all sorts of problems - on moving day the police were here to keep the peace and the weekend after we moved in a party was held to welcome us to the close!

French neighbours were so kind to us when my husband was in hospital, inviting me for meals, cutting our lawn etc. But the French will always be a bit more detached, I think.

Hi,
I found your delightful blog. I added you to my blog roll and RSS feed. I am really enjoying your posts and cozy site. Id love for you to visit my blog and perhaps to add me to your blog roll, Happy Holidays

Your comment about French neighbours being more distant is really interesting- I'd never noticed it before, but we've had similar experiences. I'm glad I wasn't offered lychees...I really don't like them! And of course you can link to my post about Practical Action: the more people who read it and maybe give something, the better!

Yes, relief indeed to have your internet back! I adore fresh lychees & am fascinated to see them still on their branches..how delicious! They are so scented & fragrant. I must admit...that I "asked" for the right neighbour when next door last changed hands & much to my surprise we had Margaret move in with her two children. We have had the loveliest friendship for the last decade or more & now we have Charlie too our "borrowed" cat : ) Much love Catherine x0x0x

What I would do to get a bunch of fresh lychees... They are my childhood favourites, among other tropical fruits.

I have a very lovely pair of neighbours here, and I will be sad to leave them.

Fresh lychees are really tasty and we live in a large enough town to have numerous ethnic shops so we do have them sometimes. It sounds as though you have had some interesting neighbours. Tolerance is definitely key, and I knew when my neighbours teenagers 'enjoyed' playing their music loudly that it wouldn't be many years before my own would be following suit!