We had a lovely Christmas - thanks for your kind greetings! Ben decorated the cake, although I wrapped the chocolate parcels! Ben also cooked a delicious capon from our friends and neighbours who farm across the stream from us - he was busy in the kitchen while the boys and I laid the table and generally pottered. In the evening we took Raja for a walk around the Coulée Verte in the dark - a lot of fun with torches! 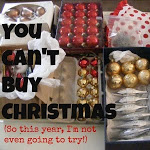 As I took part in this Christmas challenge, run by Kelly who now blogs here, I thought it would be a good idea to run a quick 'bilan' (assessment, usually of costs) of our 'less spend' Christmas. We didn't buy any wrapping paper, but I did buy a few cards, which isn't like me. We'd missed out on sending any cards at all over the last two years, and I really wanted to keep in touch with friends and family who might be feeling forgotten. We made jams and jellies, dried chilis from the garden, and created Christmas decorations and shopping bags as gifts. I bought some books second hand and one new but reduced. We supported the school fund-raising by buying boxes of organic (but unfortunately not fair trade) choclotates as gifts, and gave the niece and nephews fair trade chocolate bars to go with their vouchers. We did the Sakado project which involved me and the boys buying various gifts and necessities for homeless people, and donating the filled rucksacks to an organisation which gave them out in the centre of Toulouse last week. That was a good feeling. The boys wrote personalised messages to the men who would receive the rucksacks, and I was really proud as they overcame their aversion to anything that looked like 'work', writing a message that would make the recipient realise that someone cared for them. 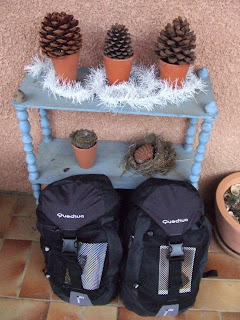 For internal consumption, our capon was expensive but worth it, for taste, for low carbon footprint, and for supporting local, friendly commerce. We bought the rest of our food using vouchers and careful attention to supermarket's special deals in the weeks running up to Christmas. I suppose we saved at least 40€ that way, which is just over what the capon cost! We did spend out on family Christmas presents, but aimed mainly for things that were really needed/will come in handy over the next year - Son 1 gave Ben books on Spain, where we intend to holiday, Ben bought us all a fruit drier (more on that in future) and I got the boys cycle computers, camping gear etc. I then splashed out on a CD for each of the males - Adele, Birdy and Emili Sandé, because we have all been enjoying great British female singers on French radio this year! The rest of the gifts were second hand books and DVDs which I picked up in charity shops and on the fabulous For Sale, Swap, Wanted and Giveaway in Toulouse and Surrounding Area Facebook page. And the most appreciated/most used gifts I gave? Four Calvin and Hobbes cartoon books from the Stockbridge Shelter Charity Bookshop... The whooping and cackling continues...
Posted by Floss at 10:10 AM

What a wonderful Christmas you had AND gave to others!

It sounds great! I love Calvin and Hobbes - especially the snowman scenes!

It sounds like you had a thoughtful and enjoyable Christmas. I shall blog a little about mine when I am home again. But I'm afraid we have been unthriftily hitting the sales in the UK. Still, back to normal in a couple of days. Happy New Year, dear Floss.

Hi Floss! I'm so glad you had a nice Christmas! Have you ever shown us a photo of your dog?

Hello Floss! I really like this review, it's great that you put thought into being more economical and joining in this challenge! I didn't buy any wrapping paper this year- I've recycled all that I had already, bags, wrap carefully saved AND took all the wrapping paper that was going to be chucked in the bin that covered the tables at the school fair and used it to wrap my presents! Several sourced from fairtrade and charity shop, my Mum was most pleased with her Portmerion Botanical garden large biscuit barrel found in a charity shop for £10 and the two mint condition WW1 books for her husband!x

It all sounds lovely, and as Christmas should be - drawing family close whilst thinking beyond ourselves.
I think the rucksacks are a great idea!
x

Hi Floss- love the capon tales! I will ask around teenagers of my acquaintance. I'm sure we'll find someone amiable and articulate! Worst case scenario is that they'll have to correspond with a middle-aged woman who knows nothing but Lego and madness...

Hello Floss
Thank you for visiting.
I love hearing about your Christmas. You have really thought about every aspect and that makes it so much more meaningful doesn't it?
I like the charity idea of giving a backpack full of things to homeless people. I've never heard of that. Homeless charities are my top ones for giving. I just cannot imagine how hard it is, not having a home and living on the streets. Home is central to my life. As it is with all of us bloggers, isn't it?
Sorry to go on!
Wishing you and your family a happy new year filled with peace and kindness .
Josie x

Your Christmas sounds lovely and a very healthy balance of generosity, joy and frugality. I've replied to your comment on my most recent blessings post but just in case you don't go back to look - I send very best wishes to your son for what the New Year holds and will be thinking of him (and you because these things are anxious-making for parents too) E x

I love the thoughtfulness you instill in your gift giving.
Helenx

Well done for all your thriftiness. I always seem to have a lot of wrapping paper left after Christmas and still buy more for the next one so I was feeling very pleased with myself for just buying one roll this year. However, by the time I got around to wrapping presents on Christmas Eve I discovered that my new roll had been used, along with most of the other part rolls and I actually used everything up and only just had enough by measuring carefully! At least there is not a surplus to store this year!