A Pause in Advent - Essence - Others

Welcome to the second Pause in Advent! The posts from last week were diverse and fascinating, but also had some kind of unity amongst them - we often find that we are dwelling on the same ideas as we prepare for Christmas. Thanks for all your posts and to all who took time to read and comment on others' posts, which is so encouraging and interesting. 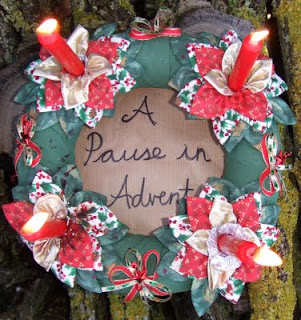 This year, as I've said, I'm thinking about the essence of Christmas - not the commercialised/generally accepted form of the festival ('flavouring'), but what it really boils down to ('essence'). This is very necessary, as I've taken on a lot more work, and also because no one now has the money to spend on Christmas that many took for granted a decade ago.

My first ingredient of the true 'essence' of Christmas was tradition. My second is 'other people'. It's generally suggested that the more you care about other people, the happier you feel. Focussing on addressing your own (and your family's) immediated needs, exclusively, is a self-defeating strategy - people who take time to help others are happier and feel more satisfied. There've been times when I've been pretty active on 'saving the world', but these last few years have been more about the family and me - I really don't want to get so insular that I forget there are others out there with far greater needs than our own. Dormouse has some great examples of how people are helping out around the world on her recent post here. Ben spends some time each year collecting food for the French Restos du Coeur (Restaurants of the Heart) - he was at a local supermarket charming old ladies (I don't doubt) today, for the big collection before Christmas. 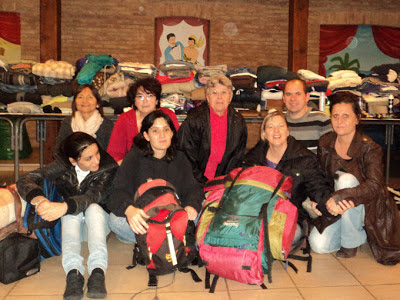 A group of people in a town near us has got involved in the Sakado project (there is a great French pun there if you know where to find it...). Sakado is a national organisation which organises the collection of packed rucksacks (sacs à dos) for homeless people. The idea is that you use new or good quality second hand material to provide warm clothes/blankets, hygiene products, communications aids (like a phone card or envelopes with stamps on) and Christmas goodies, and pack these into a rucksack along with your own personal message of encouragement. The rucksacks are then given to homeless people in the area - Toulouse in our case.

I've picked up two adequate rucksacks and a few warm clothes from our budget sports store - for some reason, the charity shops aren't stocking rucksacks at the moment, which I think is missing a trick. I've been to the charity shop for gloves, hats, socks, blankets etc so now it's over to the boys - I'm going to give them the list of hygiene products and Christmas goodies and a budget, and send them off to Intermarché to choose whatever they think would be best for a homeless man. Son 2 is already intrigued, and wonders if he will ever see a man in Toulouse carrying HIS rucksack! 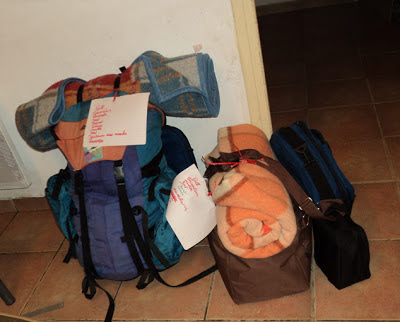 This is quite a costly exercise. Stocking up for it has already made me realise how absolutely impossible it would be to get properly kitted-out for outdoor life without an income. I hope that when the boys go shopping for the supermarket products they will also face some realities about how homeless people have to live. By getting involved, in this practical way, I pray that we are going to bless someone else this Christmas but will also count our own blessings more accurately. Maybe the essence of Christmas is that Jesus came to a difficult place, at a difficult time, among difficult people - for Others.
Posted by Floss at 11:16 AM

What a wonderful idea..have not heard of it over here. But will check that out. Our church gathers supplies for the homeless in the way of hygiene products and pits them in zip lock bags, but the idea of a rucksack makes more sense because you could stuff it with a blanket, etc.

Our church has one week every quarter where we feed homeless men and give out the zip locks but this idea is one that would go farther.

Having your boys be involved is a lesson they will never forget. Hope they get lots of bargains and feel good about it, too.

How wonderful! And great that you've involved all the family!
I love your last paragraphs- yes- it is a costly exercise- one we don't realise until we try it! Jesus did pick a very difficult time but it was the right time!x

Such a good reminder, Floss! And the concept of the rucksack, with all those necessary items -- that's great! I know the recipients will greatly appreciate that love. I wrote something rather connected to this, over at my "Pause" -- about not just looking inward for our peace. Thanks for this great blog theme.

What a lovely idea, Floss. And such a great example. I have participated in Samaritan's Purse's annual Operation Christmas Child with my kids years ago and now with my grandkids. Each year, we fill shoeboxes with toys and small toiletries and take them to the collection center to be sent overseas to children who would otherwise get little or nothing for Christmas. It's truly a joy-filled time for us and, prayerfully, a sweet blessing to those who receive them - as well as being a good example of giving for my grandchildren. Sweet Advent joys! Have a blessed week.

writing my post this afternoon we thought of youand the Pause in Advent meme which I took part in a couple of years ago. If I'm not too late I would like to join in again this year if possible.
I'm going to check out if there is a Sakado organisation here in Normandy, it's a wonderful way of helping someone in need and although we do give to the charities that collect at LeClerc it would be good to be able to personalise a rucksack for a homeless person. Many thanks for the heads up.

Wonderful - what a great project to be involved in. There is an inititive in our town with three churches jointly offering overnight stays for the homeless over the christmas week with hot food and somewhere to sleep. In my younger days I was once homeless for a silly 2 weeks and had a taste of what it could be like - I can't imagine how people manage long term and in the winter. Betty

I don't remember hearing of that group, but it sounds like a good idea.
We help with stocking our church Foodbank, all food is desperately needed by all sorts of different people, who otherwise would have very little.

What a brilliant idea. What lessons in the sacs a dos. I pray your love and conern will warm hearts and souls this winter.

What a fab idea! I love it when communities find genuinely helpful practical ways to serve those in need. I bet those bags have a story to tell!

Interestingly, just like you saw themes in last week's PfA collection, mine has a similar(ish) theme to yours this week too...

That is a wonderful idea! We have many ways of helping the homeless here but the rucksack idea sounds really great! How nice to have the whole family involved.

My post seems rather selfish compared to this. Just shared a day of pause with family and friends enjoying the simple sights and sounds of the season.

What a great way of giving practically to those in need. Like others we have done shoeboxes and the church also runs a food and care package scheme, we either donate money towards it or put items in a box each week and then they are bagged up and given out through local groups such as women's aid.

I've put a reminder on my calendar to follow this up next year with church (if I'm going!!!) There are collection points in Clermont so it's not too far. Thank you for the pointer

What a good idea, I wish we could all really help people every Christmas in this kind of way

This is such a good idea, and lovely that the whole family is involved. I think that it is important to be able to spread love around especially at Christmas time and I am sure the homeless people must be extremely grateful, not only for the actual items but also that people care enough to do this for them.

This is a great idea and I love the giving in kind element which somehow connects giver to recipient, even unknown recipient, more intimately. Well done you and you boys! E x