There are two posts I want to write this week, so this is the first of two Advent Pauses! It's the personal one - tomorrow I will post my final one, thanking all you lovely bloggers who've taken part in our little bit of peace in the midst of the preparations. 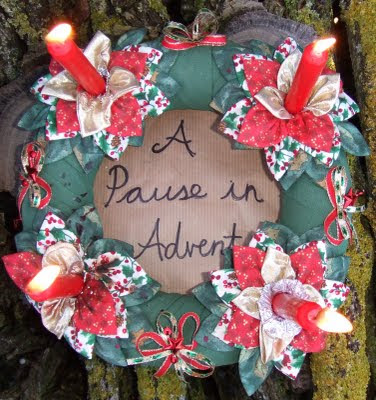 What I want to write about is gratitude for the past year, and trust for the year to come. When I looked in my prayer journal to see what was on my mind this time last year, I recalled that we had been terribly worried, as a family, about poor little Son 2, who had started College, the French secondary school, at the age of only 10. This is perfectly possible, given the way that the French school ages are organised, but by Christmas last year it was clear that he wasn't coping. His classmates were a particularly big, grouchy and underachieving bunch, and he was a terrified little learner, with a big fear of failure, amongst them. He was frequently in floods of tears over unfinished homework, and had difficulty sleeping.
j
We've known how our prayers were answered - the College reluctantly agreed this summer that Son 2 could redoubler, or take the year again, and we can see (and constantly remark on) how much happier he is this year, amongst children nearer his age and with aspirations more similar to his own. But to see our fears recorded in writing, and to think back over how things came together to this happy resolution, really makes me feel confident in the grace of God to see us through this next year, too.
j
This year poor old Son 1 is having the problems! (It's good of them to spread it out for us like this, I have to say...) He has coordination difficulties, a kind of dyspraxia, and because he's bright he always seems to get on OK, just with rubbish handwriting. But handwriting is such a key thing in the rigid French education system - all lessons are copied down from the board and re-learnt from your own writing - that as he gets higher up the system the tension of trying to finish lessons under physical stress (and then being told to try harder...) has really taken its toll. He has experts coming out of his ears - psychomotriciens, psychologists etc, all pointing out the physical difficulties he faces and asking the school to give him a break by providing photocopies of the lessons. So far, no go, but we think that his form teacher is now on-side and should get this organised for next term. But the stress of Raja's illness, his grandmother's death, and all this, have led to physical manifestations of the anxiety he's been suffering - recently he's developed trichotillomania, which is pulling out your hair. It's well under control now and he can add a psychiatrist to his list of experts (boy, did she write a chilly letter to his school...). But you can see why it has been very valuable to look back to our worries last year, and their resolution.
j
This is not a Christmassy song, but I can't think of a better way to end my post:


j
THIS, this is the God we adore,
Our faithful, unchangeable Friend;
Whose love is as great as his power,
And neither knows measure nor end.
'Tis Jesus, the First and the Last,
Whose Spirit shall guide us safe home;
We'll praise him for all that is past,
And trust him for all that's to come.
Posted by Floss at 4:00 AM

This year has been quite a trial for you, more than most of us knew. It is amazing how Our Lord can help us get through things that we can not see a clear end to, He is ever faithful and good. I could not have come to grips with the diagnosis of my sisters breast cancer, last spring, had it not been for my faith.

Thank you for sharing with us and I will continue to keep your family in prayer.

Dear Floss, you have had so much to deal with this year I sincerely wish you a much happier year ahead. My 12 year old is going through agonies at school as he has aspergers, tourets and adhd all rolled into one little personality and is currently hormonal with hair sprouting everywhere and a deep voice and still a little lad inside. We tried but failed to get him a statement of special needs but he so desperately needs help that our school system can't provide so I do identify with you as a mum who has to fight to get what's right for their child. I would like to say my faith is strong but I do falter and doubt often.

What a tough year you have all had, the boys have really struggled haven't they? I really admire the strength you have and how you have coped through it all. I do hope things will be better with the boys school next year. What a shame they won't/can't provide DS1 with a word processor to use, or as you say simply provide photocopies of the lessons.

Your prayer journal sounds like a valuable resource and such a great way of looking back at the year and seeing how worries have been resolved.

{{hugs}} to you all and thank you for this post Floss.

I can well understand how the French system might be for your sons if their attitude to other things is anything to go by - so rigid and exact and nothing short of perfect is acceptable. It must be very hard but I am glad that your prayers were answered over the past year and hope that you boys will both come out of all this stronger people - with you as their mum I am sure they will! My french friend tells me that they have a saying that being a maman is never easy just as we do.

Oh, I hope everything will be OK for your son next term... sometimes you really have to try and try and insist (some teachers still think that it's not up to them to make things easier for the students) and keep communicating with the administration and the teachers. Good luck !
As for the hair-pulling, both my daughters did that... Elise had a "hole" at the back of her head, a bare patch where it's slowly growing back and Laure quit pulling, but still twists her hair around her fingers - and sometimes it gets so tangled that we have to cut the whole thing !
Well, you will all be in my thoughts and prayers for next year, and I wish you all a Merry Christmas !

This is a lot to deal with. I will pray that the next year will be an easier one for you and your family.

What a hard year you have had, Floss. I hope and pray that things are easier in this next year.

I do hope things get better for your son. It is good to look back and see that things do work out in the end.

I love the idea of a journal of that kind, its nice to see how things were answered.
x

Dearest Floss - so good to hear how prayers have been answered through a very difficult year. [I love that hymn too, and often hum it to myself]
God bless you all over this Christmastide with much joy and laughter x

I hope that you manage to get the right support for Son 2, although I dont doubt it as you are a super advocate for your children and a great mum.

I think it's the perfect post for this Advent and Christmas season. We, too, have had so many trials this year - spread out among my extended family. But through it all, I see God's hand protecting us in so many small and large ways. A wonderful reminder of the joy of the first Christmas time - when Mary and Joseph experienced so many trials through their first few years - yet God's hand was evident throughout it all then as well as now. Praying for you for continued comfort and encouragement. And thank you for another delightful Advent Season together! :) It's been such a blessing!

Thank you for posting this. I know that it has been a difficult year (so many families have been through such trials lately). Sharing this will certainly give courage to those with similar issues. It can be so hard to watch our children struggle and we want their happiness and well being above all. Hopefully the school system will soften a bit. We are so fortunate to have a school that is very understanding.

Know that your love and care makes all the difference! Much love to you too!