Oh, I loved your comments on my first mince pie post! Lululiz rightly pointed out: "Hahahaha, those are the best competitions, where you get to scoff lots of lovely things, and in the end it doesn't really matter who wins, because you are all too stuffed to care, lol." 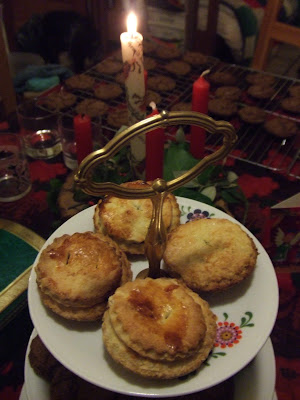 Heidi of Bord and Butik asked "This may sound silly but I have never tried this pie. I always thought it sounded .....are there prunes in it?" Perfectly good question, Heidi - you've taught me a lot about food, so now I hope I can teach you a bit about British Christmas food! I'll begin with another email from a non-Brit (and you can tell...)

Green Thumb said: "Ha ha! it sounds like a competition for who's getting fatter!" But yes, my Italian friend, the British Christmas IS a competition to see who can get the fattest! Any Brits out there who disagree? Living in France has shown me that good food doesn't necessarily mean excessive food, but that came as a bit of a shock to a Brit! 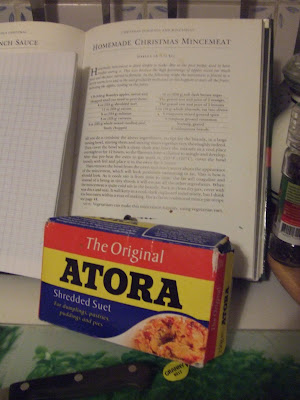 So now, to business. Mincemeat used to contain meat, in the Middle Ages, but now only the dried fruits, fat, apple, nuts, sugar and alcohol are left. Those are your basic ingredients - usually dried grapes in all their various forms, and citrus peel. No prunes, actually. Suet can be vegetarian, so you're safe if you don't fancy the traditional beef fat. 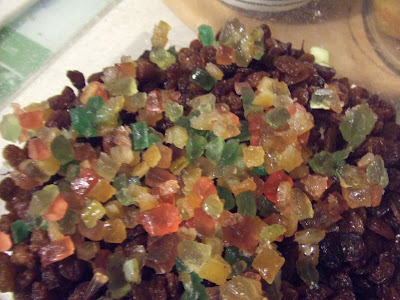 The pastry is very important. This is where I feel the Hairy Bikers' recipe really falls down. Theirs sounds good, with a lot of orange peel and orange juice in the mixture, but the pastry comes out of the blender like modelling clay and cooks similarly. Did you find that, Maggie? I tried it by hand and it was no better. 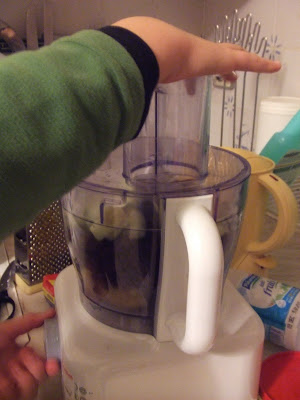 Therefore, my pies, with the sweetened, enriched pastry recipe from Ben's 1990 Good Housekeeping recipe book, came out the winner. My mincemeat, à la Delia, also wins for the most traditional yumminess. (Delia is Martha without the home decor, for my American friends.) But we did like the HB's smoother, more citrussy mincemeat too, and I've put some of that into my own pastry cases, and we are looking forward to that tonight!

Perhaps the best result: Son 2, who is Picky Eater Number 1, decided to try his brother's mincepies because he was starving (nothing else would have motivated him) and he has finally decided he LOVES mince pies! Since then he as also tried mashed potato with pumpkin, which even his brother won't eat! So we have a more relaxed eater, willing try occasionally try a few new things. RESULT indeed!

Oh I remember the discussion about the suet last year! It still looks yuck to me!! I bet the pies were truly yummy. And you are meant to get fatter at Christmas, it's the rule.

I am ashamed to say I haven't got round to making my mince pies but that will be for tomorrow. Meanwhile I have a wonderful pastry recipe I managed to prise from a friend many years ago and it just melts in your mouth. I only ever use it for mince pies and they really melt in your mouth. Mmmh maybe I will share it one day . . . .

I am being brave now and admitting I DO NOT LIKE MINCE PIES OR CHRISTMAS CAKE.
For the first 27yrs of my life in Britain, I ate mince pies and Christmas cake along with every other Brit. I came to Canada then realised that I do not like it, or mince pies, or traditional Christmas pudding. I make a version of Christmas pud but it is much lighter in taste and colour.
Jane x
PS (whispers) I do not drink tea either.

still undecided what do you think of fruit cake the candied kind?

Funnily enough I have had some shop bought ones today (I won't mention where I got them from!) and they were the most tasteless things I've ever eaten. A true motivation to make my own next year methinks!

Well sound like the best results all round :-) Glad you all enjoyed yourselves eating the pies.

I made 30 today but had to freeze half so my greedy children don't scoff them all at once!