I had a rather crazy afternoon today - something I saw in the charity shop last Thursday had been preying on my mind... 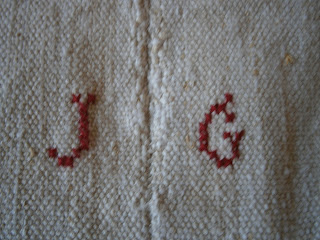 ﻿
﻿
Huge antique sheets made of hemp, I rather think, although they have a really chill feel so I suppose they could be very coarse linen. Both have these initials on them. 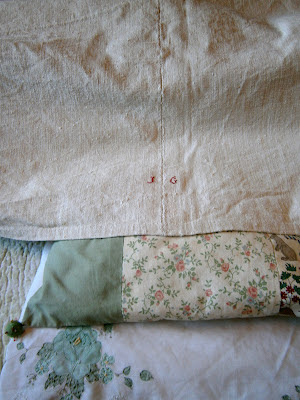 Both are completely hand-stitched - down the middle (because the fabric was woven on a narrow loom) and also on the hems where there isn't a selvedge. 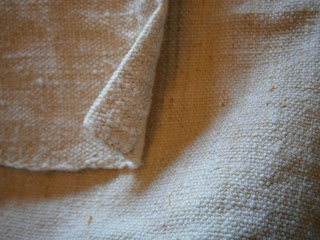 I really admired them, but wondered what on earth I would do with them - they are a bit rough, and each one weighs nearly 3kg (try weighing the average sheet - I guess it would be under 1kg)! 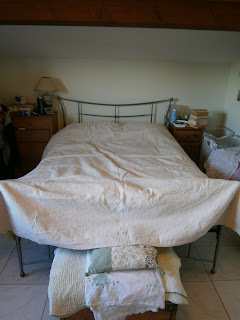 Then at some point yesterday I had a flash of genius - my very own Sofa that Mocks Me! The sofa that is just too long for any throw, bedspread etc... but not too long for these enormous antique sheets! So I have to get experimenting once we get back from holiday, but I think these fantastic, all natural, very strong sheets will make some suitably huge and sturdy covers for the sofa, which will then have some rather softer crochet throws over the top.

I then went and spent Real Money on New Stuff, which almost never happens. I bought a camera to replace the lost one, as we're off on holiday soon and Ben isn't prepared to have a last-minute 'we don't have a camera' panic! Sensible man. And I also bought a laptop computer for work. It's the sales ('Les Soldes')! Scary but satisfying...﻿

Hooray! You've got the essentials for photo journalers: camera and laptop!
I am fascinated by the sheets, too! I wonder how old they are.
Are the Willows there yet? I think maybe Mr. Dormouse is waiting for Mrs. Dormouse to get home and that's fine. I've been thinking of them and have considered making a Mr. Badger so he can anticipate their return to Denver. Such fun!

I do like the sound of all these developments. Hemp/linen solving a dilemma. Best wishes for a pleasant holiday. Wonderful to have new camera to take along, and a computer that will do what is asked of it.

Hurrah for a new camera - you just know that the old one will turn up now don't you ;)

Have a good holiday xx

Interesting idea for the sheets. I'll be watching to see those sofa covers materialize. Looks like a very big job. Have fun on vacation.

Interesting that the sheets were so large. Wonder what they were used for (except sheets?) Great find.

Those will make fab sofa covers and will look especially lovely with a crocheted cover.Well done on your retail therapy too. Well-deserved I should imagine.

Are you ok, Floss? or maybe you're on holiday now. Either way, hope you're well.

Welcome home! I've been away too, not far, but away from the computer for a much needed break.

I love those sheets, beautiful! I've thought of purchasing on-line, but my budget wont budge on those. I think it will look fab on your couch! How exciting.

I have been thinking I should do a sort of retrospective on "The Couch that Mocks Me" soon. Drum up all my past photos as homage :)

Have a lovely rest of your week!
xo