A week away from blogging - and those tins!

Thanks for your encouraging comments about my new blog header and background, and also about my blogging break. I don't know if you ever find that you feel a bit out-of-sorts, and that the internet is becoming a prop which attempts (and fails) to improve how you feel? When I get like that, I know it's time for a week's break. Here is the story of this last week: 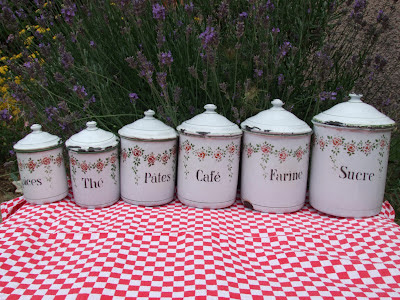 Shortly after I signed off, Son 1 and I decided to pop into the Troc Shop on our way past. They are usually pretty short of vintage stuff, normally veering between useful modern stuff, modern tat and antiques, so I was stunned to see this wonderful set of canisters there for 25€. 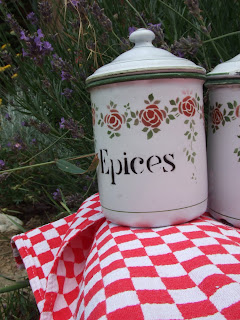 Far more than I would usually pay to add to my collection, but far more beautiful (and also more complete) than anything else I own. I was given 25€ for my birthday, so the canisters are now mine, and have inspired my first ever change of blog design, too! 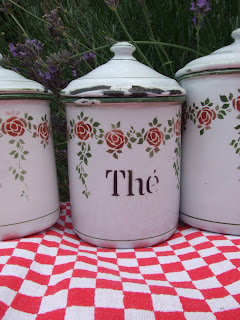 On Saturday night we had an unexpected gift – the boys were invited to sleep over with a friend, so I booked (by executive decision) a table at the best restaurant in our town. As Ben loves good food and I usually book cheaper places, I knew this would be well received! 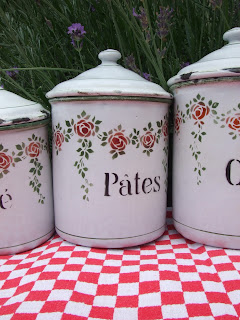 He and I spent the afternoon doing coupley-type things, choosing new glasses for him, buying some kit for our forthcoming camping trip, and trying on, but failing to buy, sandals. We dashed back from the optician’s to get changed and walked out, through the Coulée Verte, to the restaurant. Having been warned there was a wedding party I was anxious that we might not get a seat outside, in the old open barn, but the wedding party had checked the forecast and decided to go indoors! Ben and I therefore celebrated both my birthday (late) and our 22nd wedding anniversary (early) by eating a fantastic meal, drinking velvety wine, and not getting wet despite the flash thunder-storm. The wedding party was small and very sweet – an older man (very dashing) was marrying a woman a little younger (extremely tasteful lace dress) and their children and a few grandchildren made up the party. Other diners included one of Ben’s bosses! 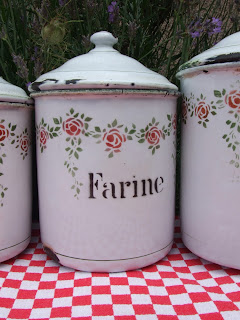 After we’d finished our leisurely meal we strolled back through the town, as the Coulée Verte was too wet underfoot for a return journey in decent shoes. This gave us the opportunity of passing through the town’s youth music festival, which was actually well-attended by adults too. We spent most of our time (in the light rain) looking at le train d’enfer, a wonderfully old-fashioned fairground side-attraction, the aim being to push the skeletal train model up a steep track into the flaming mouth of hell… This and a few other old-French-style attractions were presented by exquisite young adults in black and white stripes, berets, skull carnival masks and other stunningly stylish accoutrements. Their every move was like something from a silent film, and the overall presentation was so different to a modern fairground. One game was a variation on what the Brits call ‘Bash the Rat’, but this time, children had to stab a speeding saucisse with a fork as it came down the tube! We watched one child win his saucisse, and then decided to head for home. 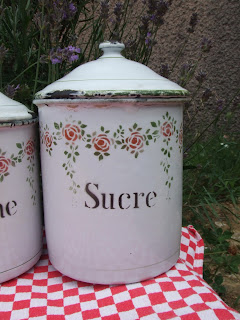 Sunday was quite a different day, with Ben heading off to the Netherlands with the aforementioned boss, and the boys coming home rather on the tired and ratty side… I did pop out to the weekly Vide Grenier that calls itself a Marché de Puces, and came home with some lovely bargains – usually, prices are quite steep there, but everyone seemed to be clearing out granny’s attic this week! I’ll post pictures when I’ve taken them… but immediately after coming home, I lost the camera! I know I only put it down briefly, but can we find it...?
Posted by Floss at 9:11 PM

You so deserved this amazing thrift score.....my goodness these are so amazing!!! This is one for the history books...

I hope the camera finds its way back to you, Floss!

Yay on finding a blogger background to your liking -- there are too many to choose from, so I've always kept mine plain and simple, which really is to my liking :D

Your new find and header are lovely. Happy birthday and anniversary! Betty

Your cannisters are just gorgeous - just goes to show there are still treasures to be found. Belated Happy Birthday and Anniversary! M x