This week is all about Son 1's work experience - I seem to be contstantly shuttling him into and out of Toulouse - but it's well worth it, given how much he's loving learning about the archaeology of Toulouse at the Antiquities Museum. When not working, I've decided to make the most of having to go into the centre of the city (I usually skirt it for my teaching tasks). Yesterday I wasn't working in the morning so I went to the Fine Art Museum to see an exhibition that had caught my eye when it was first advertised: 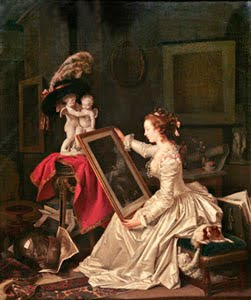 It's an exhibition of the small, intimate paintings of individuals, families and rural scenes which became popular shortly before the French Revolution. Instead of showing powerful people or religious stories on huge canvasses, the Dutch fashion for painting real, ordinary people, spread to France and was beautifully interpreted in both pre- and post-Revolutionary France. Rich people paid to be painted and poor people also became subjects for the artists - clothes and skin were depicted in incredible detail, and background details were surprisingly sketchy. The silks and ribbons of the aristocracy and the cottons and muslins of the Revolution and Empire periods were wonderful! The exhibition was all I hoped for and more, and it was a wonderful way to make use of my trips into Toulouse.

Tomorrow... the museum and one of the big churches, followed by lunch with Son 1!

lovely blog you have here ;0) i really like the post about re-loving what you already have- great idea!!x