Happy New Year, friends! Thanks for all your seasonal wishes and your excellent blog posts, which I'm slowly enjoying between unpacking, housework, homework, boy-minding etc (there are the usual five boys here at the moment, although they can mainly mind themselves).

I wanted to do a now-traditional review of the past year, and spent some time pondering the most appropriate set of photos to accompany the post. I finally fixed on seasonal food, one photo for each month - harvesting, cooking and eating being such a good way to mark the seasons, and thrifty and environmentally friendly, too. The photos all came from my blog, so I was limited by what I'd posted about - some months I hardly photographed food at all. But, rest assured, we ate... 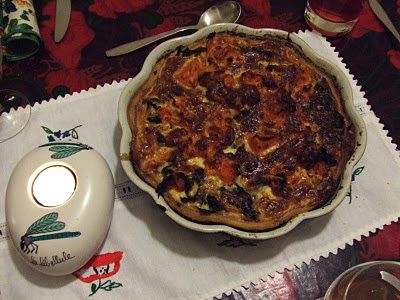 So, in January 2011, various members of the family went skiing and cooked a hot meal in the snowy Pyrenees. In blogging we enjoyed the excellent Wind in the Willows week, which has created its own follow-up event in the form of a touring book, which I believe will make its way to France at some point in 2012! I also asked the question, "What is Modern Vintage?" and you came up with some good answers. The food photo of the month is this Roasted Pumpkin and "Wild" Mushroom tart. The pumpkins are in the kitchen again, slowly being eaten up - it's a good thing I searched the photos and was reminded of this recipe! 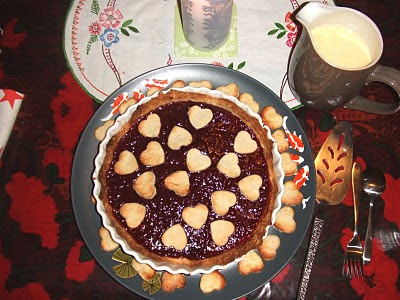 In February I over-did the jam in this Valentine's Day tart. Sticky and sweeeeeeeeet! Other than that, we had a big blogging conversation about the use of handkerchiefs. I love 'em. I sold quite a few of them in my blog shop this year, too. 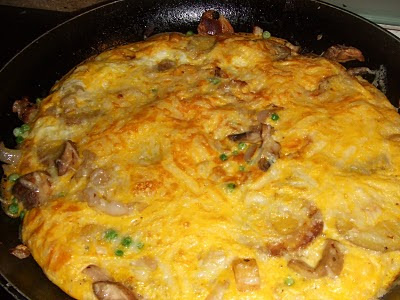 In March my friend's chickens started laying again and I had to 'help out' by taking some eggs off her hands. It's a hard life... It was also the town floral fair and we surround the outside of the house with 10€ worth of pansies, which lasted well into the summer. In a Vide Grenier I bought some initialled ribbon, which has since travelled as far as Australia in a swap! 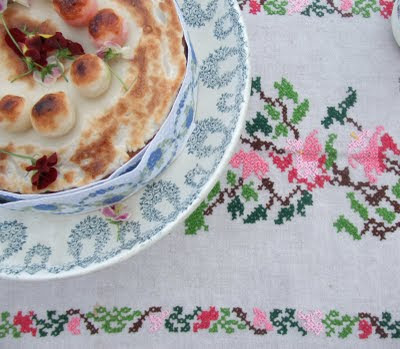 April was the first month when I started photographing food out of doors, although we were actually eating the occasional meal outside from February onwards. This is our Easter Simnel Cake, decorated with some of the famous pansies! In the run-up to Easter we had our annual Pause in Lent, I had fun joining in the swap and posts for Thrifty Week, and I posted some prayers for our children which are still quite important for me. 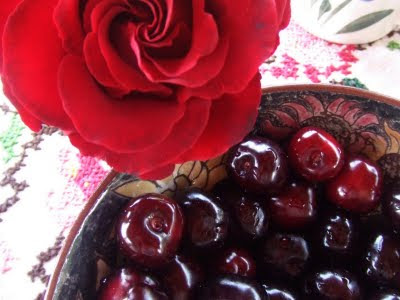 The cherries ripened on our friends' tree in May. In the relevant post I said that we'd eaten cherries with every meal one day - it's great to read back over the posts because one forgets stuff like that. Our own tree is tiny and we're lucky to get one cherry a year off it at the moment. Paience... 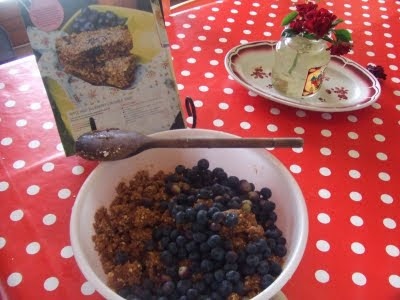 June was a really busy, mainly exciting month. I met up with some lovely bloggers in London, which was such a great opportunity to spend time and chat - well worth doing again! I picked blueberries from the local farm, cooked loads and froze more. I will be back there in 2012! The downside of the month was Son 1's operation on his knee - it's good to have great healthcare here in France but even so, an operation is nasty. He's due for a second one (the other knee, a related problem...) at the end of January 2012. Whilst recuperating, Son 1 celebrated his 14th birthday and spent some time reading his Hairy Bikers' cookbooks. When he was up on his feet again he introduced us to Courgette and Feta Fritters. Possibly the best recipe we discovered this year? And we usually have enough courgettes in the garden to do this. Other than harvesting and eating garden produce, July was a productive time for Brocante shopping for me - I found a closing-down sale! I bought a fair bit of china, including the red-stencilled plates in the photo. They've been in constant use ever since. 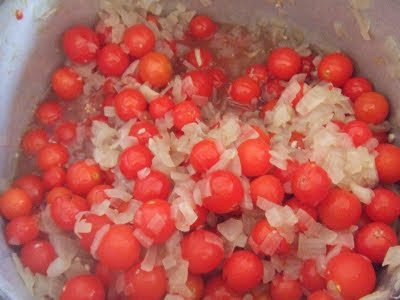 By August the garden was producing so well that we were looking for recipes to deal with gluts. This Cherry Tomato Chutney was a good new addition to our repertoire! We had both a Staycation and a Gite holiday (the latter with Ben's parents) in August and it was a very special month. 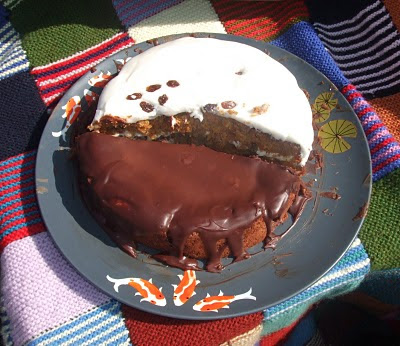 Ben's birthday towards the end of September prompted the boys to generous acts of cake-baking. Son 2 ALWAYS makes carrot cake and Son 1 decided to revisit Bruce Bogtrotter's Chocolate Cake, from his Roald Dahl Revolting Recipes book. It is NOT revolting. The Vide Greniers of the area were still going strong and I was still hauling in some lovely finds. I had to slow down on the spending, in fact... 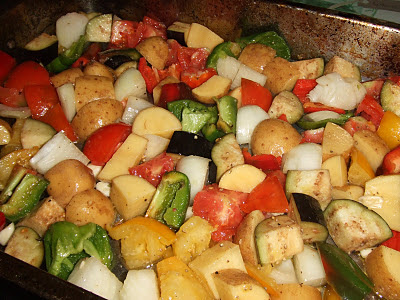 Finally, we were back to photographing and cooking food indoors in October, although we were sometimes still eating it outside. The garden peppers and aubergines were great this year, as were the chillis (now well-distributed around our relatives in smoked, dried and jellied form). Happily, given my lack of disposable income, I mooted the idea of 'The Thrill of what you Already Have' and you seemed interested - more to follow on that for a 2012 monthlyblogging project. 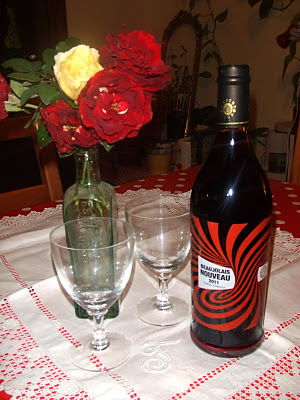 In France there is a seasonal wine for November, as well as specific foods. We head to the local supermarket and buy whichever Beaujolais Nouveau they are favouring - you can rely on them to choose a decent one and sell it at a reasonable price. We were not disappointed this year! In blogging, our Pause in Advent began. It's really good to join with blogging friends and see their different 'takes' on the run-up to Christmas, and to also see how themes emerge despite our different approaches. 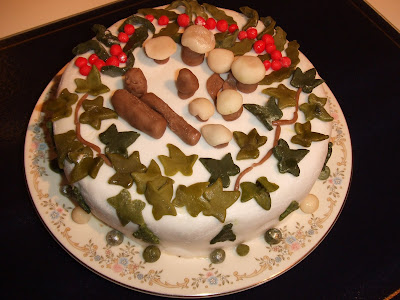 Finally, in December we threw ourselves into Christmas with just about the right balance of work (mainly on homemade gifts and food) and relaxation ("Christmas Machine, what Christmas Machine?"). We spent time with the majority of our relatives in England and Scotland and offloaded the preserved contents of our garden onto each of them. We were home for the New Year and feasted on cèpes (wild mushrooms) bottled for us by our neighbour this autumn. We are looking forward to another year of thrift in food-shopping, productivity in the garden and sharing excess produce - I think you and we are all getting the hang of this enforced thrift, don't you? It's not actually a hardship, when you see how we've feasted. I hope you're able to feel the same.

And I know I quoted it last year, but surely there is no better verse for the turn of the year than this one:

"This, this is the God we adore!
Our faithful unchangeable Friend.
We'll praise Him for all that is past,
And trust Him for all that's to come!"
Posted by Floss at 4:42 PM

Oh that post is making me feel hungry - not that I need anything to eat!

Thank you for the beautuful New Year's blessing.

I love your images of home cooked delicious food.

What a delicious selection of food from the past year, I look forward to following more of your cooking and brocante adventures in 2012. Jude x

What a great post! And now I am hungry and must go and find a snack....LOL I would love a taste of those two cakes for sure. Have a wonderful New Year! Kit

Happy New Year Floss. All the food looks beautiful, almost too good to eat but I'm sure I could force myself!
Carol xx

I love that hymn, you have actually quoted from both verses of it, but it is one my favourites and full of memories of New YEar as a child as it was one we always sang.
Has been great reading through your review of the year and I am so glad I discovered your blog this year.

I enjoyed this food journey, Floss.
What is this operation I hear about Son 1's knee?
(So sorry -- I have been overly out of touch!!!)
I like to hear and see how the boys all get up to involving themselves with cooking. Are you raising a couple of master chefs? :)

'The Thrill of what you Already Have' -- love that.

What a brilliant foodie review of the year

I love that hymn too - and the lines "His love is as great as His power, and knows neither measure nor end"

Hi Floss!
I enjoyed looking at your food photos! You created some beautiful dishes. I'm so happy that the second leg of the Grand Tour is about to begin!

Great post Floss! So many delicious meals, how fun to look over the year this way. Unpacking? I'm wondering what that is all about, I'll have to go back over your last posts and catch up on all your news. So lovely to hear from you, as always. Bye for now dear one xo