On my way to visit the Brocante on Tuesday, I found myself thinking about a little back road running between the village where our boys started French school and the town I was heading for. I wondered if it might be nicer to drive that way than to take a short hop along the motorway.
j
The decision was taken out of my hands when I discovered that the motorway sliproad was blocked for roadworks! Rather than taking the official diversion, of course I headed for my half-remembered little back road... 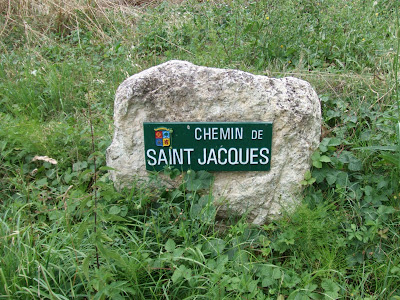 And it really was only half-remembered, because I had totally forgotten that it was part of the pilgrim road to Santiago de Compostela, part of which runs right across our area, north of the Pyrenees. 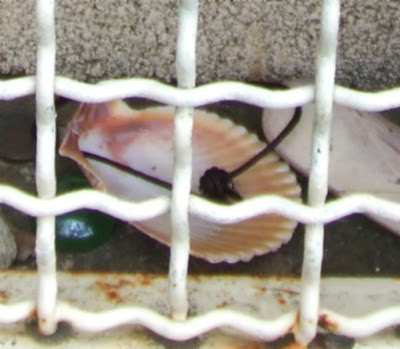 The scallop shell was worn by medieval pilgrims on this road. Wikipedia gives this explanation: "The scallop shell is the traditional emblem of James, son of Zebedee and is popular with pilgrims on the Way of St James to the apostle's shrine at Santiago de Compostela in Spain. Medieval Christians making the pilgrimage to his shrine often wore a scallop shell symbol on their hat or clothes. The pilgrim also carried a scallop shell with him, and would present himself at churches, castles, abbeys etc., where he could expect to be given as much sustenance as he could pick up with one scoop. Probably he would be given oats, barley, and perhaps beer or wine. Thus even the poorest household could give charity without being overburdened." 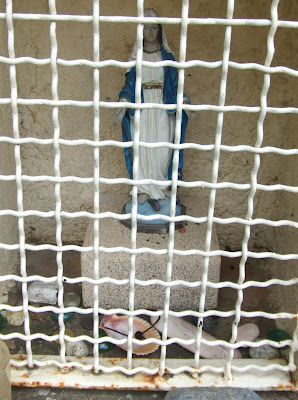 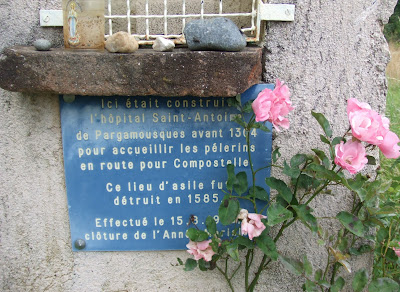 The sign told me that this little shrine had been set up at the site of a pilgrim hostel, built before 1304, and destroyed (why?) in 1585. 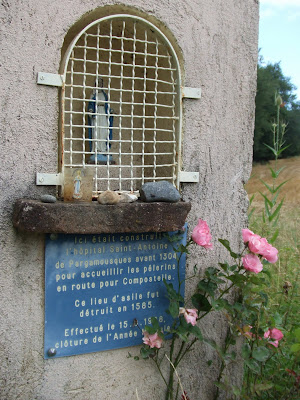 The whole thing was, of course, very Catholic, which I'm not. 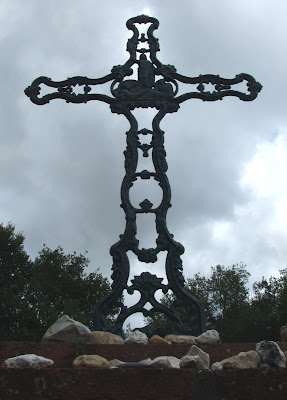 There was a time when I would have seen all this 'alien' imagery and material expressions of faith as evidence of un-Christian superstition. Sorry. 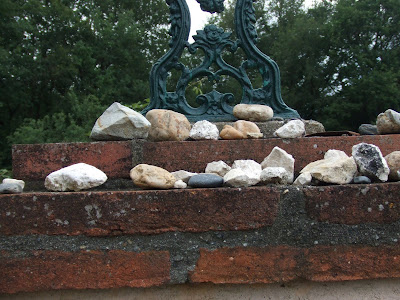 But God has taught me something about humility and diversity in worship, and history has taught me that medieval people who didn't have access to the written word of God could still find ways to praise Him, often with concrete actions and tangible expressions of belief. So on Tuesday I was happy to leave a pebble by the cross, adding my prayer of thanks and praise to the others.
Posted by Floss at 11:19 AM

Hi Floss! I love this! It reminds me of an old young adult novel I admired in middle school and actually READ last year, Mount Joy. I learned so much about pilgrims and pilgrimages. Thank you for the lovely photos.

A very touching post. Thank you for sharing the photos and especially, your special thoughts. xo

We are familiar with that route too as one of the routes to Santiago passes through Limnoges and is marked with brass scallop shells. We also came across a man walking the route last summer when with our French friends in the Creuse. It seems a pity our route to Canterbury isn't as well known or walked these days as it was in Chaucer's time!

"Humility and diversity in worship", how insightful, how wonderfully true. Reminds me of the Faber hymn "There's a wideness in God's mercy, like the wideness of the sea...."

That Mercy covers the prejudices of our immaturity
and is there to bring us joy in new discoveries as we travel on.

On one of my visits to France I visited the little village of Vezelay in Burgundy where there is a very old abbey church.
It too is on the pilgrims walk and has brass scallop shells set into the roadway up to the abbey.
I loved the feeling of walking on the same road as those wonderful believers of centuries past.

I am catholic from birth, so all the saintly images and such like are very familiar to me.
I'm always sad to see so few people attending church services today - it's the same in NZ as it is in France.

I agree with you - the global village is a melting pot of diverse cultures and beliefs and the more accepting and tolerant we can be of each others differences the closer we will be to world peace.

Have a wonderful new week!

how perfectly said....I as a child always thought the Mary statues were so pretty!

Dear Floss,
I loved this post, especially about embracing the diversity of practicing beliefs, its also intersesting to note that a lot of what was being used was natural in the forms of pepples & shells...

My favourite pilgrimage is to Santiago, I always feel that it was there for those who couldn't manage Rome or the Holy Land. It is a deeply spiritual place for people of all faiths, and none.
And of course whenever we eat scallops here in France, we have a reminder "Coquilles St. Jacques"

A lovely post. I read about the pilgrimage to S de C many years ago and Mr and I have promised ourselves that we will do it one day! M x

Lovely post! A reminder that God know the heart, and that our acts of worship, no matter how humble, give Him glory. Each of our pilgrimages, our journeys, lead us in different ways, its the truth of our walk with Him that He desires. Glad you left your pebble, made me smile, as I would have done the same thing.