Walking in an Ariege Valley

On the day of 14th July, the fête national, we set off from our campsite to drive into one of the valleys that lead up from Massat, the nearest town. We'd spent some time in the Tourist Office in Massat the previous day, looking up walks that didn't involve too much climbing, for Son 1 and his tendons. We found two walks that both started at the same point, and decided that we could do one in the morning, have lunch back near the car, and then do the second in the afternoon. This is the story of those walks! 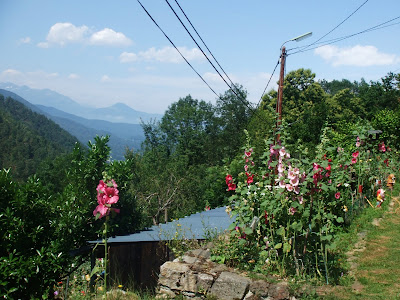 Our first surprise was that, having climbed a long way in the car, we were on a steep and inaccessible hillside which were filled with houses. What on earth were people doing so high up, both now and in the past? The climate was a clue, we supposed - look at the holyhocks there. In a hot, dry area, the Ariege valleys remain cooler and green all summer, meaning that they are very like an English country garden in terms of productivity.
j
Only vertical, instead of horizontal! 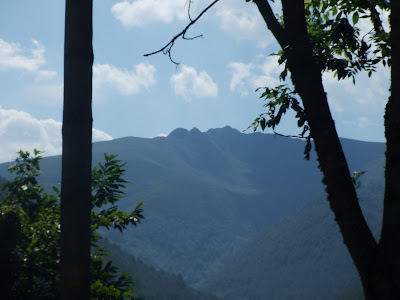 Old farm buildings popped up all around our steep tracks, and very few of them were ruined. Farming is still going on. I wondered how much it was being done by the families who'd farmed there for centuries, and how much was down to a new population who'd chosen alternative lifestyles. 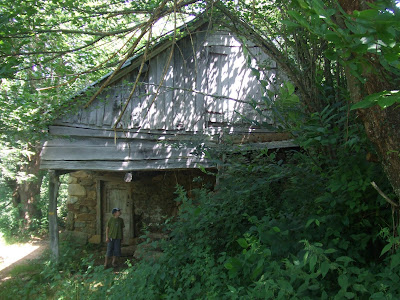 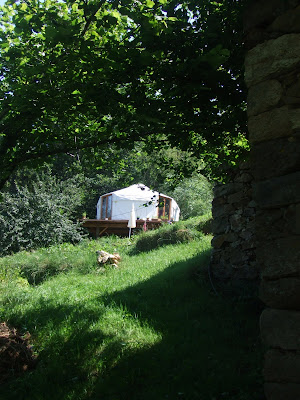 The yurt was built on a wooden platform (no land flat enough, no doubt) and had a thriving vegetable garden around it. Other old buildings had flags, banners and animal skulls around their gates - the alternative lifestyle theory was gaining ground. 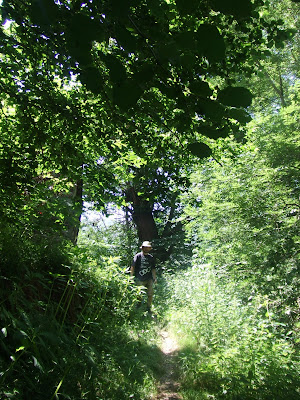 We went on through incredibly verdant hill paths, finding more ancient farm buildings still in use. 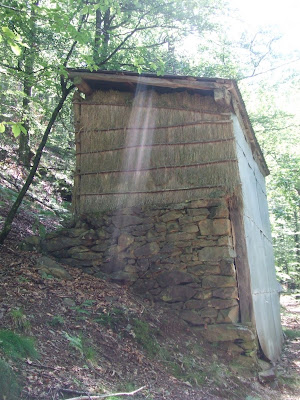 As we dropped in zig-zags along the side of the valley, we found ourselves walking along this ancient track, formed on a terrace cut into the hillside, and carpeted in thick drifts of oak leaves. 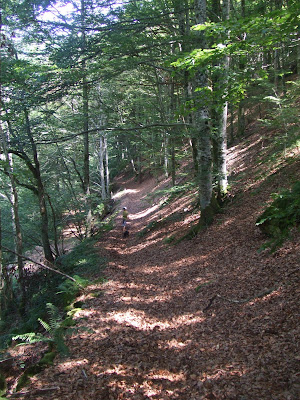 Reaching the bottom of this particular high valley, we walked for a long while along a wooded river. 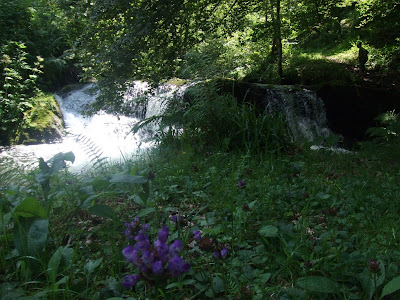 Here there were no signs of agriculture, 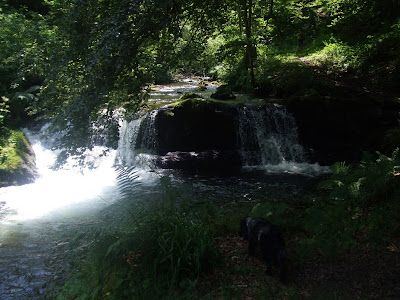 but plenty of well-made, rustic bridges for the trail. 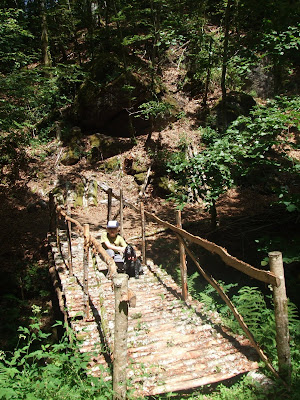 Son 2 was normally at the front - after one turn we found him holding his nose and pointing at this stinkhorn fungus. They smell of rotting meat, to attract flies. 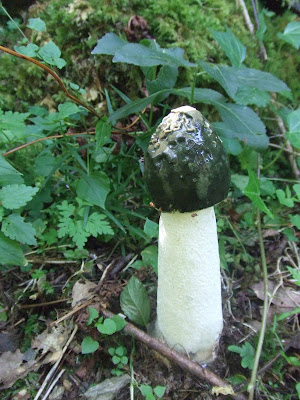 On we went, over more bridges. 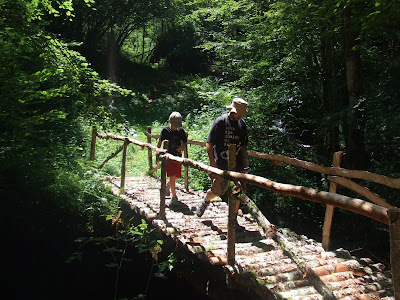 We were climbing very gently, following the river as it carved its way through the rocks. 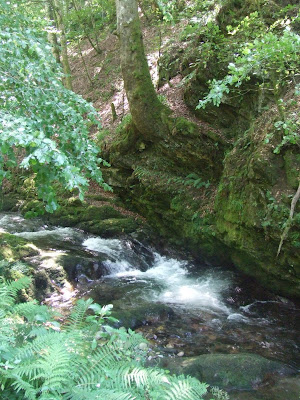 After a last burst of climbing to get us away from the river and back to the hillside church where we'd parked, 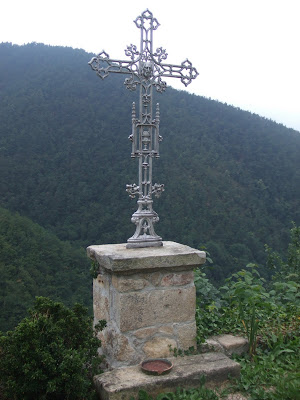 we stopped for lunch. 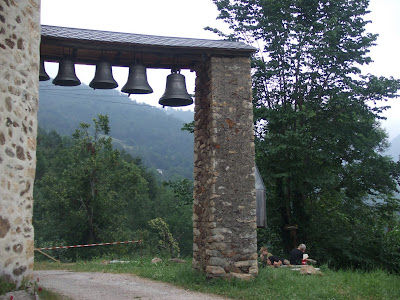 There was some reluctance amongst those under 40 to continue the walk after lunch. They'd got settled with their books! 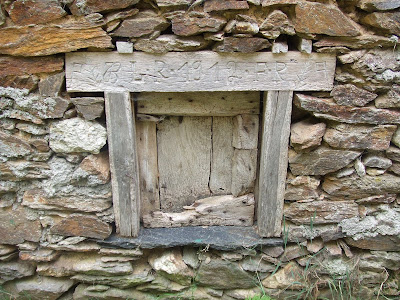 But this second walk took us through much more of the farmed landscape, staying, as it did, on the south-facing slope of the steep valley. We started off, through hamlets and farm settlements, along an old packhorse track - very easy walking, of course, built to bring produce out of the valley into Massat below. 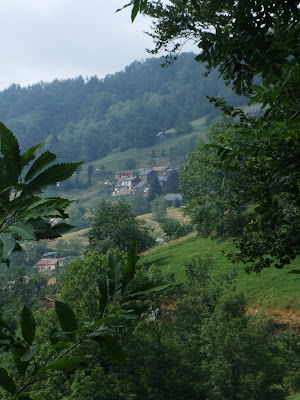 Although there were plenty of trees, we also noticed many more meadow flowers than in the morning. 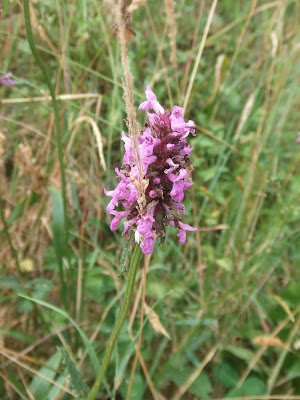 I had scabious in my wedding bouquet, and it remains a favourite! 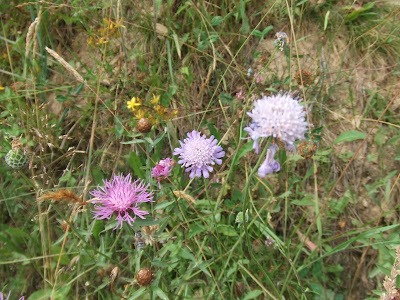 Leaving the packhorse track, we climbed (poor tendons) up to a higher terrace, where we followed more tracks, past more barns and houses, through more hilltop hamlets. 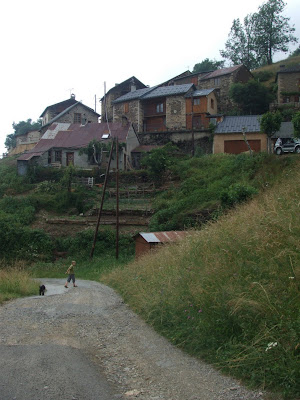 The track was more open now, and the sun had come out again, which made the climbing a bit of a struggle, but the little houses and, especially the flowers on the banks, 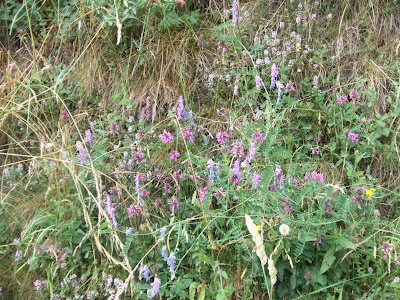 and in the steep meadows, 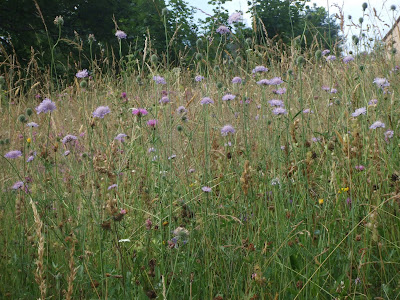 were an absolute delight. 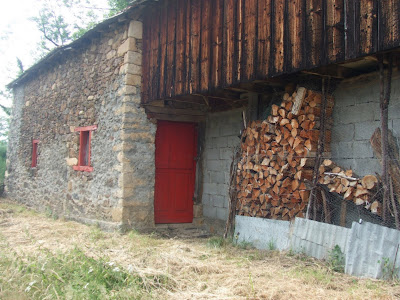 Our track took us rather further than we'd intended, and we ended up in the high hamlets, actually dropping steeply back down to the hillside church. 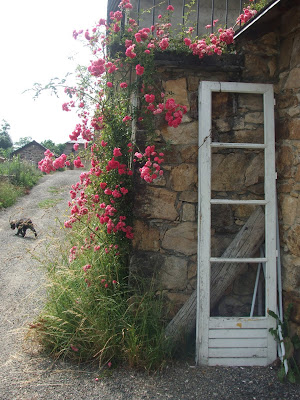 The two walks were a beautiful (although rather tiring) way to learn about the agricultural past and present of the Ariege valleys, and were a great way to prepare for the excitements that were to come at the Marché Nocturne in the market town of Massat, which still serves as a first point of sale for many of the artisans and farmers living in the wooded valleys beyond the town. So I'll tell you about that, tomorrow!
Posted by Floss at 10:00 AM

Thanks for the lovely walks - stunning scenery and lovely wild flowers. Looking forward to the night market tomorrow having been to a really good one in St Antonin Noble le Val and also nearer home in Rochechuart I know what fun they can be!

Oh how lovely!! A magical summery woodland walk to brighten up my dull wet Tuesday in Blighty. X

That is so great...I love the pictures with the hollyhocks. I'm jealous of your walks! Keep posting about them. :)

Thank you for taking us on such a beautiful and detailed walk (I did get a bit winded). The cross is amazing, is the church spectacular too? Looking forward to the next installment about the farmers.

Walking is one of my favourite things to do. And how delightful to "walk" with you via the internet on your day trip in France. Thanks for sharing.

Thankyou for sharing your walk with us. I almost felt like I was in France :)

sarah-jane down the lane said...

That stinkhorn fungus is my one new thing I have learnt today! It looks terribly sinister.
So enjoyed a French stroll with you,

Than you for taking me along with you and your family on your gorgeous holiday! Your campsite looks great :0) Did you hide a crochet hook away with you?
Val xx

I had scabious in my wedding bouquet too! This looks like a truly wonderful place Floss x