Baba Cool to Barbapapa - an alternative summer celebration in the Ariege

It's about 8.30pm and we've finished our walk in the green valley and had an aperitif back at the campsite - would you like to join us for the intruguing Marché Nocturne at Massat? 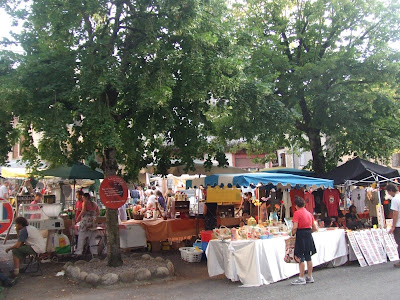 It starts off fairly normally - it's still light and the church clock stands at quarter to nine in the evening. The stalls are up and selling and the barbeque is roasting sausages. 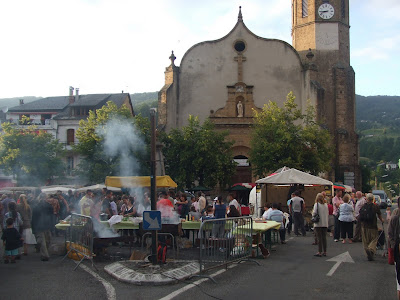 If you're searching for an alternative, though, all bio (organic) tofu and salad baguettes are being sold next to the traditional saucisse sandwiches. 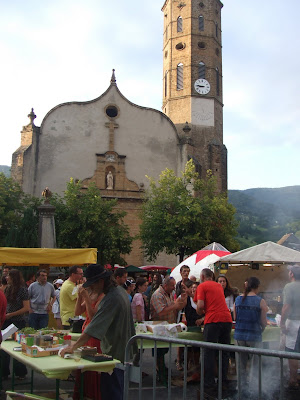 In a break by the band, the cook grabs his cow horn and blows a two-note announcement: 'Sauciiiiiiiise!' he yells. 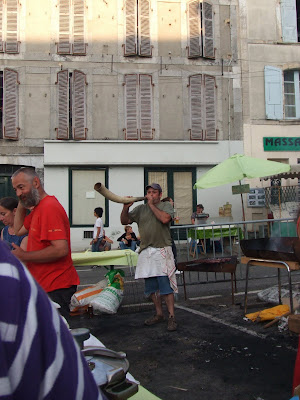 The old and the new cohabit happily. 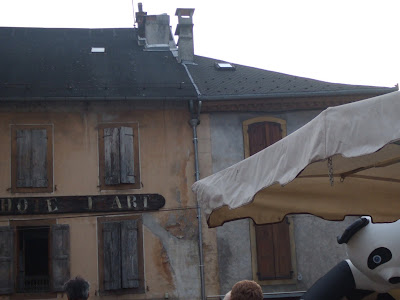 And the activities of a traditional French marché de nuit sit very happily alongside the alternative lifestyle we're coming to recognise as a key feature of the valleys above Massat. 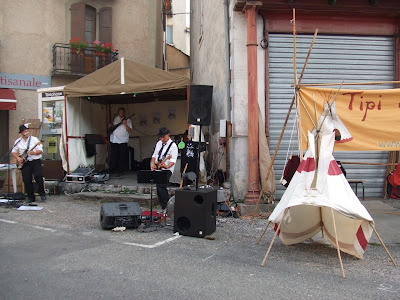 As dusk draws in, the baba cool (hippie) element comes out, beginning to outnumber the holiday makers and traditional producers of crèpes, honey and leather goods on the stalls. 'I hate the smell of tobacco!', complains one of the boys. 'Don't worry, son, that's not tobacco', reassures his dad. 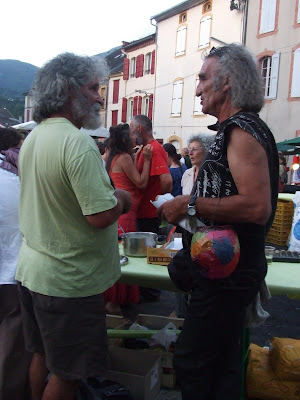 We've moved on from the traditional black tie/black hat band covering English language rock hits of the 20th century, and are being entertained by a much more innovative and exciting band which plays their own French-language reggae-rock pieces, accompanied delightfully by a balalaika. It works! The band are called Atkaz and they are worth listening to here, on MySpace. 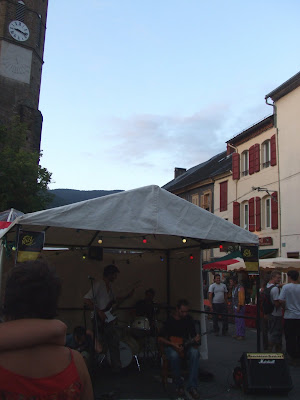 We've eaten our saucisse sandwiches to the sound of the rock balalaika and queued for what seems like hours for crèpes (Son 2 has sugar on his, Ben and Son 1 choose honey with cinnamon, and I go for home-made ginger preserve, a gamble that pays off). It's really dark now and I frankly have no idea what time it is. Ben is drinking some valley-produced blackcurrant liqueur, and seems equally unconcerned about the time...
j
And then everything turns orange... 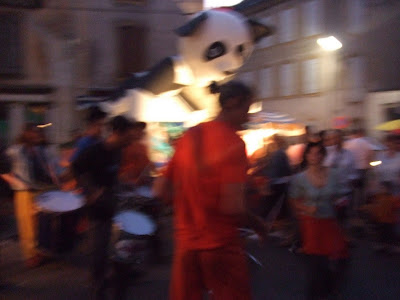 ... and booms that shake lungs and heart fill the square. 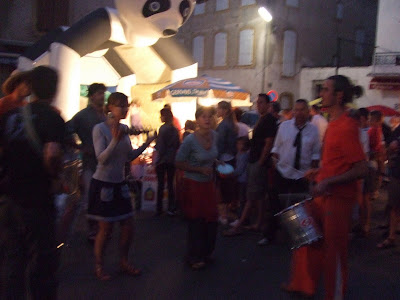 There is some ordinary commerce still going on, at least at first. People are still looking at handmade jewellery, handpainted stones and handmade handbags, 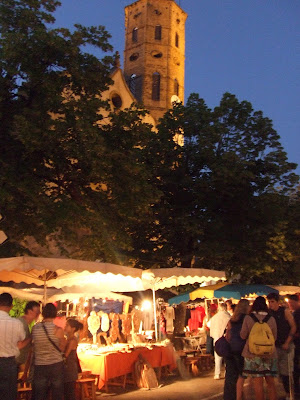 but the heart-shaking beat of the percussion band draws everyone to it as it ambles (think Shaggy from Scoobydoo) around the square. 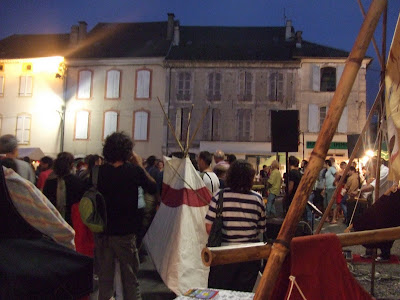 Certain inhabitants of the square aren't too happy. The boys have finished their crèpes and have decided on a donkey ride to finish the evening, but the donkeys won't be ridden while the booming continues. 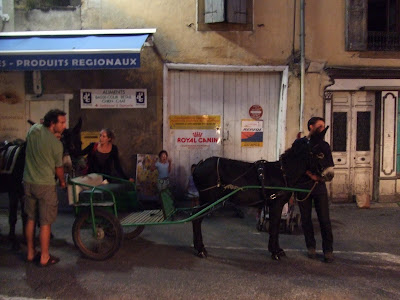 Their owners are phlegmatic, but must be loosing quite a bit of money as the band plays on and their donkeys fidget nervously. 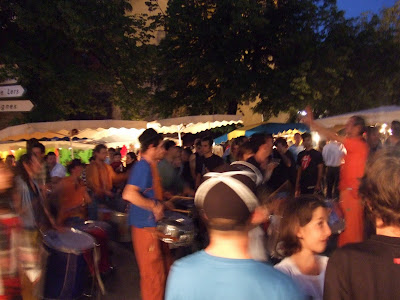 After half an hour of waiting on the corner of the square, with increasingly dark rings under their eyes, the boys are given their wish. 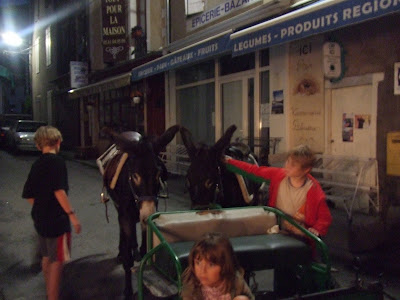 I have one of those awful 'mother' moments, where I have to tell the donkey owner currently lifting a small boy onto the animal that he, in fact, promised that place to my sons about 30 minutes ago, and that they've been waiting patiently ever since. Everyone (including the small boy) is politely accepting of this intervention, but I experience that terrible British horror of having 'put myself forward', which I would never have done for anyone but my sons... 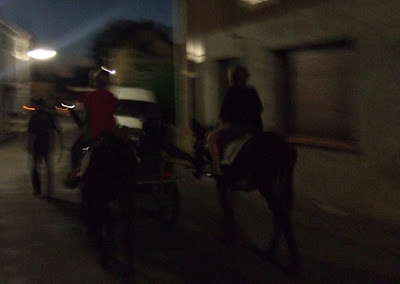 The boys seem to recognise this, and actually turn and thank me before setting of for a satisfyingly dark ride around the streets of Massat. I think it was the last ride of the night, so it was worth putting myself forward for! 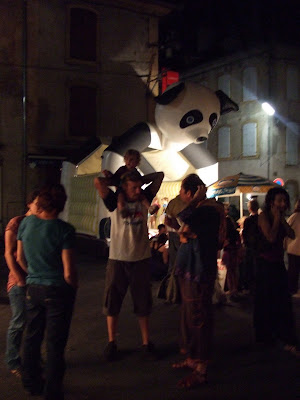 Only the donkeys are going home - babies, children and adults, baba cool and otherwise, are still going strong. Oh look, there's another yurt! 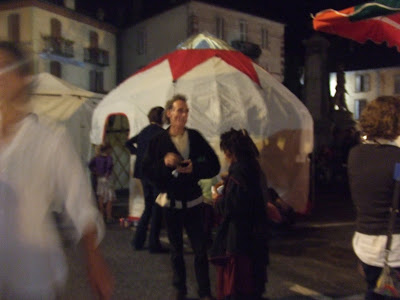 For a final treat, the boys choose to spend the last of their money on barbe à papa - yes indeed, in France, this spun sugar candy is called 'Father's beard'! It's commonly spelt barbapapa, which I think is the origin of the name of the famous pink cartoon character. 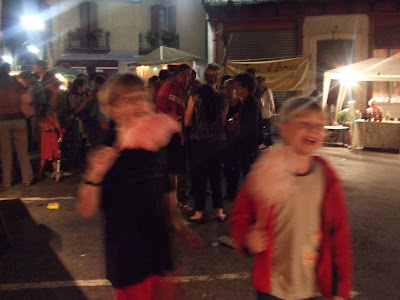 So that's it - a sticky walk back to the car, and a wait while various hippie vans reverse their way out of the carpark and head back to the hills...
j
A good night had by all.
Posted by Floss at 12:30 PM

Lovely! What an insight into genuine french culture. I really fancy a crepe now! Poor donkeys, though, it must have been nerve wracking for them.

What a festive evening. I see we in the U.S. are not alone in hippies that never grew up. My very favorite part is the sticky walk back to the car...I was in heaven as a child when I had a pretty pink or blue cloud of cotton candy or Fathers beard as the French call it...Good for you for making sure your boys got their turn on the donkey.

I love the night markets, and that one was certainly different! So glad the boys got their donkey ride at last.

That looks such a Vicki sort of evening (though not the 'baccy' bit) :)

Hi Floss, I have just spent a delightful time catching up with all your news. I day dream of yurts and tipis, am just slightly concerned that I am turning "alternative" in my maturity!! Or maybe it's always been there.

Your photos are so evocative, I could have been there wandering through fields and over streams - thank you it was a wonderful journey! Hugs Debs xx

You have certainly captured the atmosphere in your photos!
Sorry if I have missed some of your posts lately, we have been having work odne on the house, and also we have had to put our lovely
Archie to sleep too last week, so it has been difficult to find the time or the will to get on blogger at the moment. Suie xxxx

head for the hills! what a great lifestyle those hippies must have... lovely to see a night market in full swing and what an experience for your boys. Bettyx

I think it is good you did that - it is only fair if your boys had been waiting so long...what a wonderful event. It made me realise that I have forgotten... How did you come to be in France in the first place and did you know french before you arrived? What actual part are you in? I feel bad asking - I am sure I once knew but these facts evade me...I guess I am thinking about it more so now with myself being in france. I also just saw the title of your entry about working in a chateau - will have to go back and read that...