A Second Pause in Advent - the Grateful City

I mentioned that we'd be away for the weekend, but I didn't tell you where - the boys and I took the train to Lyon, to stay with Ben (he usually comes home to us at the weekend). It was the boys' first visit to see their dad's flat and his university, and the large and very beautiful city of Lyon. 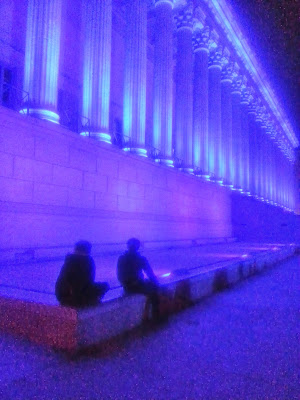 Lyon is one of France's biggest cities, and to me seems very elegant. I feel a bit of a country bumpkin wandering round it, but I'm prepared to put up with that! 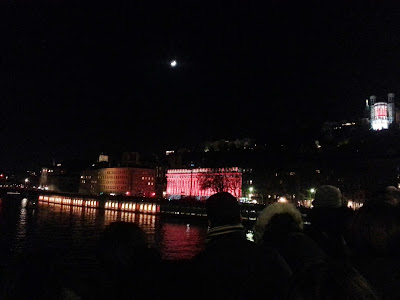 We decided to vist Lyon on December 7th and 8th because every year the city holds a huge Festival of Light, which combines lighting effects, film, music and tehchnology to light up the whole city. 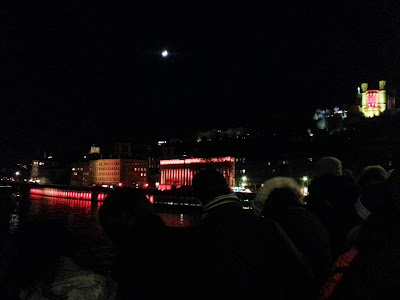 The boys were fascinated by how the lights changed on both the Law Courts and the underground river-front carpark below it! 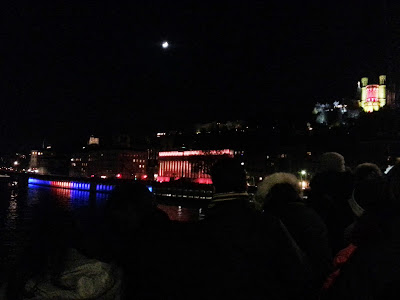 Watchers on the many bridges or on the opposite bank could see the lights dance, 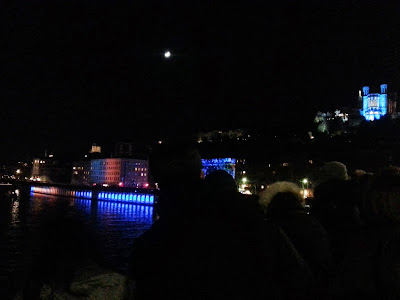 to the music from the film Lawrence of Arabia! 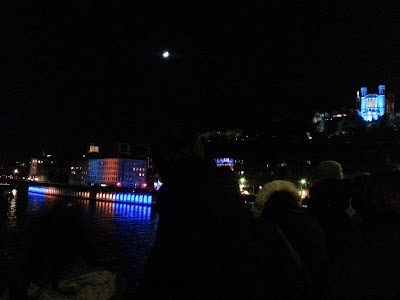 The wonderful Basilica on the hill to the right was also part of the same show, and the lights changed constantly and majestically. 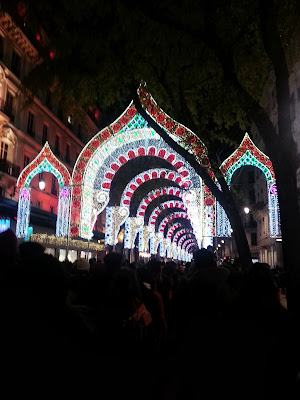 Other parts of the town had more 'classical' lighting, with two long avenues like this one down the main shopping streets. 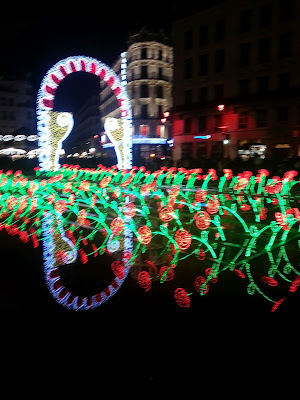 We stopped by this reflecting pool to munch on hot chestnuts. 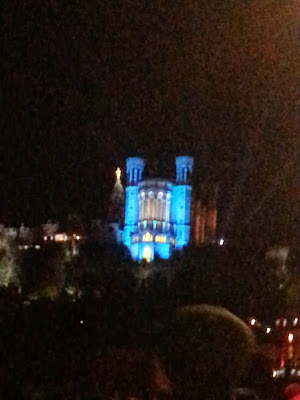 To the left of the basilica you can see the original reason for all this light, 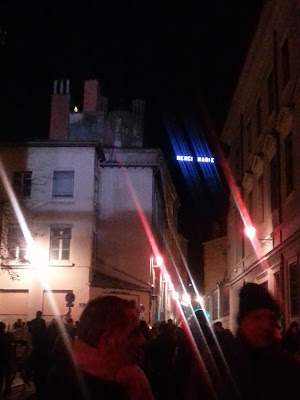 and to the right, in between the light shows, you could see it clearly stated: "Mercie Marie." 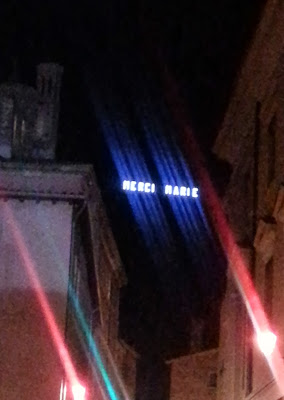 The Festival of Light stems from an occasion when Lyon was threatened by the plague, which was affecting towns, villages and the countryside around. The faithful citizens lit candles in their windows and prayed to Mary, and the city was spared. Now, as a Protestand, praying to Mary is fairly alien to me, but it's impossible not to be impressed that, centuries later, people are still remembering to say a grateful 'thank you' for their deliverance. Answered prayers are something we are prone to ignore or forget, and centuries of gratitude for one big answer seems very appropriate to me. 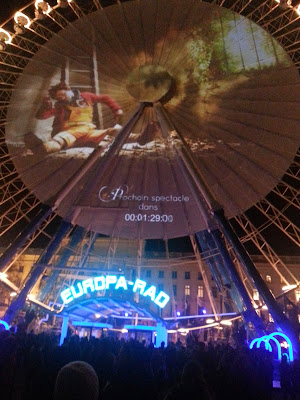 France is a secular country, both legally and psychologically, these days. The opportunity to draw in tourists and patronise the arts is (perfectly reasonably) a big part of the festival these days. The huge ferris wheel which stands in the main square is designed as a working ride but also as a cinema screen! 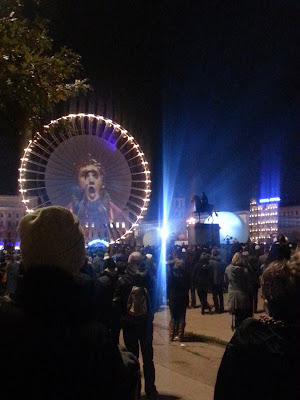 This year's film, which was mainly shown on the revolving ride but also moved to the large balls, the horseman statue and various nearby roofs, made great use of the circular nature of the screen! 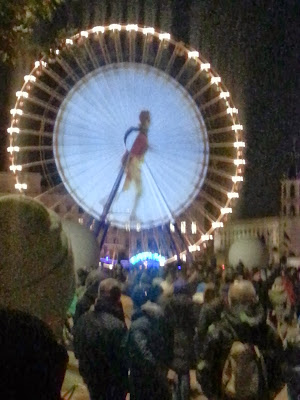 The pierrot-figure comes to life and has a series of misadventures, 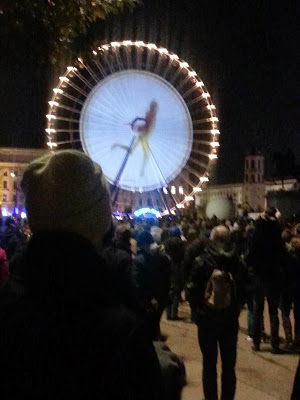 arrgh, it's beginning to turn too fast! 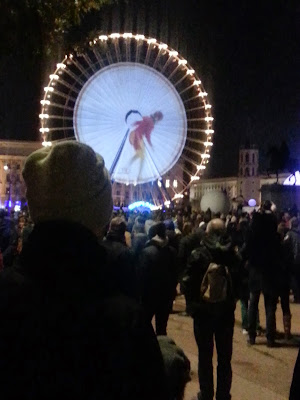 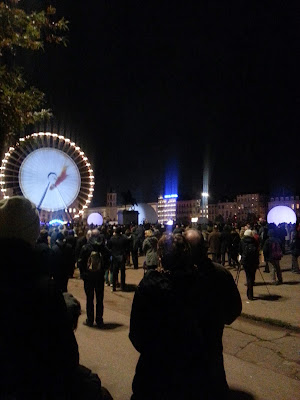 Ker-splooey! (as Calvin would say...) 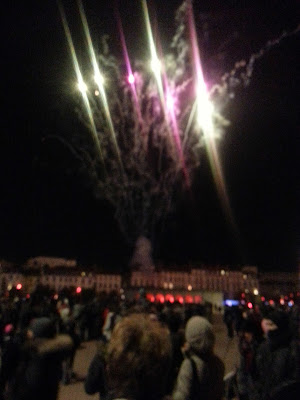 The constantly repeated shows used fireworks, lazers, flames and music to tell their stories or display their effects. 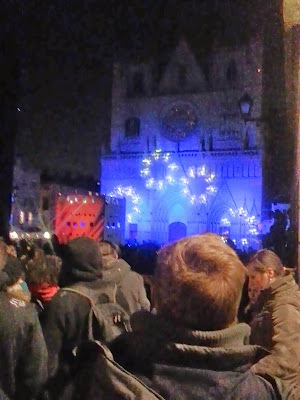 Yesterday night, after we'd gone home, Ben went back into the city and sent me some live footage on my phone of yet more shows! 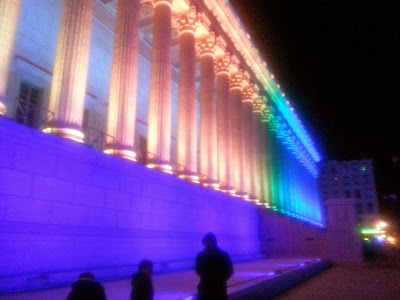 So my weekend has been filled with family time, light, and a reminder of the value of gratitude. How about you?
Posted by Floss at 11:44 AM

We were planning to go, but I have a stinky cold and didn't feel like doingf anything much. So it's nice to see some of the lights vicariously through you!! We last went about 5 years ago and really MUST go next year!

What a fantastic time you had. The lights look amazing. I would love to go one day. Thank you for sharing.
Rosezeeta.

It is heartening that they are still giving thanks for deliverance, even if things have moved on in another sense!x

Thank you for taking me to the festival of lights then, I've always heard of it but never seen any picture until today.
Talking about gratitude, a belated thank you for your sweet comment and best wishes on my blog some weeks ago!
Michela x

Wow! What beauty! I'm glad you and Ben had some good time together. When will he finish his coursework?

Lights look amazing and your photos are lovely.

Wow! How lovely. That must have been incredible to see it in person. :) Kit