The Old and the New, plus a little more info on Advent

Ben and I, belatedly, got round to trying this year's Beaujolais Nouveau last night: 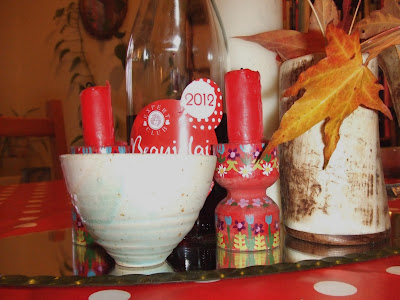 It's an important tradition to us, not only because it's a good thing to join in French customs, but also because it marks an anniversary for us - eight years ago we came out to look for a rental house near Toulouse because Ben had been offered the job here. I was fairly ill and for many years I found it hard to look back on that time with any pleasure, but now I can taste the Beaujolais and reminisce with enjoyment on our first visit and all the years that have passed since! 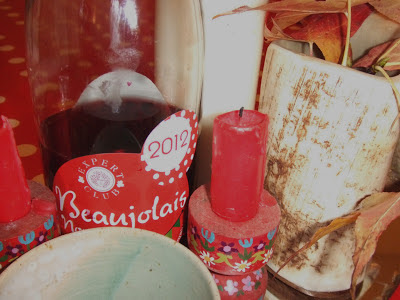 Thank you to everyone who has already signed up for A Pause in Advent this year. We'll be starting on Sunday 2nd December, as Advent begins quite late in 2012! For those who want to know more, the idea is that we post on any subject which allows us to calm down and think straight at a busy time... Many people have a religious or spiritual take on the event, and many use the pause as a way to emphasise the value of simplicity or traditions old and new, and to dwell on the importance of people above profit at this consumer-driven time of year. We write about what we've been doing, what we've been thinking, and what we hope for. Will you join us?
Posted by Floss at 11:26 AM

Floss, please count me in for A Pause in Advent. Looking forward to reading the blogs who are involved.

I love it and I'm SO looking forward to it, Floss! Thank you so much for providing this rich expression of Advent for all of us.

I can't promise to join in as I never turn the computer on at the weekend and work a long day on a Monday but I do look forward to reading and enjoying the calming, thoughtful and peaceful reflections of others. M x

What a lovely idea Floss. I shall keep an eye out for the posts. Glad to hear that you are so settled now and enjoying life in the french countryside. A big adventure x

I'd like to join in this year, probably sporadically, but I'll be there.

I love the little candle stick holders. I just want to say thank you as well for sharing all the Frech traditions, it is really lovely to read about. x

May I join you this year please? I have so enjoyed reading these posts in the past.

Hello Floss..I realise that I have inadvertently or perhaps instinctively written a Pause post so yes please I'll pop in too & look forward to visiting everyone. x0x

Hi Floss! I'm glad Nancy is playing along this year.

Hi Floss,
I'd not thought about pause in advent, but I was mulling over an advent post for tonight, so I'd like to join in please.

Hi, Floss -- I'd like to join in on the Pause in Advent too. Could you add me to your list on the sidebar? I did the first post at my blog: www.mkatchris.blogspot.com. Thanks!!