Inside the Elephant Box - Part 1

There are two layers in my elephant box! 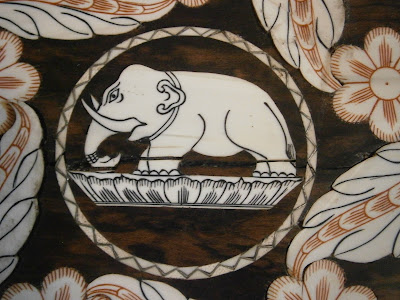 The box was given to my mother and grandmother by friends whose Victorian grandmother had been quite a collector... 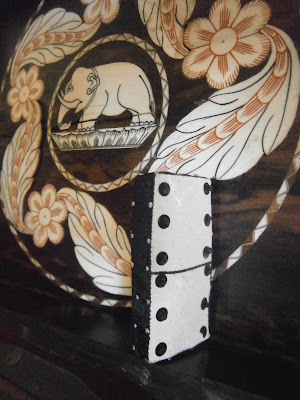 As many of you guessed, it contains a lot of sewing equipment (no buttons, Betty, so you can read on!), including this quirky little pin cushion designed like a domino. 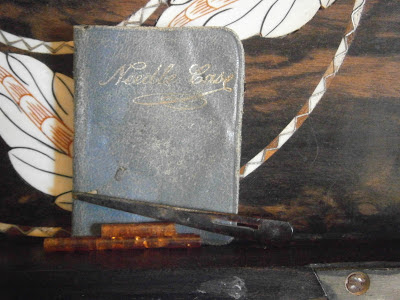 The domino pin cusion was in a compartment on the left, and, lifting the little lid above it, I found this leather needle case, the large 'needle' and the two amber rods... even after years of treating this box as my 'rainy day' box, to share with my grandmother, I really don't know everything that's in it! 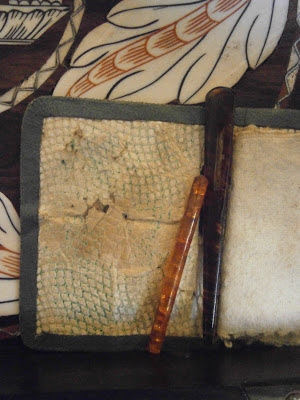 Juanita makes a key point- not only is the box's inlay ivory, but the needle case seems to have snake skin on it and the 'needle' is almost certainly tortoise shell. My mother taught me to be horrified by the killing, but to respect these antique artefacts - I wonder what the rest of you think? 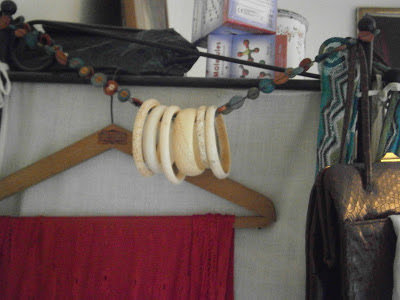 Just to add to my ethical issues over the ancient massacres of endangered animals, here is a collection of carved ivory bangles my mother bought in charity shops and (one of) my grandmother's crocodile-skin handbags. My mother bought the ivory bracelets because she couldn't bear to see something which represented so much life and work (obviously mainly on the part of the elephant) being sold as if it were plastic. She never wore them.  My grandmother bought the handbag because that was just what you did in those days... what do we do with it all now, I wonder?
Posted by Floss at 5:51 PM

I am loving seeing this box opened and explored.

With regard to the ivory and crocodile skin - I think I am with your mum. I would be horrified at the thought of any of it being 'new' and of the killing of these animals for their parts being continued, however they are beautiful objects and as antiques I can not only respect the item and the craftsmanship, but also love the age, history and beauty of the item.

I am with your mother - if the items are already here and disposing of them would not save the animals now then keep them but to think of killing and maiming animals now for such items is horrible. They are beautiful and the craftsmanshipo too but it would have been better had they never been made. But we used to wear fur coats in the past (well I didn't but peopole did) and think nothing of it. Only now do we consider the ethical implications of such things but then maybe in the future people will be appalled at what we do now for example the destruction of forests, genetic engineering and so on - who knows!

I wish "luxury"-item seekers would ask themselves the same question too: What do you do with all those endangered animal goods? I think about diamonds too, and wonder if that little bling is so worth all that hard-earned money. (Hard-earned for us, not so for those who have it...) Not to be hypocritical, but I did enjoy looking and owning little diamond-jewellery. But I look at them now, and think, "What was I thinking?!?!?" But then again, I am always hard on myself.

And you know what Floss, I did grow up with animal skins and ivory carvings. My dad used to be proud of owning these material things.

What a fabulous heirloom - I love the amber piece. Yes, difficult question - fur/skin/ivory is indeed beautiful and the era those items were made in was ignorant of the methods of trading. I would contact CAFT (campaign against fur trade) or similar and ask them how to dispose of the items - I hope that doesn't offend you Floss and I am most certainly not being critical of your appreciation of beautiful things from a time gone by, I wasn't very caring about all this until years ago I visited an elephant orphanage in Nairobi (Sheldrick) which raised my awareness.