ATORA, or, What the British Abroad Can't Do Without

Way back in October, I showed this picture of groceries picked up in Edinburgh Tesco. We were stocking up on the things that Brits can't do without, or our own version of that list, anyway...
j

Sarah from NZ wondered what wonderful goodies were inside the Atora packets, and I thought I'd keep her in the dark until now! Hold on a bit longer, Sarah - I'm going to tell you what else is on our personal list... 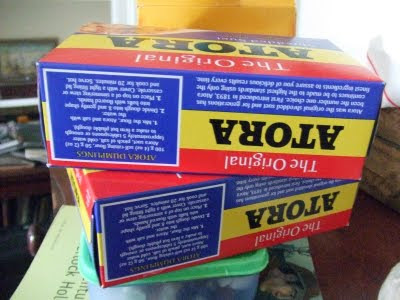 For the boys, Marmite. Personally, I hate it, but it's one of those love-it-or-hate-it British items and it comes out with the bread every day as far as the boys are concerned. It is available in France, but it's expensive and the jars are small! 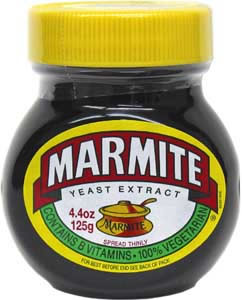 Sandwich Spread is another one I hate, but it's Ben's Comfort Food of Choice. After a certain point in the evening, Only Sandwich Spread Will Do. His mum was most amused when I told her, as his dad is just the same... 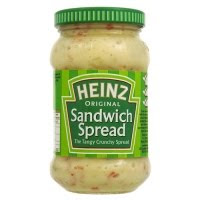 As with both the items above, you can get Cheddar in France if you're prepared to pay over the odds. But three out of the four of us love strong farmhouse Cheddar, and we're prepared to save it for those occasions when someone's been in the UK rather than trying some mass produced substitute. Two summers ago Ben took the boys to Cheddar Caves and they tried out all the different varieties - extra mature won for Son 1, and Mild with Marmite (!) was the favourite for Son 2. 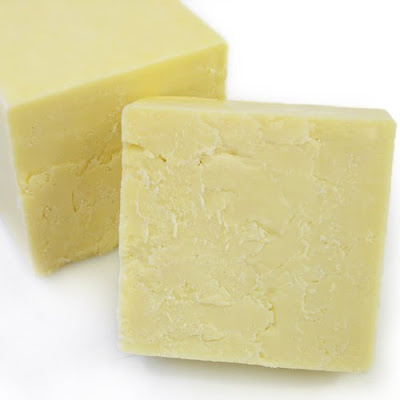 Now for me, I really do like a little glass of Ginger Wine on a cold winter's evening. If I have space, I bring back a bottle or two in the suitcase... 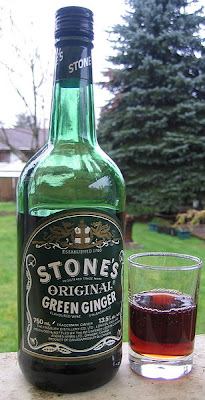 And finally, to the Atora! It's not yummy, Sarah! It's pretty unpleasant, actually, but it's essential at Christmas time... 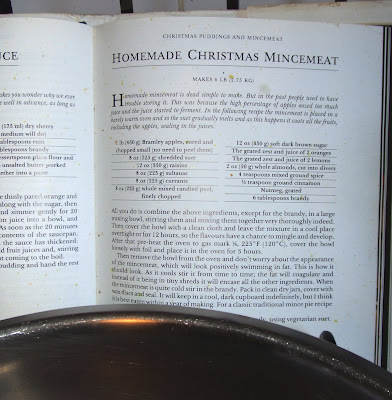 ... in both Christmas Puddings and Mince Pies! This year I'm just making Mince Pies, as we'll be with Ben's parents on the big day itself. So, for mincemeat, chop up apples... 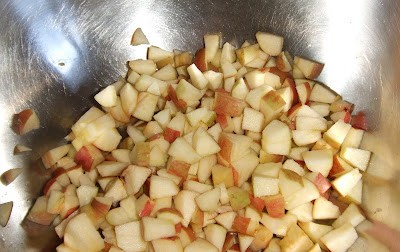 and add the suet. Have you guessed what it is yet? (Rolf Harris accent optional.) 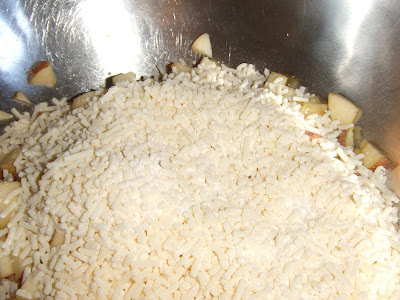 It's fat - traditionally animal fat, basically the fat from around the kidneys of beef animals. It's grated and rolled in flour. 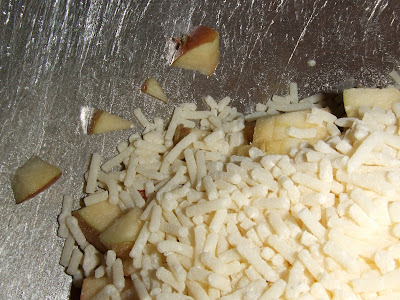 Two years ago I couldn't get any Atora from the UK and I asked our local butcher to save me some kidney fat. I grated it with flour and it made perfectly decent suet. But Atora is far, far easier! You can get vegetarian Atora too. 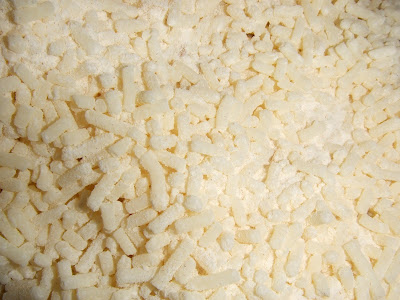 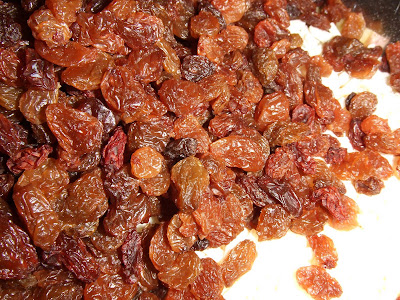 sultanas, and currants if you can get them (I couldn't). 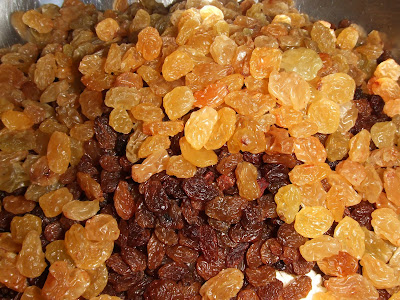 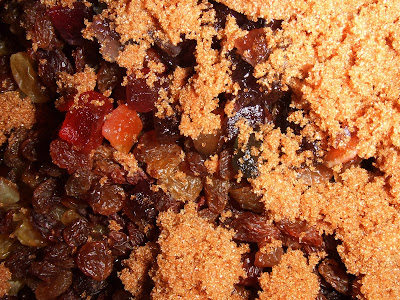 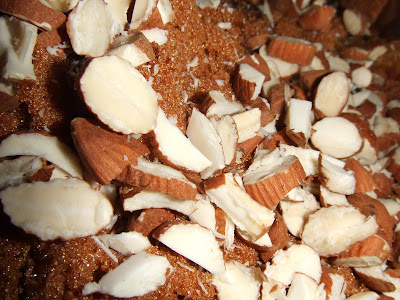 The zest and juice of two lemons 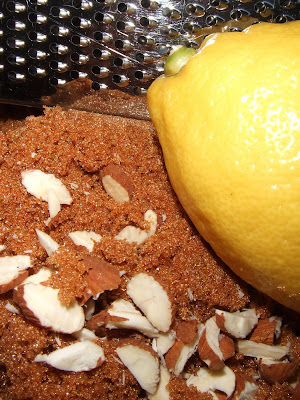 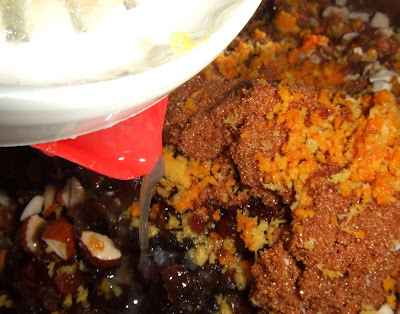 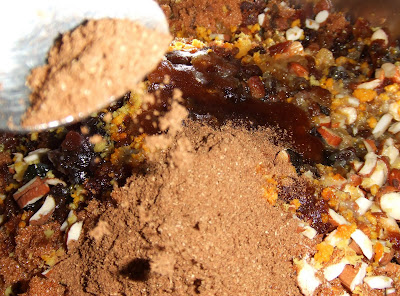 a bit of Fair Trade cinnamon 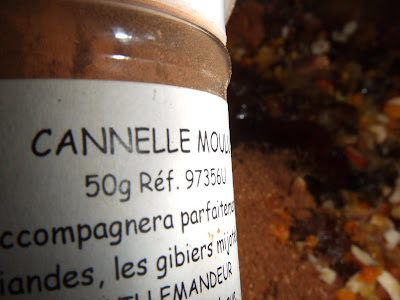 and a little nutmeg. 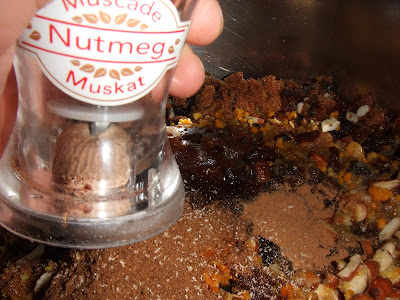 Stir it all up and you've basically made mincemeat! 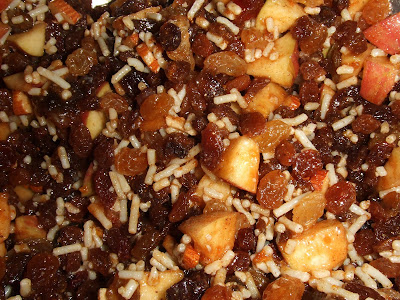 Delia, however, recommends leaving it to soak overnight and then putting it into a very low oven for three hours before adding brandy, so that is what I shall do...
Posted by Floss at 6:00 PM

I don't think we could live without atora either. Not for mincemeat but for my absloute fav beef stew and dumplings. Come to think of it I have never made my own mincemeat I really should give it a go.

Oooh yuck that stuff is discusting! Why do you need it in Christmas mince? I don't use anything like that in ours. Well I did make ours once, years ago!! Does it melt down when cooked? Still sounds a bit yick. I have to say that yours does look very nice when finished, but I know that white stuff is in there hiding.

Oh and English Marmite is completely different from ours but I'm a Vegemite girl. It's not as strong.

Not surprised, Sarah! It's the mark of a true Brit know what goes into mincemeat and still eat it! My French butcher thought I was nuts. But don't forget there is a vegetarian option...

Historically, Mince Pies were savoury, and made of meat mixed with dried fruits and spices. Somewhere along the way we lost the meat but kept the fat.

I will never look at a mince pie the same way again!

I use vege atora, but couldnt be without it. I have sorted the mincemeat, made it last month, but I can never make enough - both MiniMad and MadDad love mince pies.

Also both the boys love dumplings too!!

I prefer vegetarian Atora and there is an English shop up here which stocks it.
Trying to get it in Australia was fun....blank looks all round till I went into the city, Sydney, and bought it by the lb from a Harrods type shop.

Not being a true Brit ( Kraut ), I have never made mincemeat before. Never actually made mince pies either, because my lovely mother-in-law has always made us very yummy mince pies. I wish I had known you were going to post such a fab recipe for mince meat though, I went and bought a jar a couple of days ago, because this year, I am going to make mince pies myself for the very first time. My friend JJ has given me a great recipe for mince pies with a bit of a twist.

I wonder what I would have to stock up on if I moved abroad - mmmmmmmm, that's one worth thinking about.

Have a lovely evening,

ps. I remember Sandwich Spread from my school lunch box days - I haven't had it in years!

I have not had mincemeat pie in many years. I don't think the kind I ate had animal fat in it tho. A trip down memory lane with the sandwich spread. I remember eating it on bologna sandwiches and sometimes just spread on white bread.

You are not the first Brit that I'm hearing Cheddar from :) Even though we are in "cheese land", friends from UK dismiss the cheeses here for a good cheddar. Marmite... I don't remember the taste. But I'm certain I'd have had it when I was younger, and yes it is love it or hate it.

When I saw the first picture of Atora, I thought it might have been toothpaste :D I was so wrong!
But wow, a mincepie definitely sounds very hearty!

I've never make mince pie..thank you for your recipe. It needs many ingredients

I used to take back to Spain: Calpol, Gripewater, Vic, M&S bras for my best friend ! powdered baby milk and strong cheddar cheese !

Guess what?!! I made mince pies for my dear husband tonight whilst I cooked dinner. Bought pastry, bought mince! I've checked the ingreds and there is no sign of fat of any kind - thank goodness!! I'm going to make some that I can eat tomorrow and I'm very much looking forward to having one with my cup of tea. Well OK probably a few!

Had no idea so many sweet things went in mincemeat! But you made me curious - maybe I'll make it (after Christmas).
About the Marmite - they eat it in Holland on bread (sandwiches) and is pretty salty. One of our Dutch friend can't live without it. When he came to the States, he brought it with him LOL.

What a fabulous post. We always have atora in the house, but use it for dumplings. I'm simply not allowed to make my weekly stew without adding dumplings now, as the kids all love them so much. But buy jars of mincemeat, I'm afraid!
As for Stones - yummy, but for me, it's my Christmas drink of choice. Stones and Christmas carols and baking and I'm in heaven each year!

Stones Green Ginger! I havnen't seen a bottle of that in donkeys years. My mum and dad were big fans. I loved this post Floss, it's so interesting to see what people crave when they live away from 'home'. My husband has a Swedish/American background, AND he loves food so there is an endless list of delights he misses and stocks up on. Luckily we can go to Ikea for some of the svenska items. Anyway, all this talk of food is making me hungry! Better go and find something to eat... xo

Oh, I haven't had sandwich spread in years! As for marmite - I'm more of a Bovril kind of girl. Homemade mincemeat is certainly the best.

Ha Ha Floss, I am missing mince pies so much that I just ordered them from a very expensive British food on-line store here in the U.S. I ordered a jar of mince too, but it just won't be the same as home made. I noticed I can buy Atora on the same site so that's what I am going to do next year, I would really love to just bring a couple of jars of my Nana's home made mince back but very strict rules on bringing food into the U.S. - Nothing like homemade mince pies! enjoy!