It's been an incredible week - exhausting but full of exciting opportunities, especially for Son 1, who was at the Museum of Antiquities in Toulouse for his first work experience. As I was saying earlier, in a rare fly-by the computer, this has seems to have involved me spending most of the week navigating narrow, medieval city streets by car. Sheesh! But of course I knew I could make the best of this - on days without much work I spent lots of time in the city centre, which I normally avoid. Yesterday morning I dropped off the young man (because that's how he seems this week) and went around and then into the medieval basilica church of St. Sernin. Poor St. Sernin is a home-grown martyr. He was the local church leader in Toulouse at a time when the Roman city felt particularly threatened by invasion, and they tried to appease the traditional gods by insisting the Christian leader sacrifice a bull. St Sernin refused and was tied to the bull for his pains. The bull ran off (its route is immortalised in the street name 'Rue du Taur') and the saint's remains were buried where this church now stands. The church is much more recent than this story - it's mainly what we would call 'Norman' in England, although that's meaningless down here! 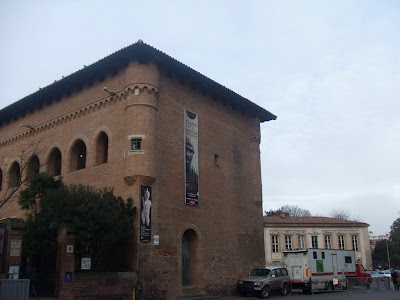 On one side of St. Sernin's basilica is the old medieval hospital, which is now the museum. I spent a bit of time looking round it, and was then joined by Son 1 - whenever he didn't have appointments or tasks he was given free time to drift round the museum. He gave me the guided tour that he'd already been given by the staff, and showed me lots of lovely little details that I wouldn't have found on my own - particularly details such as carved snails and lizards on the marble plaques from the imperial villa near Toulouse. It was great to give him the chance to share his knowledge! 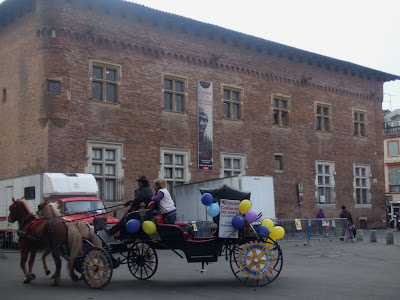 The rather functional, modern vehicles in the photo of the museum are explained in this snapshot! Life goes on in Toulouse - behind the medieval buildings and above the Roman mausoleum was a carriage, setting up ready to ride round the city advertising a Blood Drive in the City Square! I hope they got lots of blood - we can't give ours here because we lived in Britian during the Mad Cow years...

Have a lovely weekend, friends! We will be recovering, chopping wood, and hosting the usual round of teenaged boy-related events.
Posted by Floss at 5:42 PM

Sounds like you have had a busy but lovely week!

Work experience sounds as though it is most interesting, for both of you!

You certainly made the most of being taxi for the young man. Sounds like you both had a very good week.
Carol xx

Your photos helped me to remember visiting Toulouse once - we went to a market there, and bought (I think) some sausage. As you would! It does indeed sound as though you and your son have had a profitable week.

Oh, I love the photos. Like taking a vacation on a snowy Saturday morn. :) Kit