We had a whirl-wind week last week, with Son 1 and me charging to and from Toulouse (apparantly one of Europe's most congested cities), Ben also working hard and Son 2 feeling slightly neglected! A domesticated weekend was called for... 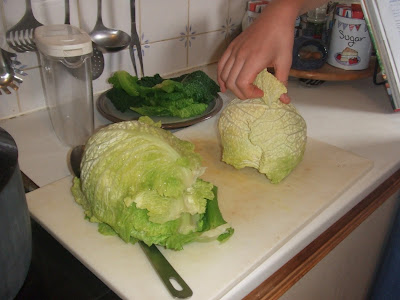 Son 1 decided to cook, big time. He made fudge as a thank-you present to the museum staff who'd helped his work experience, and then turned to the Hairy Biker's Cookbook for various feasts: on Saturday night (rather late) we ate Romanian mititei (pronounced 'mitchi') and a fantastic Mexican chocolate pudding - sorry, no photos, we were too busy eating! We even fed Son 2's friend, who was staying over as a favour to his mum, and had eaten before he came... he had space for a choc pud, though! 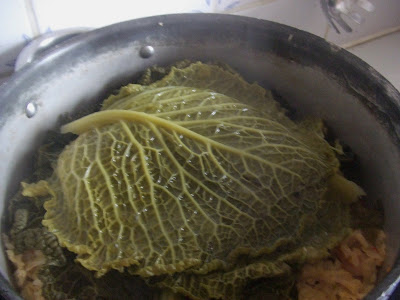 On Sunday morning I decided to get in the kitchen with Son 1, as he was attempting to produce Romainian Sarmale, which has a two-hour cooking time. Even with me and Ben helping the night before, Son 1 had been a slow chef... but with two of us on the go we produced this really excellent stew. It probably doesn't look special but 4 out of 5 of us (Son 2's friend included) gave it very high marks - a super Sunday lunch! And only slightly late. We don't pay any attention to Son 2's vote, unfortunately, as he's a very conservative eater... 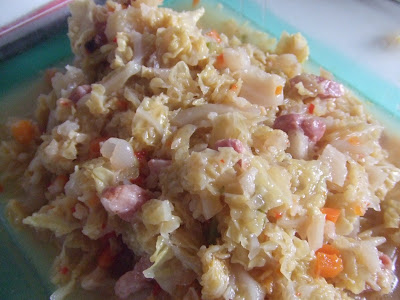 On Sunday afternoon the three boys went off to play with three brothers who live nearby ('their parents were slightly overwhelmed at times', admits Son 1...). I joined Ben in the garden, where he had been chopping wood for a few hours. I held branches while he sliced through them with the chainsaw, and then moved the wood to the shed, where he stacked it beautifully: 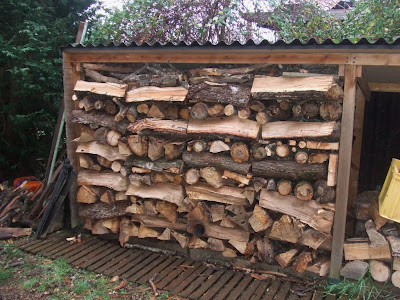 That should do us for the rest of the winter! 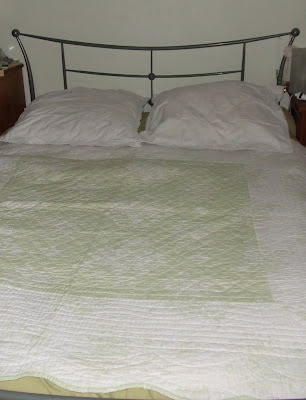 Today has provided the blessed relief of staying home alone. I tidied and sorted and cleaned, and took some photos! The (modern) boutis quilt and vintage lace pillows came from a charity shop last week, and the 'wooden' tray below (it's actually modern plastic) was from one of the Troc shops in Toulouse. My visits there were not entirely cultural, as you see! 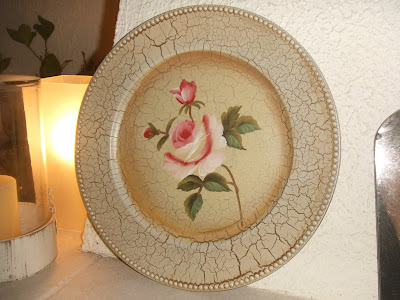 Today I decided to have one of my periodic battles with my very own 'Sofa that Mocks Me'. (The original 'Couch that Mocks Me' was Lola Nova's and can be seen here and here, but I have one of my own...). I was fairly happy with the technicolour cheeriness (and above all cleanliness) of the result: 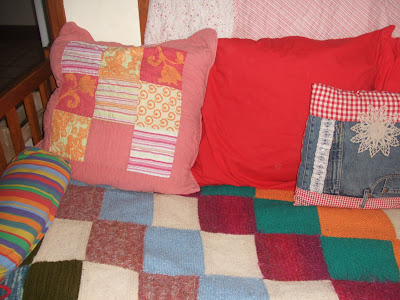 Whilst giving the rug a good hoover (not that you'd know it from these photos) I thought, as always, of Jane. She told me once that she doesn't like modern oriental rugs, but does like them when they've got old and battered. 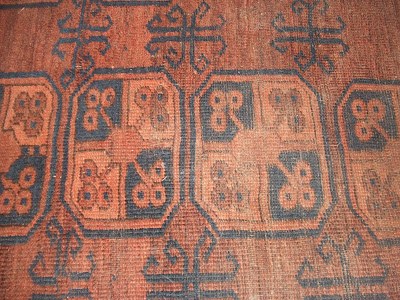 Old enough for you, Jane? (Spot the super mend by someone before my time.) 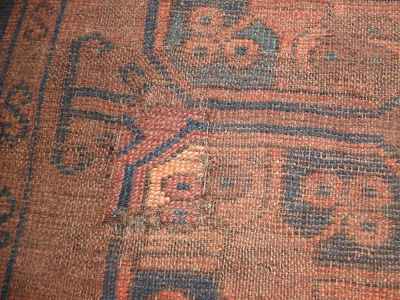 Battered enough for you, Jane? (I've mended this edge so many times that I'm currently on slobby strike, I'm afraid.) 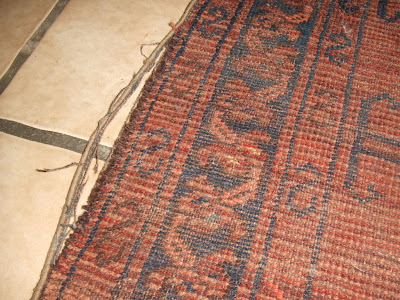 But I really, really, do love my rug, and I think Jane will too! 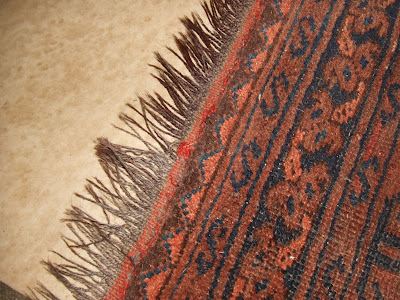 So, the rest of this afternoon holds more time in the kitchen for me. Serge, our neighbour and Ben's partner in gardening swaps, asked if we could take half of a pumpkin (or courge). One of his had grown into the hedge, and the only way to get it out would be to cut down a tree or cut up the pumpkin! Sensibly, he decided on cutting up the pumpkin, having checked that we would take part of its bulk of his hands... 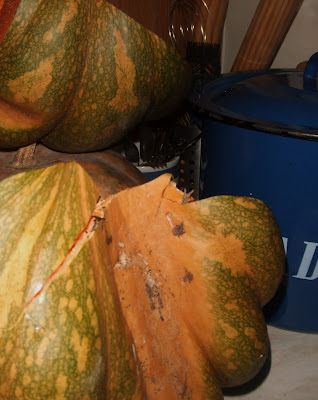 I managed to pass the quarter-piece on to another friend today, so now I'm left with half of this mis-shapen monster (do you see where it grew against the tree branches?) and am going downstairs to chop and bake and produce cheese sauce pumpkin bake and roasted pumpkin soup! So, what are your domestic plans this week?
Posted by Floss at 2:55 PM

Your oriental rug has encouraged me to get mine out again! it's about 70 years old and hand dyed and falling apart! I like to think it had a previous life in a bedouin tent, although more likely a bedouin warehouse somewhere! so out it comes with it's tatty bits to brighten our home once more. Your son is very adventurous with his cooking - lucky you! I am spring cleaning too today - I know it's mental but I LOVE housework!

Wow your weekend at home was lovely but very productive at the same time, we put up a bunch of wood also but wow your stack is amazing!

Jealous of all the food making at your home- since we don't have a kitchen I haven't been cooking or baking at all. :/

The pumpkin is rather large! My favorite thing to make with pumpkins and squash are bundt cakes and muffins- all my friends at college are always thrilled when I bring large amounts of food to school. :)

Yes, Floss I LOVE YOUR RUG!! The more care worn the better..the more patches the better.
A couple of weeks ago we moved the dining room table to clean...we found some worn patches WOOHOO!!
Jane xx
PS I think my love of old worn rugs comes from when I was little. My Grandma had an old old cottage,with rugs strewn on the floor, they were old and worn and looked just perfect.

You certainly got a lot done in one day! The food looks delicious.

And what a neat stacking job you did with the wood pieces.

I feel like I've had a little visit with you. Thanks!

What an incredibly neat wood pile! I can see that love and care has gone into that.
How nice to have sons who enjoy cooking, to be encouraged!

I have some "conservative" eaters at my place too. We call him picky though. He refuses to eat anything with tomatoes or chopped herbs.
That Mexican chocolate pudding sounds divine.
Thanks for stopping by my blog.

I'll have to make sure my husband doesn't see that woodpile or he'd be very jealous! Sounds like a lovely weekend, with some tasty foodie treats. I've only just discovered the Hairy Bikers properly, and everything they make seems to make my mouth water!
x

It's amazing what we can cram in to a days work.It must be great living in France.....all those beautiful markets to visit.....ciao Alison

What a lot of lovely domesticity! I think your sofa looks terrifically cheery indeed! I'm looking forward to the day when my own daughter might cook us dinner, how nice.

We once planted watermelons, the vines grew through the fence and the melons ripened on the neighbors side. This caused quite a dilemma, as our neighbors at the time were less than friendly!