I had a joyful visit to the local Flea Market/Vide Grenier after church yesterday - the heat hadn't really built up by that point and everyone was enjoying being a bit cooler than the day before, I think. Vendors were terribly jolly, and I gave them something to be jovial about, wandering around, as I was, with a bag like this: 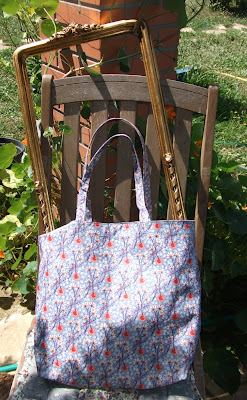 "Madame est bien cadrée!" the men told me, following me around. Just in case I thought it was Madame they were after, the women also followed me, with the more honest words: "Madame a acheté un joli cadre..." leaving it clear that they were interested in buying my pretty picture-frame off me. 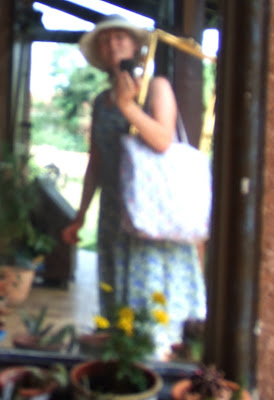 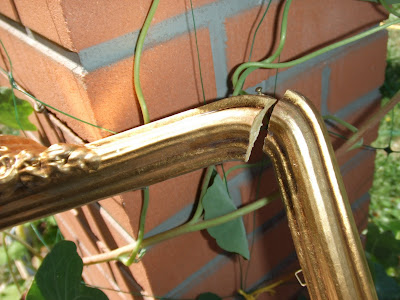 Anyway, I don't think they'd spotted what I noticed: this isn't an ancient frame but is made of some kind of extruded foam. Which has broken. No big deal, and in fact it made it easier for me to carry around (although I still got a crick in my neck - it was on the first stall I passed). 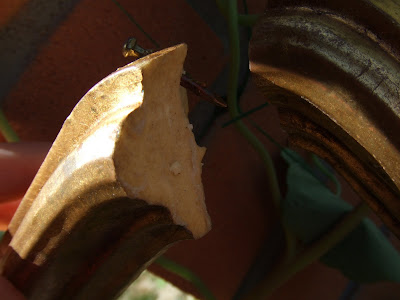 So, what else ended up in the Liberty for Red Nose Day bag?

A pretty mirror, made in a most intriguing style - I already have one like this (there's a sort of perspex over the painting, so it's not old, but they're not very new, either). The stamp on the back of this one solves its origins - it's from Belgian Africa. As that no longer exists, one can guess a date too... I think we're talking 1950s/early 60s. 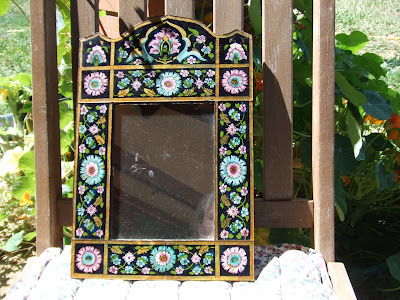 The genuine crown of King Dagobert, or so I was promised with a wink... 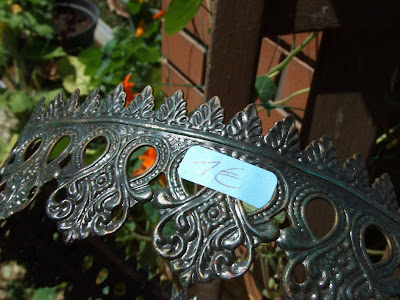 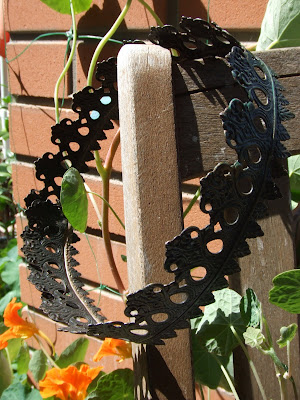 Aluminium cups for camping and picnics. I think they're great. Don't know if the rest of the family will drink from them, though... 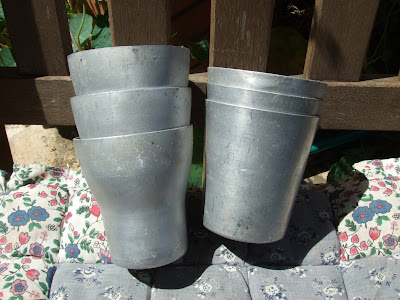 I've found some interesting links by typing SFM Aluminium into Google, but I haven't worked out the whole business of aluminium production and use in France yet. Seems there's quite a lot of use for the stuff! 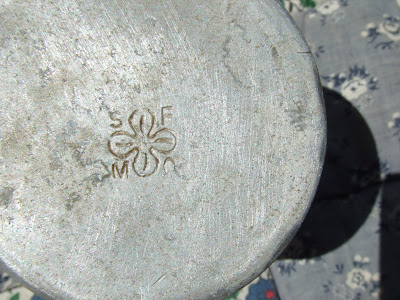 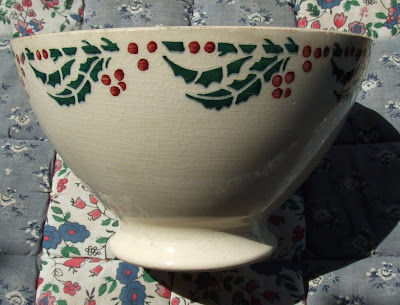 To me it looks really British, and very Christmassy. But it's clearly French (houx means holly in French) and I'm not sure it has the same festive significance over here. It won't grow around us, sadly. 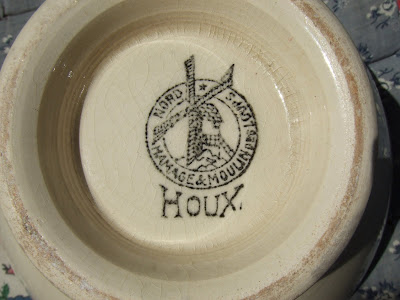 Just before you get too jealous, take a peak at the inside: 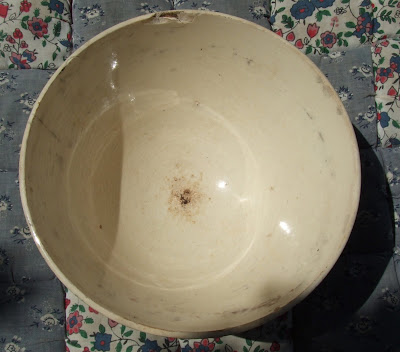 One young woman was selling off some of great-aunty's kitchenware. Hurray! She had a box-full for 3€, but seemed quite content when I picked out the few I wanted, 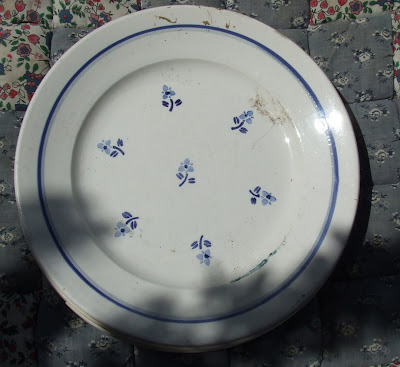 charging me 20c per plate and leaving the 3€ label on what remained in the box! 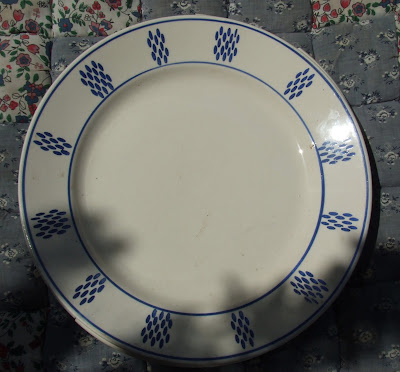 I also asked for the bits of the plate that hadn't survived the journey... 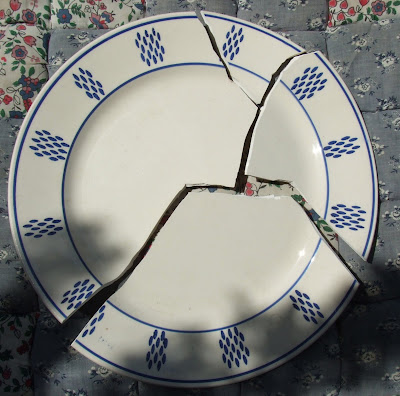 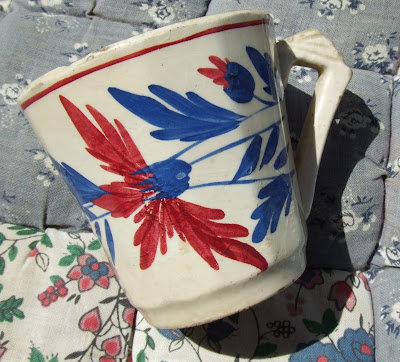 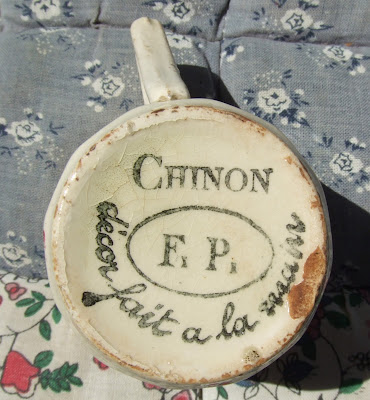 Wendz will know why I bought this! For a clue, see her comment on my Modern Vintage Challenge post. 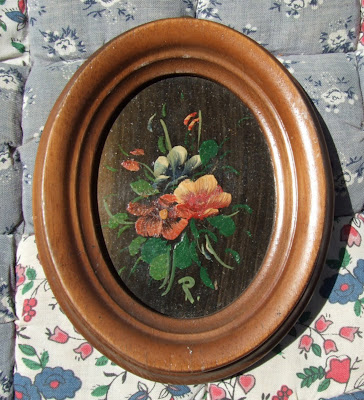 And finally, I got down to the bottom of the bag and could remove my lovely frame. 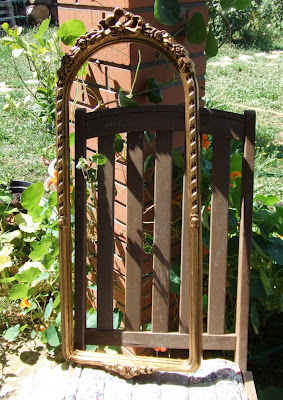 See, its admirers hadn't even seen the best of it, as I'd shoved it into the bag upside down. Bien cadrée (well-centred/well-framed) indeed!

I've had a wonderful time pottering about the house in the heatwave, seeking homes for my finds. I'll post about where they've ended up, soon!

Some lovely things there, look forward to seeing what you do with them.

I am just a tad envious - missing my vide-grenier fix this year is the worst thing about not going 'on holiday' this summer. Ah well, it will be all the better next time round! The crown and the little flower on wood are my favourites !
x

Wow you've got a great haul there! That little oval framed picture is so pretty - I have something similar to that in my sewing room.

You'll have fun putting that wall together - makes me want to do something like that, "but where?", she wailed. :)

I am really taken with the ornate frame, but also everything looks so much better when it's in France!

Some lovely finds there - especially that mirror :)

What a wonderful selection of goodies, I pariculary love the holly dish!

I like the crown - I would wear it so that I could have delusions of granduer when my house is in chaos.....

& did I spy a 'Liberty for comic relief bag'? we have good taste!

Ah I'm so envious, rummaging through french second hand stuff is so much more interesting!
I love my simple French bowl.

Can't wait to see where the crown will end up! ..or are you saving it for Advent perhaps?