The sun has come back (thanks for your kind hopes in that direction) and Thursday afternoon is a time I usually try to spend with Son 2, who doesn't have lessons after lunch on Thursdays. What better way to spend time in mid-June sunshine than to cycle off together to the local blueberry farm? 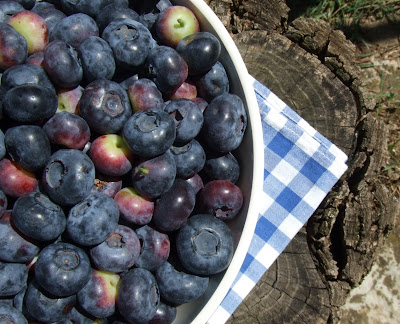 We greeted Madame, the elderly mother of the farmer, as we cycled in though her rustic gateway. She was sitting in the shade, wearing a housecoat and a fine straw hat with a blue ribbon, reading a book. Another good way to spend a sunny afternoon! Son 2 and I picked 1.8 kilos of blueberries (and ate a few grams more) and had a throwing competition with a few unripe berries that had come off in our hands. He won, but I won the pickers' prize. 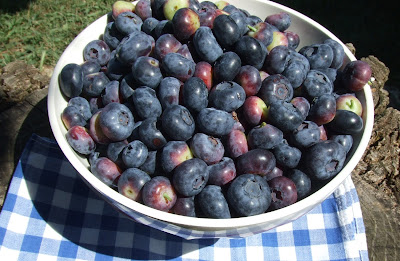 Interestingly, Son 2 doesn't actually eat blueberries. He's an arch-conservative of the taste world, prefering a very limited range of flavours and textures. However, he was tempted (who wouldn't have been?) to try the fruits of his labours, and asked if I thought it was a good idea. I encouraged him to give it a go, and to expect an unusual flavour, which wasn't to be interpreted as a bad taste... he popped a really ripe berry cautiously into his mouth and promptly had a dizzy spell! He and I were both mystified by this, but I suppose it may have been an adrenalin reaction to trying something new. He said the taste wasn't exactly that bad! Tomorrow morning (thanks to a cancelled lesson) I shall get baking...
Posted by Floss at 5:15 PM

Oh, I love blueberries.They are my berry of choice for topping cereal
Jane x

We love blueberries here! So much so that we've just bought a bush to plant in the garden ...
I wonder how your baking is going? Blueberry pie? Delicious !
Happy days to you Floss :-)
xx

Oh they look - be amazed if many last till tomorrow!! Blueberry muffins would be a favourite here.

Yummy! What will you bake? I vote for pie.

Beautiful blueberries! One of my favourite fruits. I freeze bags and bags of them to eat in the winter, with yogurt, for breakfast.

Aren't blueberries supposed to be food for the brain? Guess that one went straight to work...