Marie-Antoinette and the Midden 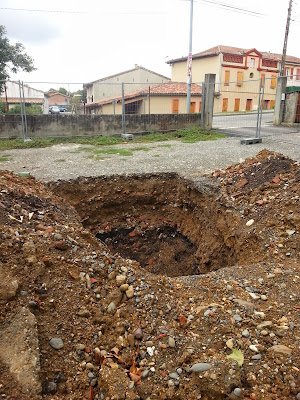 Holes in the ground may be a nuisance to some, but to an archaeology-lover they are a magnet! I know that before the old school (1900s) and play centre (1920s) were built, this area was the livestock market. Son 2 studied photos of it in school, looking at how life has changed since the days when farmers drove their cattle and geese into our town for sale down the hill from the church.


Ben and I were passing the other weekend and decided that the ‘stuff’ piled up next to the hole was just too interesting to ignore. We spotted a huge ox shoulder-blade and many other bones, indicating that meat as well as livestock was sold around here. 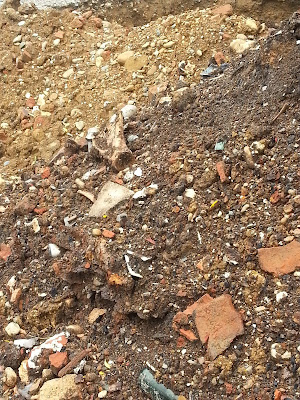 There’s so much ‘stuff’ in the hole – in layers as you can see – that it’s clear that the area was covered with rubbish at some point, probably to form a base before the car park surface was laid.


It’s hard to pin down exactly when the layers were formed, but we seem to have a ‘pre-school’ market layer, and a ‘post-school’ layer of 1950s and 1960s bits and bobs which probably just pre-date the car park. 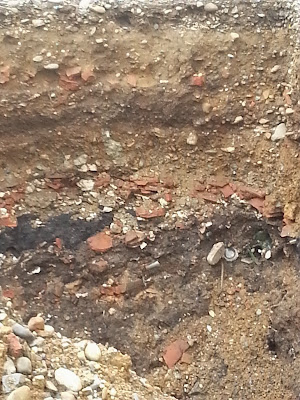 You might feel that rubbish from within living memory is, well, just, rubbish, but it’s from a very desirably ‘retro’ period and tells more about life in our town in those days than finding the same things on a Vide Grenier stall, so I rather enjoyed peering through the fences and picking out a few things from the spoil heap.


Well-washed, they look rather special around the house.


Four little bottles, glittering, iridescent and impossible to capture in a photo. 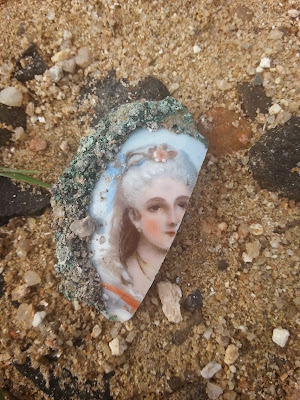 And Marie-Antoinette, a Limoges ‘cameo’ – a very popular and inexpensive form of jewellery from the 1950s and ’60s - although I can’t find a photo of this specific cameo on the net, there are many, many others for sale, some of them in the little bronze setting which has corroded around this fragment. I bet someone was upset when this broke – maybe she still lives in our town! Wouldn’t she be amazed that her treasure has resurfaced after all these years?
Posted by Floss at 2:24 PM

My grandmother always told me to look for the garbage heaps on old homesteads, for there were treasures to be found! I find your hole very interesting indeed!

How wonderful if you could find the other half of the cameo.

I wondered if this was going to be a post about finding Marie Antoinette in a midden à la Richard III in the carpark!! (I suppose that should be à le Richard...!!) But it is a beautiful little cameo.

This is literally digging through the past. I remember an assignment in school where the teacher brought in his garbage for a week and in groups we sorted through it, discovering what we could about his family. Different groups had garbage from different rooms.
The cameo was/is very pretty.